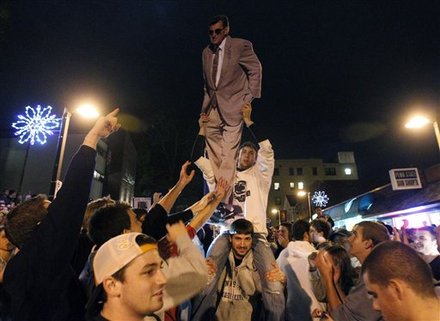 Joe Paterno has been fired by Penn State. And in the aftermath of it, thousands of PSU students took to the streets in support of the man who allowed more than a dozen children's lives to be ruined.

When I was 5, something happened to me that was not unlike what happened to the kids in Jerry Sandusky's "charitable" program. And if I knew that somebody had the opportunity to put a stop to what my attacker did, but instead only "informed his superiors," I'd hate that somebody almost as much as I hate the person who attacked me.

Joe Paterno did not commit a crime. He also did not stop a crime. He could have stopped it. I'm tired of hearing his defenders saying that he followed "proper procedure" by informing his superiors. You know what proper procedure is when you hear that a 55 year old guy is showering with and fondling an 11 year old boy? Call the police.

Anything short of that is not enough of an effort. Even Paterno admits he "could have done more."

But last night in College Station, PA, we saw thousands of students take to the streets in outrage. More people were more upset at the firing of an 84 year old man than they were at the molestation of over a dozen 7-12 year old boys. More people were more enraged at Paterno being forced out of Happy Valley, than they were over these defenseless boys being forced to participate in gruesome sexual acts.

They're rioting over a football coach being fired. Who rioted over the molestations? Where are our priorities?

We have one pervert who is unwilling/unable to control his disgusting urges. Then we have a few dozen people (including Paterno) who helped cover things up and placed the importance of Penn State Football above the well-being and safety of these boys. And now we have thousands of people taking to the streets in support of one of the most instrumental people in this cover-up. Why? Because he built a library on campus? Because he won 400+ games? Because he was the "father" of Penn State?

"We Are Penn State" is a motto of that school. It started as an anti-Segregation chant that originated when the school would play in the South. Now the chant has been used in defense of someone who placed Penn State Football ahead of the safety of young boys. That chant has been used in defense of a man who had the power to stop boys from being raped and all he did was "inform his superiors." "We Are Penn State" has become a slogan of people who support a football coach more than they support the well-being of young boys.

I'm glad the PSU trustees did the right thing and fired Paterno. And Paterno can ask for prayers for the victims, but one phone call to the police would have done so much more. Paterno could have been a guardian angel to those boys. Instead, he turned a blind eye. The sin is on his head. And the people defending him are defending a man who turned a blind eye to rape and molestation.