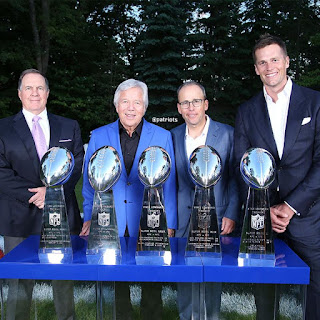 ESPN's Seth Wickersham's "Beginning of the end" piece on the Patriots claims there is a power struggle at the highest level of Pats' leadership: among the owner, the GOAT coach, and the GOAT quarterback. True or not, what the report conclusively proves is that the sports world is obsessed with everything the Patriots do.

Many of the pieces to Wickersham's puzzle seem to fit. I can imagine Bill Belichick grumbling about being coerced to trade Jimmy Garoppolo. I can imagine Tom Brady being worried about the security of his position as starter. I can imagine Robert Kraft interfering in an effort to alleviate tensions and to make his star QB happy. So there's a possibility it's all true.

But there's more than a possibility that the Patriots are the center of the sports world. That's an absolute certainty.

Even when they don't play, they're the top story. Just a whisper of dissension in Foxborough, and it's breaking news. The narrative of Garoppolo's success in San Fran is told as a Patriots' story. DeflateGate was national network news, not just sport news, and it endured for months. Compare that to the brief amount of time spent discussing the Seahawks violating concussion protocol (the media spent less time on that than Russell Wilson spent in the medical tent). People are obsessed with everything the Patriots do.

So while other New England fans might fret about tension behind the scenes, while other New England fans start blaming Bill or Tom or Bob for a breakup which hasn't happened yet, I'm just going to enjoy the fact that the sports world orbits around Foxborough, that Gillette Stadium is the center of the football universe. I'll enjoy it, because 20 years ago the Patriots were barely relevant, and 2 years from now the same might be true again.