Why the Celtics Shouldn't Trade Rondo 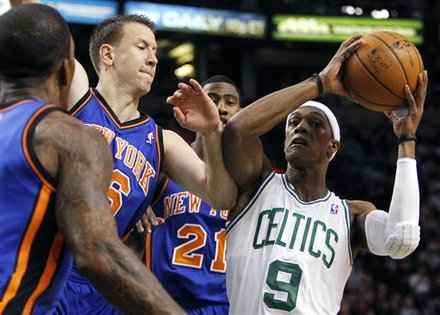 I don't think the Celtics are Championship contenders. So I wouldn't mind if they traded some of their big names in an effort to build for the future. This team, as currently assembled, has no future. And their present isn't that good either. People in this town are exhilarated to win 4 straight and improve to 19-17, thus tightening their grasp on 7th place in the East.

One player that shouldn't be traded, unless you got significant compensation in return or could acquire a clearly superior player, is Rajon Rondo. Yesterday's triple-double was the latest example of his explosiveness. He's young, talented, and he helps you win games.

We know Rondo's faults. They've been meticulously and repeatedly documented the last few months. Never have so many written so much about such a small number of minor shortcomings. And those in favor of trading him repeatedly say stuff like "you can't build a team around him."

There are better point-guards out there. But they're not cheap to pay for or easy to find. And it doesn't seem like Rondo's value in a trade would be very high. So how does trading your only young talent for medium value help you build for the future? How does dropping your youngest star help your future?

This is a big story. But could you imagine how much bigger it would be if those evil Patriots were involved?

The Saints allegedly managed a pool of cash up to $50,000 and rewarded defensive players for inflicting injuries on opponents. Knocking out an opposing player was worth a $1,500 bonus. A "cart-off" was worth $1,000.

Defensive coordinator Gregg Williams oversaw the fund - with the knowledge of head coach Sean Payton - back in 2009 when the Saints won the Super Bowl.

The amount of the bonuses is low for pro athletes, but it's still unauthorized compensation that goes beyond the salary cap. And that's against the rules. No asterisks for the 2009 Championship necessary, but the Saints should be severely punished for running such a fund.

The nature of the bonuses is kind of sickening. Cart-offs? Does a player get a new car for ending a QBs career? Then again, it's a violent sport. People don't hit each other with the intent of NOT hurting each other.

Still, the whole knockout and cart-off thing means players are encouraged to go for the head and legs. The NFL has gotten serious about injuries from those kinds of hits and this is their chance to fully demonstrate that seriousness.

It's horrible for PR. The NFL suspends so many players, fines them so often for dirty hits. They can't let programs like these continue now that they've been unearthed. And the fact that the head coach knew about it is all the more damning.

The problem isn't localized to New Orleans. And I'd be utterly stunned if there is a franchise in the NFL that has never had such an informal Pain Payment Program at one point in time.

It is a contact sport. Injuries happen. But ultimately injuries should be viewed as part of the game, not the goal of the game.
Posted by rob at 11:00 AM No comments: 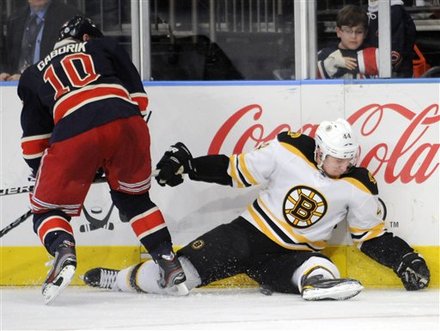 You can't help but respect the New York Rangers. Their style and strategy is so similarly to the Bruins. Excellent goaltending, mistake-free defense, offense from multiple sources, and an unwavering willingness to drop the gloves and fight. There's no blueprint to beat them. No schemes or tricks. You have to out-execute them. You have to make more plays, win more battles, commit fewer errors.

Yesterday afternoon the Bruins made fewer plays, won fewer battles, and committed more errors. Even if the B's had gotten a few bounces and won, I wouldn't have been happy with their performance. They're inconsistent. They've been inconsistent all season.

Some might gripe that bad luck cost the Bruins. A puck ricocheted off Greg Zanon's stick then his body and into the Bruins' net. Another puck bounced around behind Lundqvist without crossing the line. Oh and there was that weird non-icing call in the Islanders game on Saturday. And don't forget about the injuries to Peverley, Horton, and now Paille, Rask, and Ference.

These are the types of excuses you'd expect from Yawkey Way, not Causeway Street. And they are just that, excuses.

Did the Bruins play at their best, or even close to their best against the Rangers? Maybe for a 20 minute chunk of the game. The other 40 minutes were a display of mediocrity punctuated by the occasional bad decision. Chara passing to Kelly in the middle of the ice and with three Rangers in the area. New York's second goal saw Carl Hagelin streak down the ice, burning the Bruins' defensemen and making them look like they played free safety for the New England Patriots.

The timeout was effective. The Bruins played much better after that. The Rangers played much worse. Then the Rangers answered the Bruins' wave of momentum with one of their own. And the B's never answered back.

It's been a long time since we've seen 60 consecutive minutes of quality hockey from this team. Even during their winning stretch, they'd play 40 minutes of so-so hockey, turn it on in the 3rd period, and win. And we praised them for it.

I don't doubt they'll be able to advance past the likes of Ottawa or New Jersey in the playoffs, even if they're not stringing together more than 40 straight minutes of good hockey. But when it's time to face Philadelphia, or Pittsburgh, or the Rangers, there will need to be more consistency.

Bruins are in Toronto tomorrow night.