The best young hockey players (under 20) in the world have converged in Alberta for the 2012 World Junior Ice Hockey Championship. Canada is the favorite to win, not only as the host country, not only as the 15 time winner, but as the most talented team. However, they haven't won since 2009.

There are two groups of 5 teams in the round-robin stage. The top 3 teams from each group advance to the elimination stage, with the group winners receiving byes to the semifinals. Here are the groups:

The US has already thrashed Denmark 11-3, while Canada dominated Finland 8-1. Also, Sweden beat Latvia 9-4, and Russia took care of Switzerland 3-0. So no surprises so far.

The US will be playing Canada on New Year's Eve at 8pm. They'll play Finland on the 28th, and the Czech Republic on the 30th.

Other things to look for include some young Bruins and a few local college kids. Russia's Alexander Khokhlachev was drafted 40th overall by the Bruins in this year's draft. 9th overall pick Dougie Hamilton is playing for Canada and scored a goal last night.

The WJHC is a fun tournament to watch. The hockey's fast, it's intense, the Canadian crowd will be into it, and the shaky goaltending and inexperienced defense leads to some wide open play and lots of scoring.

The finals will be played on January 5th.
Posted by rob at 1:00 PM No comments:

We've got quite a few bowl games this week. Two today, two tomorrow, two Thursday, Then even more as New Year's approaches. My record for picking these games hasn't been bad. 3-5. Better than I was doing with picks earlier in the year.

Today - 4:30 PM - ESPN
Little Caesars Bowl - Detroit, MI
Western Michigan Broncos vs. Purdue Boilermakers (-3)
WMU has a good offense, but a poor defense. They can throw the ball. Purdue is in the middle of the pack defensively and offensively. The polite word is "balanced," the appropriate word is "mediocre." Kalamazoo is only 2 and a half hours from Detroit. I think WMU has the edge in this game. Tonight - 8:00 PM - ESPN
Belk Bowl - Charlotte, NC
Louisville Cardinals vs. NC State Wolfpack (PK)
UL lost to Florida Int'l, and Marshall. NC State lost to BC. Neither of these teams impresses me. NC State will have the crowd behind them. Louisville will struggle to put up points. I'll take a 4-4 ACC team over a 5-2 Big East team. 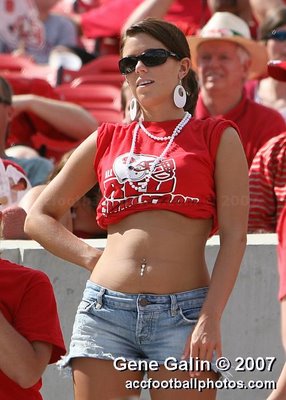 Wednesday - 4:30 PM - ESPN
Military Bowl, presented by Northrup Grumman - Washington, DC
Toledo Rockets (-3) vs. Air Force Falcons
Toledo lost 4 games. To Boise State, Ohio State, Syracuse, and Northern Illinois. That's not awful for a MAC team. That loss to NIU was 63-60, which sums up Toledo's greatest strength (their offense) and biggest weakness (defense). Air Force doesn't have a defense that's anything special. They can run the ball (320.3 yards per game), so either they'll keep the ball away from Toledo's explosive offense, or they'll fall behind and need to chew up clock to catch up. Air Force isn't equipped to take full advantage of Toledo's porous defense.

Wednesday - 8:00 PM - ESPN
Bridgepoint Education Holiday Bowl - San Diego, CA
California Golden Bears vs. #24 Texas Longhorns (-3)
Cals 7-5 record was inflated by wins against some bad teams. Texas is in a similar boat, only not as bad. The Longhorns have more talent in this battle of mediocrity. They also crushed UCLA, whereas Cal lost to the Bruins.

Thursday - 5:30 PM - ESPN
Champ Sports Bowl - Orlando, FL
Florida State Seminoles (-3) vs. Notre Dame Fighting Irish
Two powerhouse programs that were expected to do well in 2011 but fell very short. I simply do not believe in Notre Dame. Sure, they won 8 games, they beat Michigan State, but their schedule is packed with bad teams. BC, Maryland, Purdue. FSU, on paper, is a much better team. And they'll be the better team on the field as well.

Thursday - 9:00 PM - ESPN
Washington Huskies vs. Baylor Bears (-9.5)
Washington lost to pretty much every good team in the Pac-12. They allow 33.3 points per game, which does not bode well for a matchup against RG3 and the Bears of Baylor. This game should see plenty of points. But Baylor will have more of them. Much more of them.

Bruins Put Up a Snowman Before Christmas 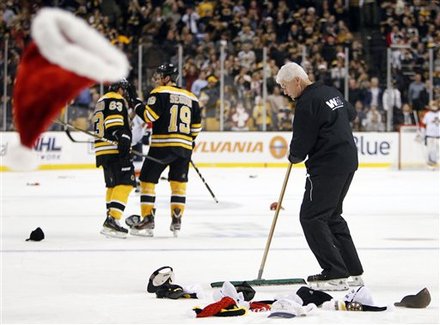 The Bruins scored a touchdown and then a two point conversion Friday night, taking full advantage of a Florida team that was visibly exhausted. The Panthers had played the night before in Ottawa, had played 3 games in 4 days, and were missing 7 forwards. So anything less than a Bruins win was unacceptable.

What I liked most about this win, apart from the TD Garden crowd chanting "Merry Christmas," was how the Bruins continued to apply pressure. In years past, the B's would get a 2 or 3 goal lead, then try to cruise for the rest of the game. And it frequently bit them in the ass. See: 2010 playoff series vs. Philadelphia.

But this season, we're seeing the Bruins improve once they get a lead. They smell blood and the water and it excites them like piranhas. That's why we've seen them score so many goals within a single minute.

Obviously Brad Marchand was the star of the game, netting his first career hat-trick. Give Seguin some additional credit for that assist on Marchand's third.

What might be a bit overlooked is that Tuukka Rask stopped all 30 shots he faced. That's 2 straight shutouts for Tuukka, plus the clean 3rd period he played in net in Columbus. That's 7 periods and 155 minutes since he allowed his last goal, 4:50 into the 3rd in Winnipeg on December 6th. And he's this team's backup goalie.

The Bruins are 20-2-1 since the end of October. And it's because they're getting contributions from Marchand, from Rask, from Seguin, from everyone.

They don't play until Wednesday night in Phoenix. It's the start of a 3 game road trip that will stretch into 2012. 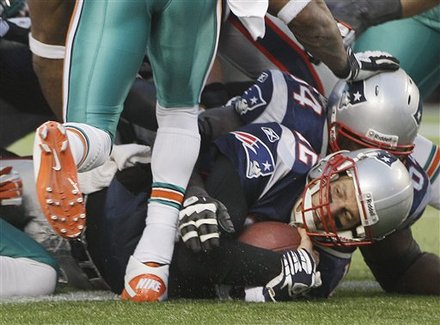 It was ugly. And if the Pats were playing another team, it probably would have been a loss. Instead, the Patriots came back from a 17-0 deficit and with that win clinched a first round bye.

I've been saying it for weeks now. The Patriots' success and failure is determined by how well the offense does. The defense is what it is. In the Buffalo loss, Brady threw 4 picks. In the Pittsburgh loss, the offense struggled to get first downs. In the Giants loss, the Pats turned the ball over 4 times.

In Saturday's game, we saw the offense struggle in the first half, and the team was doomed. In the second half, the offense did well, and the team looked great. The Dolphins helped by turning the ball over. That's what alarms me. If the Patriots offense has a bad half, or faces a good pass rush, and they're playing a quality team, will they be able to come back? Can they depend on unforced turnovers in the 2nd half?

For this team to make a deep playoff run, the offense has to be amazing. And they have to be at least good on just about every drive.

They've got a bye, which is huge. It's advancing a round in the playoffs before the playoffs even start. But they need to play better if they want to advance. And it's not the defense that needs to improve (I'd argue that they can't improve), it's the offense.

Pats host the Bills on Sunday and can clinch the #1 seed and homefield with a win. I'm sure the Pats will also be looking to get a measure of revenge for their 34-31 loss to Buffalo in September.