It's that time of year again. And the four college hockey teams of Boston will meet for the 59th time to determine which is best. And once again, the Eagles of BC and the Terriers of BU are the favorites.

BU and BC have won every Beanpot since 1993, and even though they'll be meeting in the opening round, that trend will likely continue. BC stands as the #1 team in the country, and BU is no slouch at 14th.

BC is averaging 4.8 games per game, which is simply ridiculous. And with goaltender John Muse, who has a few NCAA Championships under his belt, it's hard to pick against them. BC has defeated BU twice already. They won 9-5 at Agganis Arena, then 5-2 at Conte Forum. That being said, this is BU's tournament. So don't expect a blowout.

I do think BC will win, though. They're ridiculously deep. They roll so many quality lines, and everyone skates with speed. That speed draws penalties, which lets their Power Play dominate the game. It's just a perfect formula for college hockey. BC is gunning for National Championship #5, and that road starts in the Beanpot. For the last 3 years, the Beanpot winner has gone on to win the NCAA title.

In the early game today, Northeastern plays Harvard. NU has taken a step back this season, but Harvard's taken more than a few. The Crimson are 4-17, with those 4 wins coming against RPI, St. Lawrence, Army, and Colgate. Northeastern's 8-11-6 record is hardly impressive, but they're much better than Harvard.

NO PARADES FOR SCHADENFREUDE 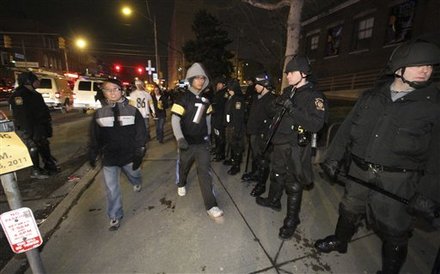 Schadenfreude (noun): enjoyment obtained from the troubles of others (German)

As a Patriots fan, it's nice to see the Steelers lose. Apart from Mike Tomlin, there's really not much to like about that team. By the way, had Pittsburgh won, I would have written how Mike Tomlin doesn't get nearly enough credit as he deserves. Probably because he's not as secretive as Bill Belichick, not as preachy as Tony Dungy, and not as loudmouthed as Rex Ryan. The guy just coaches a football team and does a damn good job at it.

As a Patriots fan, and as someone who dislikes the Steelers, and who has an intense animosity (coupled with respect) toward Ben Roethlisberger, I'm relieved this morning. But I'm not happy. I'm not from Wisconsin. My team got bounced, early, again. So I recommend to my fellow Patriot fans not to smile so smugly today. Because for the last two seasons, we've enjoyed watching NFC teams doing our dirty work, and eliminating our rivals.

These games really do come down to execution on a few key plays. Last night, Pittsburgh's turnovers pretty much cost them the game. But there were also potential big plays that never materialized. Green Bay muffed an early punt, but fell on the ball. The entire shape of the game changes if that one play changes.

It's a League of execution. So while Patriot fans shouldn't be jumping for joy for a parade in Wisconsin, they also shouldn't be moping about. Our team in Foxborough, though imperfect, has sufficient talent to be among those 8 to 12 good NFL teams. They just need to execute. It's simple to say, difficult to do.
Posted by rob at 11:00 AM No comments: 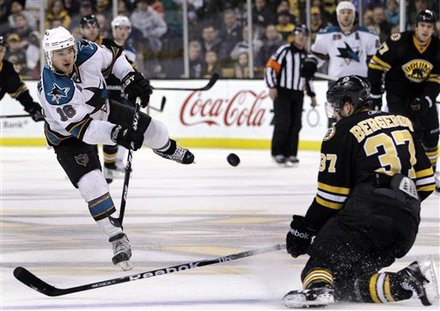 After the Bruins' hard-fought (literally) win over Dallas, you couldn't help but feel optimistic. But as they've done with frequency for the past 3 years, the B's followed a strong performance with a flat one.

They absolutely dominated the Stars, and if not for Rask and the refs, the score would have been closer to 8-1 as opposed to 6-3. Then they give us 60 minutes of mediocrity against San Jose. They managed 26 shots on Niemi, very few of which came from good scoring positions. The thing about Niemi is that he'll give up some juicy rebounds. The Bruins didn't collect any of them. Give credit to the Sharks, who usually had 4 bodies positioned around Niemi at all times, and clearing those rebounds. They outmanned and outmuscled the Bruins down low.

They outmuscled the Bruins everywhere, and that's been a repetitive theme of Sharks/Bruins games. The Sharks are bigger, they skate with power, they win battles.

The Bruins had 4 power plays, and failed to get a shot on goal for 3 of them. That's simply sad.

Krejci played like an utter turd. I don't know how he received the 3rd Star. Maybe it was a typo. Maybe it was a joke. I wouldn't be surprised if I heard he played the game drunk, he was that careless with the puck. It was the worst game I've seen him play. He was by far the worst player on the ice. His shorthanded foolishness cost the Bruins a goal, and who knows how many scoring chances he cost Lucic and Horton with his giveaways.

It's the same old story with this team. Ups and downs. Fighting for 60 minutes, then a few days later relaxing for 60. Playing with intensity and focus, then making stupid mistakes. And simple adjustments fail to be made during the game. Niemi gives up rebounds, so why not try some bad angle shots? Bad angle shot=good angle rebound, as this kindergarten level diagram illustrates: I just don't expect much from this team. Not with these same repeating lapses in focus and intensity. Not with this coach. This cast of characters. This GM. Guys like Thomas, Lucic, and now Bergeron and Marchand have carried this team. Along with the defense. But they've been undermined by the likes of Michael Ryder, Blake Wheeler, Nathan Horton, and Claude Julien.

We have a good team in Boston, but they're too good at self-sabotaging themselves.

A few days off, then a short but tough stretch of games. The Bruins are 2 points ahead of Montreal and host them Wednesday night. Then it's a home and home with Detroit, the #2 team in the West. Time for the B's to bring their A Game.