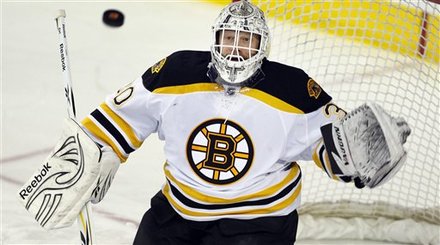 The Flames were hot coming into this game. They hadn't lost at home in regulation since January 3rd. They'd won three straight (scoring 17 in those games), and were 11-1-2 in their last fourteen. But the Bruins matched them. And thanks to some fortunate bounces, and the best goalie in the NHL, the B's continued their winning ways.

New acquisitions Rich Paverley and Chris Kelly were solid. And the Bergeron line once again was the Bruins' best. Marchand's 19th goal of the season came off an exquisitely lucky bounce, but that bounce came after some hard-nosed forechecking by Bergeron, and crafty passing by Recchi. Good things happen to good players.

I liked Seguin skating on a line with Thornton and Campbell. He's not just playing out there, he's fighting. He's fighting to keep the puck, to take it, and ultimately he's fighting for ice time. He probably won a little bit last night.

At times, the Bruins struggled to make plays coming out of their own zone. They just couldn't connect on their passes. I think that among the top teams in the NHL, the Bruins might be the worst at passing the puck.

Thankfully, they have Thomas, who looked much crisper after a few days off. Thomas is a candidate for the Hart Trophy (MVP) because he covers for so many of his teammates' mistakes. He's like a Gold Glove first baseman who saves his infielders from throwing errors. His robbery of Olli Jokinen was beyond human.

Thomas will have a few days off as the Bruins trek further west to Vancouver, home of the #1 team in the NHL: The Canucks. Who boast a 21-4-5 record at home. They're #1 in goals scored, and #1 in goals allowed. Bruins @ Canucks, late night Saturday.