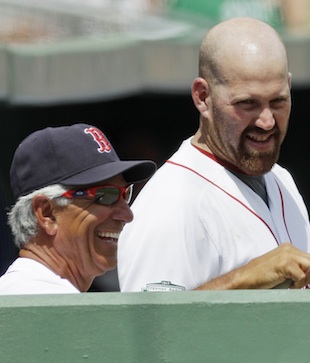 Kevin Youkilis is returning to Fenway Park tonight. And even though most Red Sox fans agree that he probably had to be traded, there is still a strong undercurrent of support and appreciation for the man who brought a Paul O'Neill attitude to the corner infield, who won a Gold Glove at first base then was willing to move to third, who was an associate member of the 2004 World Series winning Red Sox and a very full member of the 2007 World Series winning Red Sox.

Everyone seems happy to welcome Kevin Youkilis back, especially the promotions people in the Red Sox ticket office. Everyone except Bobby Valentine.

It doesn't seem like Valentine and Youkilis saw eye-to-eye. It's not difficult to figure out why. Valentine sees himself as an Alpha. Youkilis is always grumbling and gritting his teeth. He's a dissenter. It was natural for these two to tango.

Even now, when April is a distant memory, Bobby Valentine is still harping on how his ex-player reacted to stuff that he told the media months ago.

Before I discuss this further, let's remember that Youkilis is gone. He's a member of another team in another city in another division. He is no longer the charge or responsibility of the Red Sox or of Bobby Valentine. He's out of here, absent, long gone. He's an opponent now, and his time as a member of the Red Sox is very much in the past. It is long since time to move on.

So why is Bobby V talking about him in the present tense? Everyone, including Youkilis, seems to have moved on. So why can't Bobby V say "he was a good player but the circumstances dictated that we do something because we had too many players for too few spots in the lineup." Why can't Bobby V implement worn-out, yet honest lines such as that?

Instead, Valentine placed all responsibility for any player-manager relationship strains on Youkilis: "I think the comment I made early, he made a big issue out of, and I don't think he ever wanted to get over it... I have no idea. It was whatever he wanted it to be."

So Valentine is saying that the ex-player who has been traded and played well for his new team couldn't get over something? Seems to me like Valentine can't get over Youkilis.

In retrospect, it doesn't seem like Valentine was ever a big fan of Youkilis. Valentine has been diplomatic and defensive when discussing all the other injured players on the Red Sox. With Youkilis, Valentine publicly questioned his work-ethic and his commitment to the team.

There are plenty of players on the Red Sox whose commitment and work-ethic are worthy of scrutiny, Why did Valentine pick Youkilis'?

Maybe it was because Youkilis was alleged to be the so-called "snitch" that leaked information to the media about Josh Beckett and friends getting liquored and chickened up in the clubhouse.

Did Valentine target Youkilis? Did he think he could rally the disjointed Red Sox clubhouse and unite them against a common enemy?

Why is Kevin Youkilis a major issue for Valentine? I thought the point of trading Youkilis was to prevent him from becoming an issue.

But I guess Valentine wants to try to unite his team around a common cause. Valentine feels the need to be responsible for everything. That's why he blames Youkilis for creating a strenuous clubhouse atmosphere. And now Valentine wants to be the one who gets credit for getting Youkilis out of here and allowing that atmosphere to calm. Valentine's remarks simply provoked the beast into acting like a beast. And Valentine helped remove the beast. Bobby V wants credit for the tranquility he's helped create in the Red Sox clubhouse.

Well be careful what you wish for, Bobby, you just might get it. You seem hell-bent on being responsible for what happens with this team, and in the end, you likely will be. Don't worry. I'm sure Francona will get a job managing a baseball team and ESPN will be looking for a loud-mouthed, opinionated, frequently incorrect jerk to help boost ratings. Bobby V is the Skip Bayless of baseball managers. 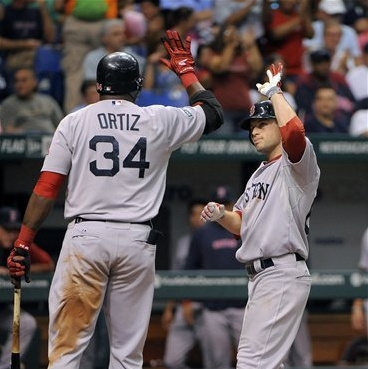 This was an important series win for the Sox. They needed to start the second half right. They needed to beat teams like the Rays who are competing for those Wild Card spots. To finish above the Rays in the standings, they need to beat them. It's very simple, but very true.

I'm not overwhelmed by the Sox performance this past weekend, though. Saturday was a winnable game that was lost. And the Sox gave Tampa Bay plenty of opportunities to turn the other games around.

Honestly, are you impressed with what Josh Beckett and Alfredo Aceves did yesterday afternoon? Beckett was a slow-motion disaster in the 1st inning, then Aceves nearly blew a 4 run lead in the 9th.

The Sox are only 1.5 games out of the 2nd Wild Card spot. But there are 4 teams between them and Baltimore. In this race, the name of the game is separation. What will separate the Red Sox from these teams in the final standings?

Winning a series like this is important because it helps give them separation from Tampa Bay. A sweep, obviously, would have given them even more separation. Had they swept, they'd be 0.5 games out, ahead of Tampa Bay, and tied with Oakland and Detroit. Only the two Wild Card teams (the Angels and Orioles) would be ahead of them.

If Josh Beckett can pitch as well as he did from the 2nd inning on, that can give the Sox the necessary separation to break away from the pack. Jacoby Ellsbury went 3 for 5 yesterday, he could prove to be the separation from the other teams. If Adrian Gonzalez can hit in the clutch, if Will Middlebrooks can get hot again, if Clay Buchholz can stay healthy and effective, if Mike Aviles can hit the occasional homerun (as he did yesterday), these could all be the separating factors that allow the Red Sox to get one of the Wild Card spots.

One thing they must also do is be able to score against good pitching and hold their own against good teams. Speaking of which, the White Sox come to town for 4 games. I'll be content with a 2-2 split in this series.

Tonight Aaron Cook faces Dylan Axelrod, who has been a part-time starter for the White Sox. But none of the Red Sox have much experience against him, and that's frequently not a good sign.