I don't follow the NBA. I'm a very passive Celtics fan, only really paying attention in the playoffs. My basketball IQ is lower than Shaq's career free throw percentage. Maybe lower than his three-point percentage. I'm trying to follow this Doc Rivers-LA Clippers drama, and it sounds so much like someone describing the plot of a soap opera.

Blake and Chris don't like each other, but Chris wants to play with Blake because Blake helps them win. If Chris can't play with Blake, or with Kevin and under Doc, he'll leave LA and go somewhere else. That's a love/hate work relationship there.

Doc and Kevin want to stay together. And Paul wants to stay with Kevin. If Kevin leaves, Paul might quit. If Doc leaves, Kevin will probably quit. If Doc, Kevin, and Paul leave, Rajon will take over the business in Boston. Classic love triangle with a young buck waiting in the wings to take over the company.

Meanwhile, in New York, the Commissioner of the Association, David, has stepped in and declared that Doc and Kevin cannot go to LA, and DeAndre can't go to Boston. It's like Stern has burst into a wedding just as the priest asks "If anyone has any objections to this marriage, speak now or forever hold your peace."

It's As the NBA Turns or Days of Our Stern.

Bruins Back to Square One With Chicago 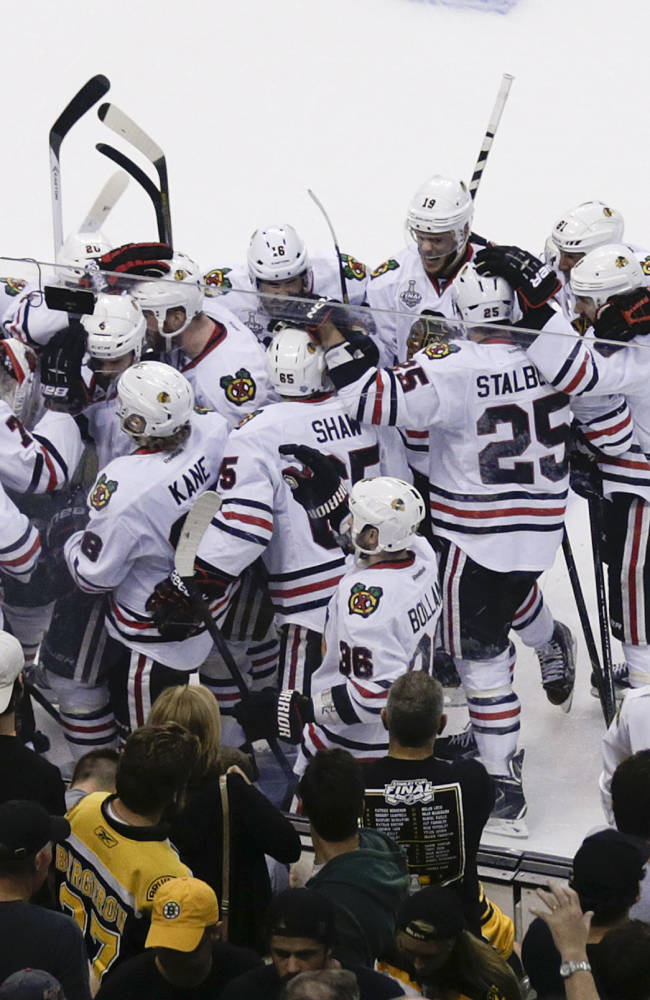 The Blackhawks took this game by the proverbial horns and never let go. The Bruins spent the whole game chasing them. And then in the overtime the B's played conservative try-to-be-mistake-free hockey, while the Blackhawks gambled and went for it. And the result was a Chicago win, and a 2-2 series. It's now a best of three series, and the Blackhawks have home ice.

Some things that alarm me about this game are the names of the players that scored for Chicago. Kane, Seabrook, Sharp, Toews. Kane hadn't scored in this series, and Toews hadn't scored since May 25th, his only other goal of the playoffs. Some of these Blackhawks were sleeping giants, and they woke up in Game 4.

For the first time, the Blackhawks beat Rask straight-up for a goal. The overtime goal was a puck Rask should have stopped.

Another Bruin that disappointed was Chara. For two Chicago goals, Chara was sitting on his ass on the ice, pushed down somehow. He was -3 in this game, and that's very rare for him. He hasn't been -3 in a game since March 11, 2012 against Pittsburgh.

All the aspects of the game that the Bruins dominated in Game 3, the Blackhawks improved on. In faceoffs it was essentially even, Chicago won 39 and lost 38. In special teams the Bruins scored 2 power play goals but allowed a power play goal and a shorthanded goal. And as weak as Crawford has looked on his glove side, Rask also gave up some goals he could have stopped. Rask allowed the same number of goals in this game as he had allowed in the last 5 games combined.

The Blackhawks also got offense from their myriad of star players. Toews, Kane, Sharp, Seabrook. The Bruins grinded out offense, but most of their big names didn't score. Krejci didn't score, neither did Horton, neither did Marchand, and Seguin only managed 1 shot on goal and a -3.

So it's all starting over. 2-2 after four games, only three left, what's going to happen?

That's the billion dollar question. Will Rask and Chara recover and resume playing amazingly? Will Toews and/or Kane get hot and start scoring? Chicago's power play finally scored, will that continue?

As a Bruins fan, I'm worried. I feel like a giant has been awoken, and now the B's have a real fight on their hands. They are capable of defeating the foe, but everyone needs to chip in. Seguin can't be quiet anymore. Chara and Rask can't allow easy goals. All lines have to click.

Game 5 will be Saturday night in Chicago.

Photo Credit:
AP Photo/Charles Krupa
Posted by rob at 10:00 AM No comments: