I hate phrases like "changing of the guard" to talk about the evolving environments of a sport. Although Tom Brady and Peyton Manning took early exits from the postseason, and neither has won a title since George W. Bush was President, it's hard to eliminate them from the elite, uppermost echelon of quarterbacks in the NFL.

However, I think it's time we allow more names to populate that short list. It's no longer just Brady and Manning, then everyone else. I think it's Brady, Manning, Roethlisberger, and maybe even Rodgers.

What are the arguments against Roethlisberger's inclusion? His lack of eye-popping numbers? The help of a good running game and an excellent defense? But weren't those the precise arguments used against Tom Brady about 10 years ago? And since when has a QB won a Super Bowl by themselves? Ask John Elway and Terrell Davis, or Troy Aikman and Emmitt Smith. Better yet, ask Dan Marino and nobody else.

In this pass-happy NFL, Roethlisberger's numbers don't dazzle. Even if you extrapolated his 12 game performance into 16 games, he'd have thrown 23 TDs (tied for 13th with Garrard, Cutler, and Fitzpatrick), although with only 7 INTs. He would have been among League leaders for yards thrown, and his QB Rating was 5th at 97.0. So the numbers don't fizzle, either.

Those are good numbers. Even the TD number is good considering what sane coach would throw the ball on 3rd and goal at the 1 when Rashard Mendenhall is in the backfield? The whole "supporting cast" argument can go both ways.

Then there's his ability to win. He just does it. He makes plays when plays are needed. Apart from his experiences with the mid 2000s Patriots, he's beaten all comers in big games. He's won two Super Bowls, 3 AFC titles, and 10 playoff games. And he hasn't been a passenger along for the ride in those games, either.

So no matter what happens a week from Sunday, I think Roethlisberger has cemented a spot in that top tier of QB.

Then there's Rodgers. And unless he throws for 500 yards and 6 TDs, he might have to show us a bit more in years to come before being included in the Manning-Brady-Roethlisberger discussion. I don't get to see him often, being in the NFC. But I've yet to be thoroughly impressed with him as a player. So much so that even after a bad game, or a bad year, I'd be sure that he'd recover.

His numbers are gleaming, and his postseason performances have been admirable. A ring would go a long way to solidify himself at the top of the food chain. He certainly has the potential to reach such heights, but there needs to be more results over a slightly longer stretch of time.

So I'd say it's now a three horse race for the top spot among NFL QBs. They all have strengths, they all have slight weaknesses that can be used in an argument against them. Their biggest achievements have all come with assistance. And each of them plays the position in a different way, within different systems, that have all been successful.

But there's something about these three guys that transcends stats, and wins, and rings. There's an aura of strength around them. Opponents respect them, even fear them, in a way above and different from other QBs. I think that says a great deal more than passer ratings or playoff records.

BRUINS GO INTO BREAK WITH A 'W' 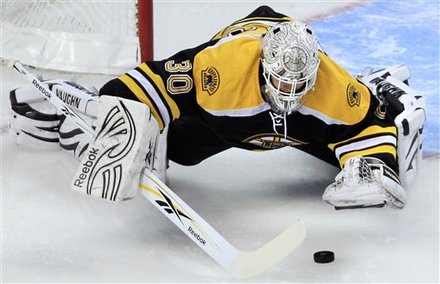 It wasn't as easy as it could have been. The Bruins allowed things to get a bit too interesting last night against the Panthers, but thanks to Tim Thomas, and some excellent scrambling in the last minute, they'll go into the break on a positive note.

Lucic scored his 20th goal of the season, his first ever 20 goal campaign and we're only at the All-Star Break. It was probably his prettiest of the 20, as he snapped a shot over Vokoun's blocker side. It was so much different from Lucic as a rookie. Back then, he'd blast shots in the general direction of the goal. This was a snipe, with purpose and intent. And it turned out to be the game-winner.

Tim Thomas was superb. Florida had a few rushes, and every time but once, Timmy came up with the stops. He's turning into something like Pedro Martinez in 2000. You expect a shutout every start, and it's shocking when he gives anything up.

Several Bruins showed dogged determination and ferocious character in the last minute of this game. Bergeron, Campbell, and Ference in particular. They carried the win home and it was truly enjoyable to watch them scrape and claw for the victory.

But not all was positive. Michael Ryder's 13:31 of ice time was horrendous. If this guy doesn't get a perfect tape-to-tape pass, he bungles the puck. He spends half his shifts drifting around, not doing anything. I'm fed up with him. I see guys like Horton struggling, but still making basic plays. Ryder just screws everything up. He's Dennis Wideman as a forward. 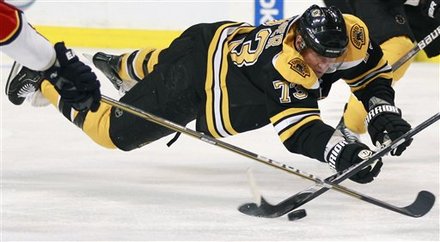 It's kind of a moot point with Savard out, but if Julien doesn't trust Seguin to play in the last 8 minutes of a 2-1 game, then maybe Seguin should be playing in Providence. He'd at least be getting the experience in those hectic situations, and then one day he could be a full-time NHL player.

Again, with Savard out, Seguin must remain in Boston. But even without Savard, he played less than 10 minutes last night. He's played about 605 minutes this year. He could easily have 800+ minutes already if he were in Providence. Tough minutes, Power Play minutes, shorthanded minutes, game deciding minutes. Instead, he's learning more about cheering his teammates than playing hockey.

Bruins don't play until Tuesday down in Carolina. With 50 games in the books, they're 4 points up on Montreal in the Division and 3rd in the East. That ain't bad. The All-Star Game is Sunday, but the more interesting Skills Competition is Saturday. Those are also in Carolina.