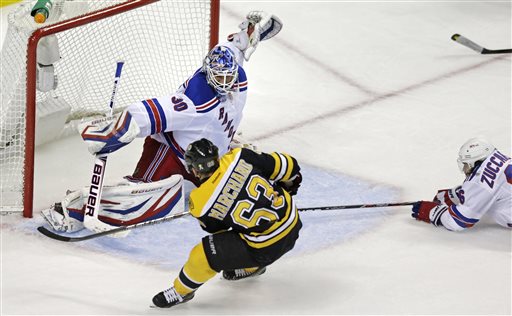 The first period of this game almost put me to sleep. I have never seen such boring hockey in the playoffs. I suppose both teams were tired coming off of bitter 7 game series. They grew accustomed to hating the Caps and Leafs. Familiarity breeds contempt. In the 1st period of this game, the Rangers and Bruins were essentially strangers, indifferent to each other.

It didn't take long for things to percolate. The Bruins' first goal seemed to ignite both teams.

The end result is great. The Bruins played better than the Rangers. The young defensemen filling in were solid. Not only did they not make mistakes, Torey Krug (who went to Michigan State, in case you didn't hear that mentioned a half-dozen times) scored a goal.

The Rangers didn't play their best. An unwise pinch resulted in a giveaway in overtime, Bergeron and Marchand took advantage, and that decided the game. It's great to see Marchand contributing to the offense again. He helped carry this team in the regular season, and it's critical that he step up in this series.

As I said in my pre-series thoughts, the Rangers lack that extra something that drives a team to win. They just don't have that edge, that special something, that pushes a team forward in the playoffs.

It's good the Bruins took advantage and won, but there were still some very aggravating aspects of this game.

Rask has to stop that second goal. He just has to. It wasn't a horrendous goal to allow, but that has to be stopped. Period.

The way Jagr plays is like if you're playing video game hockey with a friend, and the pass button on his controller is broken. The only things he can do are skate and shoot. He's got to remember how to pass the puck.

And just a reminder as to how old Jagr is, it's been 40 years since the Bruins and Rangers met in the playoffs. Jaromir was already 1 year old during that series. He gets tired after only 25 seconds on the ice. I think you have to consider giving some of his shifts on the 2nd line to Seguin. Then again, the 2nd line has performed very well since Seguin was moved down to the 3rd. Then again Seguin was on the ice for the Game 7 OT winner. So give Seguin a few extra 2nd line shifts, give Jagr a bit of a break, and I think everyone wins.

This series is going to be long, tough, and it's going to be decided by a margin the width of a dime. This game could have turned on a post, or if Rask didn't make a huge save in the 3rd, or if McDonagh doesn't make that pinch maybe the game goes on and into another OT period. A handful of plays will decide these games and this series.

So buckle up, Bruins fans. This will be a bumpy ride.

Game 3 Sunday afternoon, which is an advantage to the depleted Bruins. It gives Chara (38 minutes of ice time), Beregeron (27 minutes), Boychuk (27 minutes), and others a chance to rest and recover.