WHY I'M WORRIED ABOUT THE PATS/BEARS GAME

"Worried" might be too strong a word. But I'm not brushing this game off, as most people seem to be doing. The Bears are 9-3. The past few weeks, Jay Cutler has played within himself and his abilities. Their defense has allowed the 3rd fewest points in the NFL. They have the 2nd best run defense, and a decent pass defense.

They're not a stunning team, but they're solid. They're no pushovers, they're no "frauds" as some have claimed.

Plus the game is in Chicago. And the weather there Sunday evening will be quite bad. Temperatures below 20 degrees, snowy, windy. We've seen Brady excel in those conditions, but with that weather, anything can happen to the football.

The Patriots are 2nd in turnover differential. And since 2001, they're 79-3 when they win the turnover battle. In other words, protecting the football is of paramount importance to the Patriots.

So I think the Patriots will win, of course, but I don't think the Bears are "frauds" that will be "exposed" on Sunday. They're a solid team, and they've won 9 games for a reason. 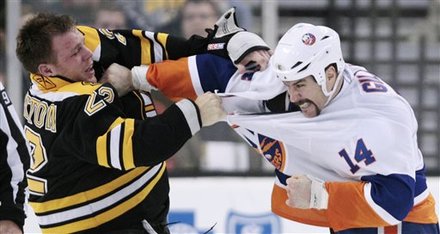 Normally, I'd criticize the Bruins for not utterly destroying a team as bad as the Islanders. Let's be honest, though. You don't need 100% effort or execution to beat that team. They're just awful, and actually kind of sad to watch. Thankfully, the Bruins beat them.

Milan Lucic scored his 14th and 15th goals in this game. Like pretty much all of his goals this season, they were hardly highlight reel snipes. But I like what he's been doing. He seems to have learned how to be a better player from his teammates. His puck-handling is better, perhaps learning from Krejci. His defensive play is better, thank you very much Mr. Bergeron. And like Mark Recchi, he now has an instinct to put himself in the right place at the right time. And that positional awareness is why he has 15 goals.

The second Bruins goal was a shorthanded score from Brad Marchand, his 4th, and 3rd shorty of the year. He's been a very nice addition to that 4th line, which plays so often in key situations, it can hardly be called a 4th line.

Andrew Ference had one of his better games of the season. His pass found Ryder in the high slot, giving the Bruins a 3-1 lead. And he also set the events leading to Marchand's goal into motion by winning a battle in the corner. He and McQuaid will need to play well the next few weeks, with Stuart out of the lineup.

It was nice to see Rask get a win. He played well, and it was refreshing to see him get his second victory of the season, even though he deserves a few more than that. And how relaxing is it to give the best goalie in the world a night off, and get to put the likes of Rask in there?

I'm calling the next 8 days Exam Week for the Bruins, because they've got some games that will test them, and allow us to gaage how good they really are. Here's what's coming up:

There's games against the 2nd, 3rd, and 4th best records in the NHL in an 8 day stretch, along with a divisional road game squeezed in. Not easy.