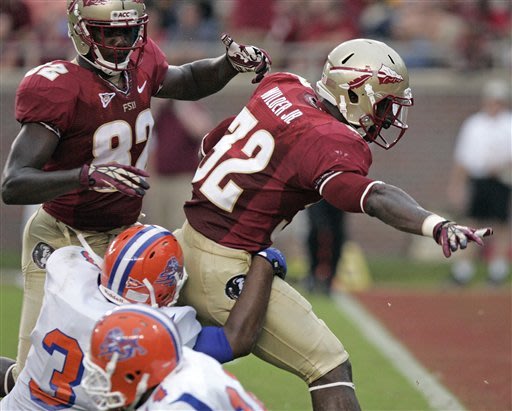 The Savannah State Tigers were losing 55-0 to Florida State in the 3rd quarter Saturday when both coaches agreed to end the game due to weather. The game had already been delayed by lightning, and more storms lingered in the area. It was in essence a Mercy Rule ending from God/Mother Nature for the Tigers.

A week earlier, Savannah State was the victim of an 84-0 pounding from Oklahoma State.

In the two losses Savannah State allowed 1,095 total yards and only managed to gain 167, a difference of more than half a mile.

But don't feel too bad for the Tigers. They were paid for being sparring partners with two heavyweight programs. A total of $860,000 to be exact. That's a nice haul for a modest athletic program's financial needs. 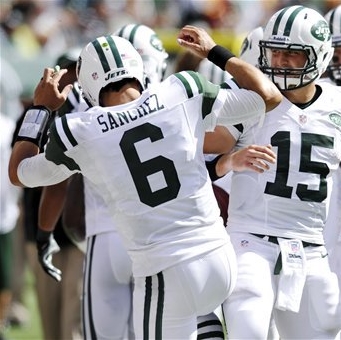 One of the big stories from Week 1 of the NFL is how Mark Sanchez and the Jets have "silenced" their critics. How after their offense struggled in the preseason they put up 48 points. How this team was a circus in Training Camp but seems to be a well-oiled machine now that the season has started.

Here's the real story from the Jets' 48-28 win over Buffalo: the Bills suck. They turned the ball over 3 times in the 1st half, then Ryan Fitzpatrick threw a pick 6 to start the 2nd half.

Everyone seems impressed with how well the Jets did, but since when are the Bills a measuring stick for the NFL? Especially a Bills team without Fred Jackson for most of the game.

Give credit to the Jets defense, and it's nice that Sanchez threw 3 TDs, but the 48 points on the scoreboard are deceptively complimentary to the Jets offense. 7 points were from a punt return. 7 were from an interception. In total, 24 were off turnovers.

So it was a good win for the Jets, but let's not get carried away. The Bills are a bad team. And they played horribly. The Jets did their job and took advantage of mistakes. But for some reason whenever that team, with that once anointed quarterback, and that jackass of a coach win a game against a bad team, suddenly there's a new force in the AFC East.

I don't think so. This team is as illegitimate as 8 of Antonio Cromartie's 12 children.

Photo Credit:
AP Photo/Bill Kostroun
Posted by rob at 10:30 AM No comments: 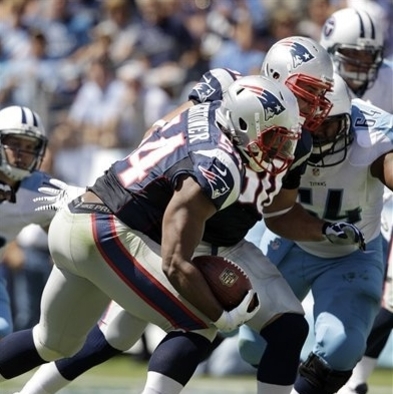 Yesterday our TVs were once again blessed with a sports team that tries, that cares, and that wins. It's been a long summer for sports fans in New England. Welcome back, Patriots.

Yesterday's 34-13 victory illustrated three major differences between the 2011 Patriots and the 2012 edition. We saw a wide receiver wearing #85 be a reliable target. We saw a defense capable of big plays and stops. And we saw an explosive running game.

Brandon Lloyd caught 5 passes for 69 yards. It took Chad Ochojohnson three games to catch 5 passes last year. Lloyd's 5 receptions are a third of what Ochojohnson had last year, and 69 yards is exactly 25% of Ochojonson's production in 2011 (276 yards). Lloyd made one mistake and it cost the Pats a touchdown, but his other catches demonstrated his skill as a receiver and his understanding of the Patriots' offense.

How many fantasy football people will be picking up the Patriots' DST this week? The Patriots had 2 sacks, an interception, and a forced fumble plus a recovery and touchdown. Chandler Jones and Dont'a Hightower are freaks. But they also stayed at home, did their job, and let the big plays come to them. The defense completely eliminated Tennessee's running game. Chris Johnson had 11 carries for 4 yards.

The Pats outrushed the Titans 162 to 20, and the main reason behind that was Stevan Ridley, who ran for 125 yards on 21 carries (6.0 yards per carry) and a touchdown. His first career 100 yard game. He was explosive once he got past the line of scrimmage. Five of his rushes were for 10+ yards, and four were 15+.

But there were some things that carried over from the previous season. Aaron Hernandez and Rob Gronkowski being brilliant, for example. Both caught 6 passes, both caught a touchdown, but both didn't execute their trademark celebrations from last year. Hernandez didn't make it rain and Gronk fumbled his mega-spike.

Another carryover was a shaky secondary. The Titans did the Pats a favor every time they ran the ball or threw dink and dump passes. The defense is still vulnerable to 8-15 yard curls and other basic mid-range routes.

Hopefully an improved pass rush can help deflect attacks on this weakness. And on offense, perhaps an improved running game can chew up clock and eat up yardage so opponents won't have enough time to exploit the secondary.

In any case, I'm just glad it's football season, the Pats are 1-0, and sports are once again fun to watch. The Cardinals come to Gillette Stadium next Sunday.

Photo Credit:
AP Photo/Wade Payne
Posted by rob at 10:00 AM No comments: