The Bruins won a record setting three Game 7s on their way to the Stanley Cup last year. So this is familiar territory for them.

The Bruins' best regular season players are finally showing up in the post-season. Seguin was a constant threat in Game 6, Krejci scored, Lucic had 2 assists. The Bruins need these guys to contribute, especially with Patrice Bergeron well below 100% and playing a very limited role.

The Power Play has been painful to watch, but I don't think it will be much of a factor in Game 7. I think the refs will only call the most blatant penalties and I'd be shocked if the B's get more than 2 Power Play chances.

Tim Thomas has been outstanding in this series. Some have pointed to a goal or two that he would have stopped last year. And many are declaring that Braden Holtby has "outplayed" Thomas. That's not true. Holtby has played well, but he's had much easier saves to make. The Capitals have constantly obstructed Thomas with bodies in the slot. Something the B's have only occasionally done to Holtby. Thomas has traffic, Holtby has space.

If not for Thomas, the Caps would have already won this series. And the bigger the stage, and the more pressure there is, the better Tim Thomas performs. The Bruins will not lose Game 7 because of their goaltender.

For the Capitals to win Game 7, there's a set order of things that they need to do. Holtby has to make some big glove saves, Ovechkin's line needs to score or at least neutralize a Bruins line, and goals need to be scored by one of 5 guys (Ovechkin, Semin, Laich, Brouwer, Backstrom). If any one of these things don't happen, the Capitals don't win.

All the Bruins can play defense as well. Peverly is the Bruins' top scorer in this series, and you'll see him on the ice in defensive situations. Unlike an Alexander Ovechkin. Then there's a guy like Chara who is the best defensive player on the team and also a guy who can score.

So Washington can win, but it'd have to follow a script. If the Bruins can disrupt that script, or just improvise their own using their broad range of skills, then they'll win.

I think the B's will find some holes in Holtby. I think Ovechkin will score and make things interesting. But the Bruins will pull away down the stretch and win 3-2.

There will be three Game 7s in the Eastern Conference. Thanks to what the Devils did last night.

This game probably shouldn't have even gone into overtime. The Panthers fell behind 2-0 in the 2nd. And despite only 3 shots on goal in that period, they were able to tie it. They took advantage of Martin Brodeur's age (not the first time Florida has taken advantage of old people) and scored some less than impressive goals. They only managed 16 shots in net for the whole game. Scott Clemmensen held his own but could only stop 39 of 42 shots.

Game 7 will be Thursday night in southern Florida.

Sox Get a Nice Relaxing Win 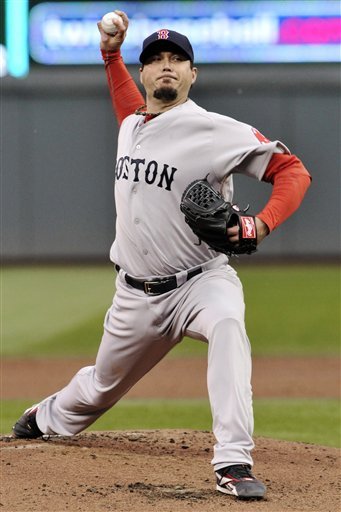 The day after Alfredo Aceves gave us all heart attacks and the day before the Bruins play in a Game 7, it was nice of the Sox to provide some low stress entertainment. The Sox scored early and often, Beckett pitched well enough, and the bullpen didn't blow an 8 run lead.

It was another demolition of an opposing pitcher. The Sox have scored 9+ runs five times already this season. They are very good at capitalizing on a struggling opponent. Three fourths of the total runs they've scored have come in those 5 games.

Thrashing the Twins isn't an amazing accomplishment, but you have to start somewhere. And the Sox need wins. Badly.

Ortiz hit his 3rd homer of the season, and knocked in 3 to retake the Red Sox RBI lead with 15. Cody Ross knocked in a run himself and now has 14. Aviles was 4 for 5, Youkilis had a nice 2 for 4, and even Marlon Byrd got in on the fun with a pair of singles.

Beckett was good enough. He gave up a lot of baserunners, but didn't let the Twins put up a crooked number. He got big outs when he needed them.

The Sox go for the sweep tonight as Clay Buchholz faces Australian Liam Hendriks, who is 0-0 but hasn't been bad in his two starts. Buchholz on the other hand... Well, he usually has a slow start to the season.