Just as a sidenote, some people in this country think that Europe is the epitome of civilization. Well, not all of it is. There have been stories out of Euro 2012 about monkey noises directed at a black Dutch player, some Russian fans were accused of racist chants during their match against the Czech Republic, and a 14 arrest brawl broke out hours before the Ireland/Croatia match (10 of the arrested were Polish, 3 were Irish, 1 was Croatian). So yeah, Europe is like here. There are jerks everywhere. Now to the matches...

Poland 1, Greece 1
Not a bad start for the host country. They'll take the 1 point. Greece was unable to convert a penalty kick against a Polish goalie who had just entered the game (he replaced the previous goalie, whose foul was the reason there was a penalty kick, for which he was also ejected).

Russia look like they have some very good form for this tournament. They could dominate Group A. 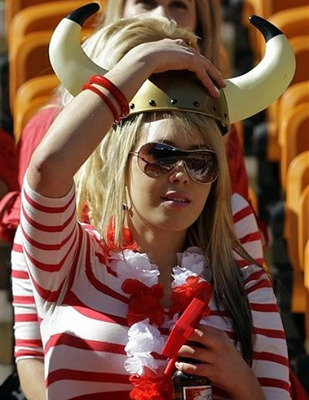 This is a stunning upset. I picked the Netherlands to win it all, and they lose to the Danish. The Dutch should settle into a groove, though, as all the top-flight teams seem to be a bit out of step at the start of the tournament.

The Germans dominated most of the play, but struggled to finish. It was the equivalent of an American football team not doing well in the Red Zone. Mario Gomez scored Germany's goal. I know that doesn't sound like a German name. His father was Spanish. He was born in Riedlingen, Germany. He scored a header when a ball glanced off a Portuguese elbow. That glance was Germany's best last-pass of the game.

Spain 1, Italy 1
A pair of giants met, and nothing was decided. Spain do look beatable, though. And that's new.

The Croats crushed any aspirations Ireland might have to advance to the next stage. And with Spain and Italy drawing, Croatia has an outside chance to advance themselves.

Today's games:
England vs. France in a rematch of about a dozen different wars. And Sweden vs. Ukraine in a battle over who gets to use blue and yellow as national colors. 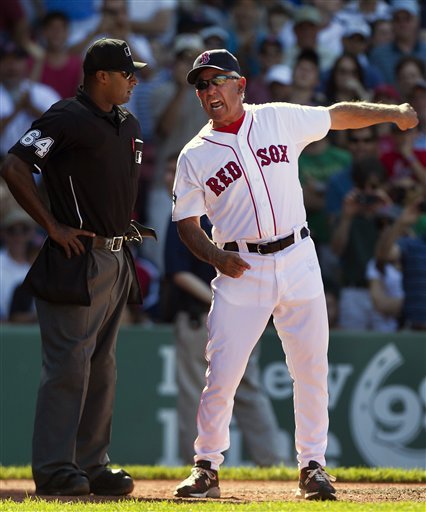 The good news is the Sox only have 9 more games against teams from the Maryland/DC part of the country (they're 3-9 against the Orioles and Nationals). The bad news is, the Sox are below .500 again, their offense has cooled off, their bullpen looks shaky, they can't seem to win at home (14-19 in Fenway), they're 6 games behind the Rays, 5 games out of the Wild Cards (with three teams to leapfrog over), and the Yankees are red hot.

At least the weather's been nice lately.

There is one other piece of good news, and that's the starting pitching. Jon Lester struck out 9 yesterday in a very typical Jon Lester start. He went 7 innings, allowed 3 runs, and gave the Sox a very good chance to win the game. If only they could get a hit with runners in scoring position. Which they didn't. The Sox were 0 for 8 with RISP.

David Ortiz provided the only real offense. He was 3 for 4 with a double and a homerun. The other 2 Sox runs came from groundouts. Dustin Pedroia grounded into a fielder's choice in the 3rd and Scott Podsednik had an RBI groundout in the 7th to tie the game at 3-3. Podsednik has been decent with the Sox, who lately seem to be able to find productive outfielders with their eyes closed. He's hitting .368.

Unfortunately, Alfredo Aceves blew another game. He gave up a 2 out RBI double to Roger Bernadina. Aceves went on a nice run in the middle of May, but since blowing a save against Tampa Bay on May 27th, he's 0-3, and has allowed 7 runs in 9 innings. He does not appear to be a steady, reliable Major League closer.

Jonathan Papelbon has converted 16 of 16 save opportunities and has a 2.22 ERA.

When David Ortiz called a player's meeting a month ago, part of what was discussed was that the starting pitchers need to pull their weight. They've been doing that. Lester was good yesterday. Daisuke wasn't bad (especially for a rehab start) on Saturday. Buchholz was brilliant last Thursday. Beckett was great last Wednesday. The Sox only won 1 of these games.

Now it's the lineup's turn to pull some weight. Ortiz can't do it all. Pedroia is in a 3 for 24 (.125) slump since returning from his thumb injury. Adrian Gonzalez is slugging .419, about .100 lower than he should be expected to slug. Kevin Youkilis did well when he first returned from the DL, now he's in a 4 for 25 (.160) drought. Will Middlebrooks hasn't had an extra-base hit since May.

Hopefully a trip to Miami can help turn things around. The Marlins are in 4th place, and Beckett is on the mound for the Sox tonight. He might need to hit a few homeruns on his own to give himself a reasonable amount of run support. He faces 3-4 Josh Johnson. Adrian Gonzalez is 4 for 11 in his career against Johnson, so maybe he'll get a few hits tonight.

A Sad End to a Happy Era for the Celtics 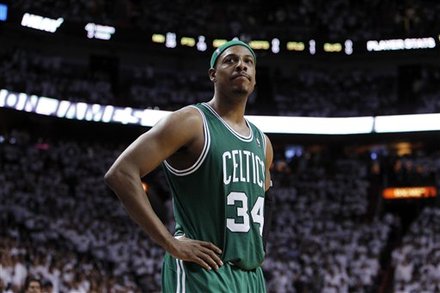 In what could be the last game of the Big Three Era in Boston, the Celtics fell to the Heat 101-88. It was likely the last time that Paul Pierce, Kevin Garnett, and Ray Allen were all on the same floor on the same team in a meaningful game.

It was a brutally painful end to an enjoyable 5 seasons. So even though the ending wasn't a triumphant one, and there was no ride into the sunset with an 18th NBA Championship trophy in tow, I'd argue that as a whole the story of The Big Three was happy one.

In the Big Three Era, the Celtics won 5 divisional titles, 2 Eastern Conference titles, and an NBA Championship. They won 11 playoff series (they'd won 10 between the 1986 NBA Finals and the start of the Big Three Era). They had a .693 winning percentage and won 273 regular season games. They rekindled the rivalry with LA. They won rings for Kevin Garnett and Ray Allen. And they made sure that the number 34 would one day hang in the rafters of the Garden with the other Celtic greats.

It's been a very special 5 years.

The Celtics and Heat were tied 73-73 going into the 4th. The Celtics led 82-81 with 8:00 left in the 4th. Then the Heat went on a rampage and the C's cooled off. They outscored the Celtics 20-6 from that point on. The Heat executed, the Celtics didn't.

The common explanation for this is that the Celtics "had nothing left in the tank." They simply ran out of gas. That may be. And it might be part of the reason Miami was able to pull away so quickly. I'm not quite sure that's the reason, though.

This Celtics team has been very streaky all season, especially with their shooting. Hot for 10 minutes, cold for 10 minutes. They've blown several leads (and built several leads) in the postseason because of this streakiness. They were cold at the end of the 4th last night, but it didn't look much different from previous cold stretches.

And give credit to the Heat for their execution. I hate that I have to do that, but they made the big shots in the 4th last night. They made the momentum swinging plays (example: late in the 2nd Celtics had a chance to go up by 9, Pietrus turned it over, then LeBron dunked to make it a 5 point game). They played better than the Celtics, especially in the clutch.

I'm not calling the Celtics a team of chokers. You can't be both a Choker and a Champion, and you can't be a Choker if you're also the underdog. But the Celtics could have won this series if they played just a little bit better. The effort was there, but not the execution.

Earlier in the series, the Celtics got cold at a key time and let another game get away from them. Game 2, remembered mostly for bad officiating, saw the Celtics up 5 points with 3:00 left in the 4th. And they couldn't hit a shot. Miami took a lead, then the Celtics had to miraculously tie it, hope for LeBron to choke (which he did), and go to OT. Which they eventually lost, thanks in part to the refs. But the C's had that game in their hands, and didn't execute.

And that's fine. The Bruins didn't execute against the Caps. The Patriots didn't execute against the Giants. It happens. I'm not trying to lead an anti-Celtic crusade here. I'm not trying to criticize them or call them losers. It just seems like every time the Celtics lose, there's always an explanation and it never includes the phrase "didn't play well enough to win." It's either the refs, or their age, or health, or injuries, or running out of gas.

It's okay to admit that these guys are human, and that it's tough to execute perfectly for 16 games and win an NBA Championship. If anything, I think it emphasizes how impressive their 2008 title was. The NBA Playoffs are a grind. Only a freak could play their absolute best in every single game.

Anyway, in 10 years we won't remember this game much. We'll remember the players, but not for their shooting percentages in the 4th quarter of this game. We'll remember them for what they did the 5 years they were here. They brought pride back to the Green and White, to the most storied franchise in the NBA, and to Boston.