Red Sox Give Crybaby David Ortiz $16 Million to Shut Up 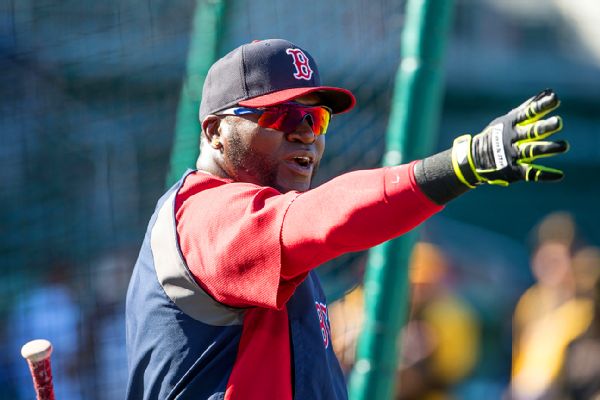 I love David Ortiz as a player. However at times, many many times, he acts like a spoiled whiny cry baby. And once again that baby got his bottle. The Red Sox agreed to a one-year extension of his contract, which will pay the designated hitter $16 million in 2015 when he's 39 years old. The contract will extend to 2016 if he reaches a certain number of plate appearances (425 for an $11 million deal, 600 for $16 million).

There was no on-the-field, baseball reason for the Red Sox to sign him to this extension. This was to silence a crying baby. Which makes me happy. I just want Ortiz to shut up. Stop worrying about your contract, about the official scorer giving you RBIs, about every sportswriter who criticizes you. Just shut up and play baseball. This contract shuts him up. The baby is silent.

Bruins Win 12 in a Row Thanks to Number 12, Jarome Iginla

In the middle of the biggest basketball weekend of the year, your Boston Bruins were the 5th story on SportsCenter Sunday morning. That's because they won their 12th straight Saturday night, coming from behind in the 3rd period to beat the Phoenix Coyotes 4-2.

The streak is the longest in franchise history since the 1970-71 season when the B's won 13 in a row. The franchise record is 14 straight from the 1929-30 season. Also over the weekend, the Bruins clinched a playoff berth. That's 7 consecutive years of playoff hockey in Boston.

I came up with a theory to explain this winning streak. Maybe when the Bruins didn't do much at the NHL trade deadline, the team felt that management had confidence in them. Maybe this motivated the players. Maybe it lit a spark, sparked a fire, fired them up. Name your cliche.

That'd be a nice story, but I think this streak is a result of mathematics, not psychology.

That's Krejci (3 goals) plus Iginla (11 goals) plus Lucic (3 goals) equals 17 goals. That's how many the top line have scored in the past 12 games. Iginla scored twice in the win over Phoenix.

I'm going to start calling this line The Killers, because their initials are KIL. Think it will catch on?

The story of the streak has been offense: the first line has scored 17 goals, Patrice Bergeron has scored 5, Carl Soderberg 4, Gregory Campbell 3, Zdeno Chara and Dougie Hamilton each have 6 assists in the streak. The offense is coming from all 4 lines and from all the defensemen, including the newly acquired Andrej Meszaros, who has a goal and 3 assists in his 7 games with the Bruins.

And while the team's been scoring, they haven't allowed their opponents to come from behind. Mainly due to this next equation:

The Bruins have killed 31 of 34 penalties during this stretch. Earlier this month the Bruins killed 5 penalties against Phoenix and won 2-1. The B's killed 4 against Florida on March 9th and won 5-2. They haven't allowed their opponents to get back into games with power play goals.

Hopefully the B's have finally figured out how to kill penalties without Dennis Seidenberg.

The Bruins hope to extend their streak with a win over Montreal tonight at the Garden.

The Bruins currently stand with 103 points, tied with the St. Louis Blues for the best record in the NHL. They're also 6 points ahead of Pittsburgh in the East and 17 ahead of Tampa Bay in the Atlantic. That's a 17 point lead with 11 games left. The Bruins are 6 points away from clinching the division and could claim that title as early as Thursday.

Photo Credit:
Ross D. Franklin/Associated Press
Posted by rob at 10:00 AM No comments: