It's finally been decided. As compensation for Theo Epstein, the Red Sox will receive 26 year old right-handed reliever Chris Carpenter.

It's an underwhelming acquisition. Many Sox fans, and the Red Sox themselves, thought they'd be getting something exciting. Maybe a top 5 prospect, or maybe the Cubs would assume the salaries of an overpaid player. This optimism was quite stupid. Wishful thinking.

The fact is, the Sox are fortunate to receive any compensation at all. Theo didn't want to be here. While he was still under contract, when players want to leave their teams they're often traded. And traded for less than they'd normally be worth.

Essentially, the Cubs are paying the Red Sox for something they already have and have already used. It's like stealing a car then sending the former owner a $10 gift card to Arby's. It's not going to satisfy car's former owner. Then again, the thief already has the car. The Cubs already have Theo. Possession is 9/10 of the law. Let's go to Arby's.

Carpenter is approaching the stage of his career when he's no longer considered a prospect. He's 26 and has yet to find a role for himself as a Major League player. Last year he was converted to a reliever after struggling as a starter in AAA.

He doesn't throw strikes. And that's a major problem. In 25 games in AAA, his WHIP is 1.83. He's walked 32 batters in 45 innings. And MLB batters are much better at drawing walks than AAA batters. So he walks 3 guys every 4 innings, gives up close to 2 baserunners per inning, and he's thrown 7 wild pitches in AAA. That's once every 6 innings.

He's just not that good.

And the lameness of the Red Sox off-season lingers on.
Posted by rob at 3:00 PM No comments:

Boston is a pro sports town. We do have Boston College, who typically field competitive football and basketball teams, but never attain any national glory. But BC also has one of the best hockey coaches in history: Jerry York. On Friday night Jerry York's BC Eagles defeated Merrimack College 4-2, giving York 900 wins as a head coach. BC beat Merrimack again Saturday night for win #901.

York was born in Watertown. He attended BC from 1963 to 1967, playing center on the hockey team. By 1972, he was the head coach at Clarkson in the North Country of New York state. York then coached at Bowling Green in Ohio, winning an NCAA Championship in 1984. In 1994 he returned to BC and revitalized the program. He's won 3 NCAA titles with BC, 5 regular season Hockey East titles, 8 Hockey East tournament titles, and 6 Beanpots.

He's 66 years old, he's one of the nicest guys you'll ever meet, and his Eagles are currently ranked #2 in the country, looking to add more hardware to York's already stuffed trophy case.

BU's Jack Parker has 868 wins as a coach. Here in Boston we have two of the best hockey coaches ever.

On Sunday, BC basketball hosted Duke. York was in attendance, and met with Duke's Coach K. I'm not a Duke fan, but I think this is a pretty cool picture of two coaching legends, each with 4 NCAA titles, each with 900+ wins The Oakland Athletics have signed career controversy maker Manny Ramirez to a 1 year deal worth $500,000. The steroid assisted slugger will have to sit out 50 games before he can play, but I think this is a good signing for all parties involved. The Athletics risk almost nothing to acquire a player with 555 homeruns under his belt. He'll be able to play for over 100 games and if he doesn't work out, then little is lost. And for Manny, he gets an opportunity to earn a larger contract in 2013.

The Athletics' 51st game will be May 30th in Minnesota. The A's host the Red Sox for 3 games starting July 2nd. Sadly, the Athletics will make their only trip to Fenway Park well before Manny's suspension.

Hopefully one of those games gets rained out and a makeup game can be played in August or something.
Posted by rob at 11:00 AM No comments: 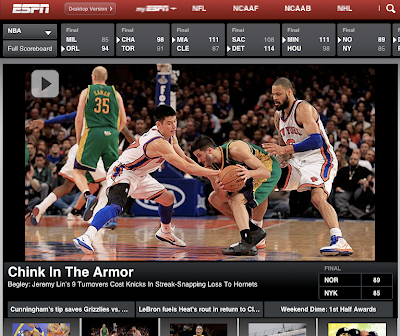 The English language is a fun and funny thing. There are so many words and phrases that have multiple meanings. Homonyms, homophones, double entendre, et cetera. But ESPN crossed the line with their racist headline.

People should be fired. If it's an "honest mistake," then the writer of the headline has demonstrated a fundamental failure to grasp the English language. If you don't know that this word is a racial slur for Asians, then you shouldn't be in the writing profession.

The word "chink" is only used for two reasons. The first is as part of the expression "chink in the armor," which is rarely used. The second, and much more prominent usage of the word is as a derogatory slur. This cannot be excused as an accident or a mistake. This was intentional.

This person at ESPN gets paid for their proficiency with words. They get paid to fill the site with words. And if they don't know this basic racial slur then they must not be very proficient with words. In which case, they shouldn't be in the Word Business.

The writer should be fired for either their failure to grasp basic English, or their willingness to use racial slurs. Moreover, the editors should also get the boot for allowing such a headline to appear on the site. And even the lowly web designers who write the codes for the site should be scrutinized. How come nobody at ESPN said "hold on a minute?" That graphic was a relatively innocent thing. Utterly innocuous. But ESPN's headline is not innocent. At the very best, it's an example of extreme ignorance of the English language, which is inexcusable for a professional writer. And more likely, it's some jerk who thought they were being clever as they incorporated a racial slur into their headline. In either case, it's wrong, and people need to be fired over it.
Posted by rob at 10:00 AM No comments: