I think the NCAA got their punishment of Penn State almost perfectly right. They didn't destroy the program, they crippled it and forced it to rebuild itself.

The punishment included a $60 million fine, a 4 year post-season ban, and a reduction of football scholarships. The result of these measures will be the subjugation of the Nittany Lions to a second-tier team. The NCAA will also erase all of Penn State's wins from 1998 onward.

The fine confused me at first. How can you put a price-tag on rape? Then I learned that the $60 million will be going to an endowment for sexual abuse charities. And suddenly it seems like an appropriate amount. It's large, but the University will survive paying it. The NCAA says the amount is equivalent to a year's revenue for the football team.

The post-season ban is very significant. And the Big Ten declared that Penn State won't be eligible for the Big Ten Championship game either. Bowl games are showcases for football programs. And they're cash cows for the conferences. The Big Ten has announced that it will not share its bowl revenues with Penn State, and will instead give that money to charities. That was a very wise decision by the Big Ten.

For 4 years, Penn State will have no hope of a national title, a conference title, or even a bowl game title. That will hurt their wallets and also their recruiting.

That's a significant blow to recruiting. It means that Penn State will have 20 fewer scholarship athletes than its opponents. And that its recruiting classes will be 40% smaller than their competitors'.

Then there's the indirect punishment of players leaving the team, hoping to play for a program that can make a bowl game, and has more scholarship players and therefore a better chance of winning. Two recruits have already de-committed after these punishments were handed down.

In its punishment, the NCAA allows any football player to transfer without having to sit out a season.

The scholarship reductions will last 4 years.

The length of the punishments ensures that Penn State will struggle for a considerable amount of time. Any freshman player today will know that they'll spend their entire college career on an inferior team that has no hope of post-season play.

These penalties cripple the program and force it to limp along for 4 years, then possibly be rebuilt.

And that's exactly what this football program deserves to do. It deserves to struggle. If new people can rebuild it after struggling, then so be it. To me, Joe Paterno and all the other PSU scumbags who let Sandusky prey on innocent flesh are responsible for crippling the program they held so high. That's justice. They did what they did for the sake of the program. And now their actions and inactions have seriously damaged that beloved program.

I don't agree with the wins being vacated. The NCAA wiped out all Penn State victories from 1998 onward, when the cover-up began. Would they have erased the wins if Paterno didn't have the record for victories?

To me, Paterno's legacy is already a tarnished and tattered ruin. Even if he still had the record for wins, he wouldn't be remembered for that.

And you can't change the past. Penn State won those games and everyone still knows it. Even though Pete Rose can't be inducted into the Hall of Fame, he still has the record for hits.

The NCAA doesn't want Paterno to have the wins record, but he does. If you erase that from the record books, then the record books don't hold the actual records anymore, do they?

Some have argued that the NCAA shouldn't punish Penn State for their off-field sins. I disagree. The program and the school allowed this all to happen. The cover-up was part of the Penn State football program. So therefore the program is eligible to be punished for the cover-up.

The program became more powerful than the school. And as an institution, the program was corrupt. The program should be held accountable for its corruption.

Some have argued that the punishments don't go far enough. Unfortunately, there is no punishment, no matter how severe, that will unrape young boys. And I think that the Penn State football program, under new leadership and administration of course, has the right to rebuild itself and to be something different.

Would eliminating the program entirely accomplish anything positive?

The people who want to eliminate football at Penn State are seeking quick and decisive vengeance. And that's not what punishments are for.

It was the schools' lack of control that allowed Joe Paterno to become a campus dictator.
Posted by rob at 12:00 PM No comments:

Whoever did this should win the Academy Award for Best Film Editing. How long did it take to edit this together? I'd say there are over 400 cuts, and each one is precisely perfect. The maker of this had to find all these clips from 6 very long films. And that includes enduring 2 movies with Hayden Christensen in them.

Terror in a Texas Ballpark 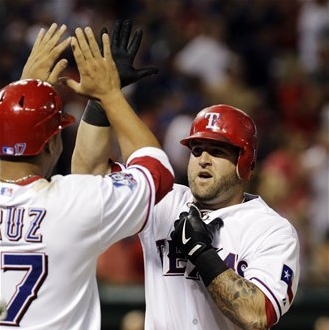 When Larry Luchhino or Ben Cherington need to make a major decision, they have to call Mike Napoli and get approval. Because he owns the Red Sox. He has a higher career slugging percentage against the Red Sox than any other player. Ever. He slugs .725 against the Sox. Nelson Cruz slugged .710, Babe Ruth slugged .683, Frank Robinson .652, and Lou Gehrig .644.

Last night he hit a 2 run homerun, part of a 9 run Ranger onslaught. And the Red Sox fell below .500 for the first time since June 16th.

Giving up 9 runs to the Rangers is bad, but it's not as depressing as the Red Sox offense was. They were 0 for 7 with runners in scoring position. Crawford didn't get on base, striking out twice. Pedroia got 3 hits, but Adrian Gonzalez got 0 hitting behind him. Ryan Sweeney, the 8th hitter in the lineup, had the best offensive chances. That's not how it's supposed to work.

I don't like Carl Crawford hitting 2nd. I know he's fast. And that's great. But how often will you try stealing bases when your best hitters are coming up? And if those hitters are power hitters, why risk stealing 2nd when you're still able to score from 1st on a double? And anyway, the #2 hitter's main purpose is to get on base. Which Crawford hasn't been great at in his career. His .333 career OBP doesn't justify his hitting in either of the top 2 spots of the lineup.

Hitting Crawford 2nd pushes everyone back a spot, which also reduces their at-bats. He also strikes out far too often for a top of the lineup kind of guy who doesn't hit for much power.

Dustin Pedroia was designed to be a #2 hitter. He's not an easy out, he's not going to clog the bases, he's a smart hitter, a smart baserunner, his career OBP is .368.

Then when Ortiz returns: Ellsbury, Pedroia, Ortiz, Gonzalez, Ross, Saltalamacchia, Middlebrooks, Crawford, Aviles. Now that's a lineup. Ellsbury and Pedroia get on base. You have multiple power guys in the middle who can knock runs in. Then some decent power after that to mop up, and a solid back of the lineup that can generate runs and give Ellsbury and Pedroia some RBI opportunities.

Having Crawford bat 2nd means the lineup relies too heavily on a player who never was great at getting on base. And this is also a guy who hasn't yet proven he is nearly as good as he was back in 2010.

Fixing this team's pitching is a simple plan, but it's not easy to execute. Josh Beckett and Jon Lester need to pitch better. Easy to say, but will it actually happen? Beckett might go on one of his runs of excellence. He might not. Flip a coin.

But Jon Lester is staring into the abyss right now. His next start could be a turning point in his career, one way or the other.

Beckett and Lester need to do their jobs. Felix Doubront is simply not capable of carrying the load that these guys are supposed to assume responsibility for. Doubront has done well, but he's no Josh Beckett or Jon Lester.

Thankfully, Clay Buchholz is on the mound tonight. The Sox could use another great start from him. He faces 21 year old Martin Perez. Perez has made two Major League starts this year, one was decent, one was horrible. However, he's also a lefty, and the Sox have no experience against him. So Buchholz might need to be brilliant in order for this losing streak to be stopped.