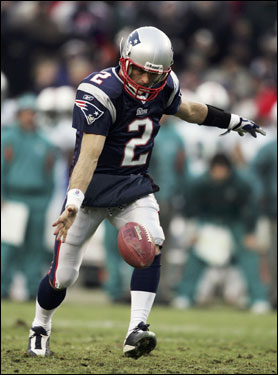 Tedy Bruschi also got an award. He was awarded the Ed Block Courage Award for the Patriots. Each NFL team has a recipient and Tedy is the Pats'. There will be a ceremony for the recipients in February.

Bad news on the Tejada front. The Red Sox and Orioles reportedly exchanged offers but the Orioles didn't like the deal. They want more. I don't know how much more the Red Sox could offer. They're willing to give up their best hitter, a solid pitcher, and cash. I have a really bad feeling that the Sox might overpay for Tejada just to make a splash and make a positive move so the fans are satisfied for a bit.

The buzz in baseball is that the Red Sox are trying to get Miguel Tejada. Still. For about the fifth straight week. The deal currently being discussed seems to be Manny Ramirez and Matt Clement for Miguel Tejada and a prospect, said to be outfielder Nick Markakis.

The deal will supposedly be done soon if it is done at all. I'm pretty excited at the possibility of Miguel Tejada wearing a Red Sox uniform, but would it really improve our team to the point where we'd be a 95-100 win team. By the way, we're probably going to need 100 wins to claim the division, maybe even to claim 2nd place.

Tejada would probably replace Ramirez in the batting order. What could we expect from Tejada offensively?

Last year, Miguel Tejada batted .304. Manny Ramirez batted .292. That's about one additional hit per 100 at-bats, or around once every 27 games in a 600 AB season. Tejada's .304 was higher than his .280 career average while Ramirez's .292 was lwoer than his .292 average. In fact, 2005 was the first season Manny had an average below .300 since he became a regular player with the Indians. Batting average wise, they will probably be the same, hovering around .300 or so.

Tejada might see his average go up if he came to the Red Sox. He does hit well in Fenway. Last year against the Red Sox, he hit .306 against us while playing in Camden Yards. He hit .439 against us in Fenway. He slugged .805 in Fenway, hitting 7 doubles, a triple, and two homeruns. He knocked in 7 in 9 games and 41 at-bats in Fenway. However, he did strike out more frequently in Fenway.

Now, keep in mind that Manny would be hitting without Johnny Damon batting leadoff. Manny has had a good leadoff man almost his entire career in Kenny Lofton with Cleveland, and Damon here in Boston. Damon didn't start hitting very well until 2004. In 2003, Damon hit .273 and Manny had 104 RBI. In 2004, Damon hit .304 and Manny knocked in 130. Last year, Damon batted .316 and Manny knocked in 144. So how would Manny do without Damon or any "traditional" leadoff hitter in front of him?

There are, of course, many more things to baseball than numbers. It is obvious that Manny is at elast a small distraction to the Red Sox clubhouse. They can dismiss it as "Manny being Manny." However, it must be distracting to not know if your teammate will screw up or not put forth a full effort. If we don't trade Manny, he could shut down. I know he has wanted to be traded in the past and has still performed, but that always seemed to be because he decided he wanted to stay. Until he makes that decision, he asks to be benched, or he doesn't give it his all if he does play. What if he doesn't decide he wants to stay until May or June? We could be out of the playoff race by then.

Tejada wants out of Baltimore. He wants to play for a competetive team like Boston. He wants to play for a team that will spend money to win, not to bring in big name players like Sammy Sosa and Rafael Palmeiro. He is probably fed up with the rivers of scum that flow in and around Camden Yards. I'm not talking about the fans, I'm tlaking about that organization's proficiency for acquiring some of the lowest calibre of people to play for them (Sosa, Palmeiro, Ponson, Bedard [don't ask]). I think if Tejada came here, he would play hard, and be a leader. Francona probably won't let him, but Tejada would want to play every single game, which he has for 5 straight years. In the same stretch, Manny has missed 90 games (18 per season) due to various "injuries" and "illnesses."

I think Tejada would be an improvement for the Red Sox. We'd probably get similar production numbers and we would get them from a player who is more consistent and, at least until WEEI drives him out, wants to be here. (sarcasm). The loss of Clement in the deal would not really kill us, especially if we get another pitcher via free agency and/or if we keep Arroyo. Plus, we could get a nice prospect out of it (Markakis batted .339 in AA last season, is rated by Baseball-America as Baltimore's top prospect, and went 3/11 in spring training last season). Markakis probably wouldn't be able to step up and immediately play in the outfield, but he would probably be ready to do so by 2007.

So the deal is good. But it isn't monumentally great. It makes us better, but it doesn't even begin to solve all of our problems. We would still need another solid pitcher, in my opinion, because Schilling, Papelbon, Beckett, Wakefield, and Arroyo all have question marks flying around them, as does Keith Foulke and the soon-to-be worn out.

If we do trade Manny, then we'll have TWO holes in the outfield which will put us in an even weaker position to bargain with other teams for a left-fielder and a center-fielder. We couldv'e gotten Lofton for $4M, but we seriously though Damon would sign a 4 year, $40 deal.

In summary, I'd like to make a deal for Tejada, but I wouldn't burst out of my house and start dancing in the sreets if we got him. We'd still need to make a few more moves to be competetive in the much tougher AL East.
Posted by rob at 7:14 AM No comments: