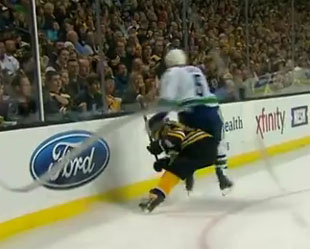 After lengthy deliberation, the NHL suspended Marchand for 5 games. They deemed his clipping check of Sami Salo to be "predatory." No doubt Marchand's history and reputation played a part in the NHL's decision, rightfully so. Brendan Shanahan explains.

I wish the NFL would do stuff like this, clearly explaining and showing with video why they've decided to discipline a player.

Anyway, the simple fact is, Marchand ducked too low. If that was intentional or incidental, only Marchand knows. He should also know better. He can duck this check by dropping his shoulder into Salo's hip. He has a reputation and a history, particularly with this team. While we adore him for moments like this one:

That style of behavior tends to draw the attention of the League offices.

And before anyone accuses the NHL of an anti-Boston bias, or of trying too hard to eliminate physicality in the game, let's remember that Chara didn't get disciplined at all for his hit on Max Pacioretty. And more recently, Lucic's game misconduct from Saturday was rescinded.

I do think that calling this hit "predatory" is a bit much. It'll satisfy the whining from Vancouver's players, press, and coaches. In effect, this suspension is a warning to Marchand. One he must heed. I love his style of play, I love how he gets under the skin of opponents, but he has to learn where the boundaries are. He crossed a boundary on Saturday. And now he has some time to think about it.

Of course, to any high and mighty Canucks fans, I wouldn't get too morally superior.