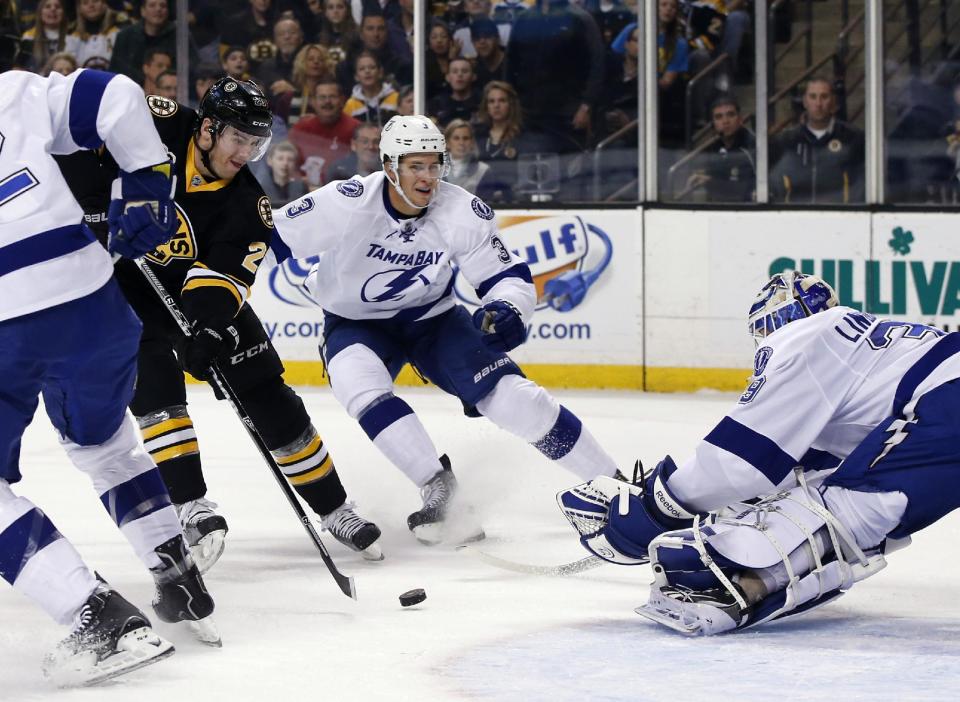 The Tampa Bay Lightning sit ahead of the Bruins in the standings of whatever division the Bruins are now in. The Atlantic division, I think. However, the B's have now beaten the Lightning three times.

And that's thanks mostly to Tuukka Rask. He stopped all 28 Tampa Bay shots in this one. He's stopped 84 of 85 shots against the Lightning this year. That's a 0.988 SV%. His most impressive save on Monday was a right-pad stop of what would have been a Steven Stamkos goal.

Stamkos would leave the game with a broken right tibia suffered while charging the net and striking the post. He's one of the premier players in the League, his stardom somewhat wasted in a hockey apathetic market, so hopefully he comes back soon and comes back well.

The Lightning might have been able to steal this game with a couple of power play goals. Thankfully the Bruins' penalty-kill is as good as ever. The B's killed 4 Lightning power plays, and have gone 6 straight games without allowing a power play goal. They've amassed 22 consecutive kills.

Bergeron has been scoring this year and scored a goal in this game goal in this game, defensemen have been contributing on offense (Krug and Bartkowski with assists), and the newcomers are doing well. Jarome Iginla scored his 4th, and now has 11 points. And Loui Eriksson doesn't seem to be suffering any adverse effects from the concussion.

So a good win for the Bruins, a good divisional win against a quality opponent. The Bruins are 8-1-0 within their division. And that's very good.

The Bruins host Columbus on Thursday.

The Tom Brady-Peyton Manning Era Is Nearing an End

I'm not saying the Brady-Manning era is over. It clearly is not since the two future Hall of Famers have the second and third best records in the AFC. Nor am I suggesting that Brady and Manning are the only elite QBs in the League. But for over a decade they have been at the center of AFC football, winning 4 Championships, representing the AFC in 7 Super Bowls, and claiming 6 MVP awards.

But Manning is 37. Brady's 36. How much longer can these guys continue to be so prominent in the game?

Manning's been sacked 265 times in his career. Brady 329. That doesn't include all the hits after they've released the ball, all the times they've been blocked hard during an interception or fumble return.

Manning is having an excellent year in Denver. Brady's 2013 season hasn't been nearly as impressive, but the team is 7-2 and there have been glimpses of greatness. Last week's win over Pittsburgh was vintage Brady. And his game-winning TD pass against the Saints was sheer brilliance.

If the season ended today, the Patriots and Broncos would be the 2 and 3 seeds in the AFC playoffs, respectively. The Broncos have the 2nd best record in the Conference and the Patriots the 3rd best. Peyton is putting up absurd numbers out in Denver. Brady has struggled, but once again has the support of a strong defense, which makes the Patriots a dangerous team in the playoffs.

The Broncos face the Pats on November 24th in Foxborough.

So enjoy this rivalry while it lasts. This might be one of the final years that both these guys can play at the top of their game, competing for Super Bowls and MVPs.
Posted by rob at 12:00 PM No comments: 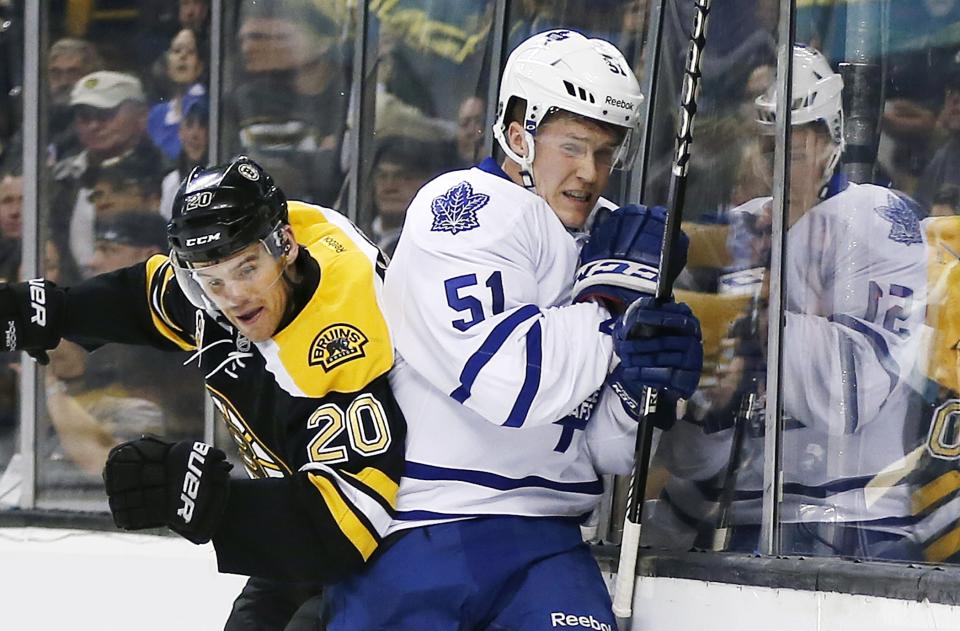 NESN's Dale Arnold described Saturday night's meeting between the Boston Bruins and the Toronto Maple Leafs as "Game 8" of the series that ended last spring in dramatic fashion. Gloriously dramatic for the Bruins, and painfully dramatic for the Leafs.

In many ways, this was indeed a continuation of the series between these teams. That's what makes these rivalries so interesting. There's history. There are good and bad memories, grudges, a hopeless desire for revenge, a greedy desire to continue to beat your opponent.

I must admit that until this game, I hadn't been very interested in Bruins hockey. You go from the Stanley Cup Finals to regular season game #1 of 82. You also have a Red Sox playoff run drawing all attention to it. It took an Original 6 rivalry to ignite my interest in the 2013-14 Bruins.

Because I hate the Leafs. I hate Phil Kessel. I hate van Riemsdyk and I don't know why and that makes me hate him more. I hate Toronto fans. And I hate their city and their crack smoking mayor.

So I was very pleased to see the Bruins score a pair of power play goals. Which is not common for them to do. I was thrilled to see Patrice Bergeron score yet another game-winning goal against Toronto. I was happy to see Loui Eriksson get back into his groove. And I was ecstatic to see Jarome Iginla playing physical, Bruins style hockey. I think it suits him. He's winning me over.

And now I'm hooked. For the next 5-7 months. It's hockey season.

Bruins host the Lightning Monday afternoon, another rematch of a memorable playoff series.