If you think Chara deserved a suspension, fine. I'll disagree with you, but I can at least understand your viewpoint. If you think he deserved to be arrested, you're an utter moron. And Canada manufactures morons like the US makes guns.

And now Air Canada has threatened to revoke its sponsorship of the NHL after Chara went unpunished.

Canadians have this weird inferiority complex, coupled with a sense of moral superiority over Americans. It all goes back to the Battle of Quebec in 1775. It's history. It's a fact.

I know Canadians love their hockey, and that's great. I've lobbied for the NHL to relocate teams to Quebec, Winnipeg, and Hamilton. But come on. Is this going to turn into an international incident, with ambassadors and diplomats getting involved? Is the Slovakian consulate in Montreal going to get attacked with Molotov Molsons? 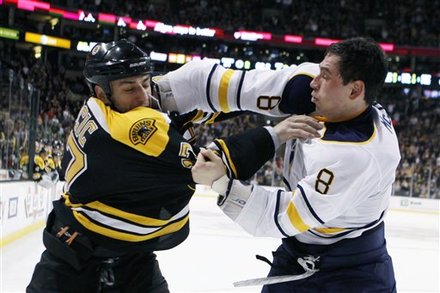 I rarely blame officiating for losses. And certainly the Bruins might have found a way to win this one despite the referees. But it's difficult to beat a good team like Buffalo, when you're shorthanded for an entire period.

The Sabres had 7 power plays, including a pair of lengthy 5-on-3s. And the calls still make me facepalm. Zdeno got 2 minutes for being stronger than Steve Montador. The refs laughably called it boarding, even though it was a good 15 feet from the boards. How does that work? Seidenberg got 2 minutes for playing like a defenseman in the crease. Meanwhile, the Sabres figured out what was up, and proceeded to go down whenever a Bruin stick was near their feet.

The Bruins certainly could have played better. Their breakout was inconsistent. When they made smart moves through the neutral zone, they scored goals, or at least got a shot on net. They only got 7 shots on net in the 3rd period. With all the bad calls, it's easy to forget that the offense was truly inconsistent.

Part of that inconsistency was due to Ryan Miller. Both he and Thomas put on a clinic. The fights ad refereeing overshadowed it, but both were superb. Ryan Miller just doesn't allow goals on the first shot. It has to be off rebounds.

I'm usually angry when the Bruins blow 2-0 leads. But what can you do against goalies like Ryan Miller, and referees like that. Hopefully, this isn't the start of a trend in officiating. Bruins @ Islanders tonight.