The 26th Hockey East Championship will be decided in the next two weeks. UNH won the regular season title (their 8th), and BC came a very close 2nd, only 1 point behind. Both UNH and BC will likely be in the NCAA Tournament. But there are several bubble teams that need strong showings in order to make that 16 team field. The opening round is played at the campus of the better seed. It's also a best of 3 series. The semifinals and finals will be held at the TD Garden next weekend, and those rounds are 1 and done.

Vermont Catamounts @ New Hampshire Wildcats
UNH won the regular season title, but ended the season with a tight loss at BC. In fact, they never beat BC, tying them twice in their remaining meetings. They also didn't dominate Vermont, going 1-0-2 against the Catamounts. UVM is 17th in the PairWise Ranings, which is an unassailable indicator of a team's chances of making the NCAA tournament. In other words, they need to beat UNH in this round. And I think they will put up a good fight, but lose in 3 games.

Massachusetts Minutemen @ Boston College Eagles
BC needed overtime to beat UMass a few weeks ago. The Minutemen's size posed some problems to BC's small but speedy forwards. But in a 2 to 3 game series, BC's depth will wear down a team like UMass. BC wins this series in 2 games.

Merrimack College Warriors @ Boston University Terriers
BU has surged in the 2nd half of the season. After starting off 2-9-3, the Terriers have gone 12-5-0, earned 3rd place in Hockey East, and now have an outside shot at an NCAA bid. Albeit a VERY outside shot. They need to make the HE Tourney finals, at least. Merrimack's been a nice surprise, but when BU is motivated, they're always a hard team to beat. BU sweeps in 2 games.

Massachusetts-Lowell River Hawks @ Maine Black Bears
These teams were tied in points, Maine won the tie-breaker, and so gets home ice advantage. Maine's been a bipolar team, sometimes beating UNH twice in a weekend, sometimes losing to Vermont twice in a weekend. They took 2 of 3 from UMass-Lowell. Big things were expected from the River Hawks this year, so while normally 5th place is a good year for them, they've got to be a little disappointed. UMass-Lowell has struggled on the road, as has Maine. Since the games will be in Orono, I'm giving the edge to the Black Bears in 3.

EVEN COOKE'S TEAMMATE THINKS HE SHOULD BE SUSPENDED 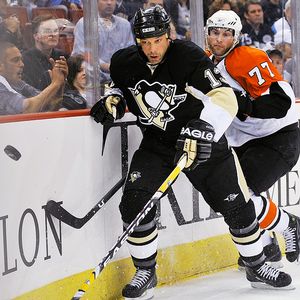 How can you not love Billy Guerin, a.k.a. the Pride of Wilbraham?

"If a guy gets hurt like that with a shot to the head, there's got to be something. Actions happen. Guys don't mean to hurt each other, but they do. You got to pay a price for that... We're all under the same umbrella, whether the guy's on my team and I'm sitting right next to him or he's playing in California. It doesn't matter. We're all playing in the same league. We all want the same safety. We all want to be looked after the same way. I understand he [Cooke] is on my team but, hey, he's in a tough spot."

So what does this say about the inaction by both the Bruins and the NHL? You've got Matt Cooke's teammate of 2 years, who he won a Stanley Cup with, telling the media that he thinks Cooke deserved some sort of discipline.

Unfortunately, Guerin's remarks are about ten times stronger than Claude Julien's in the aftermath of all this. Maybe Guerin should be in the suit behind the Bruins' bench.

168 minutes, 57 seconds. That was the gap between multi-goal Bruin leads. It was March 6th on Long Island when the Bruins last held a 2+ goal advantage.

But because it was the best Bruins game I've seen them play since... well, a long enough time. In a pre-game interview, Mark Stuart said the team was hoping for an "ugly win," simply wanting anything to get them 2 points. This win was far from ugly.

Normally, my Bruins' recaps are an airing of grievances, Frank Costanza on Festivus style. But this will be the opposite: a list of praise, because quite a few Bruins put in very good efforts last night.

Tuuka Rask got Daisuke Matsuzaka support from his offense, but he had an excellent game in his own right. He made a huge cross-crease save in the 1st when it was 0-0, and that certainly changed the dynamic of the game early on. He also made another athletic stop when it was 4-1, which essentially closed the door on the Flyers' chances of winning.

Patrice Bergeron had a goal and 2 assists in an excellent three-zone performance. The Bruins need his offense in order to consistently score goals.

David Krejci and his line looked like they did last year. Krejci-Wheeler-Ryder totaled 70 goals last season. They're only up to 41 this campaign, but they were outstanding last night. Wheeler's first goal was the end result of textbook hockey played in all three zones. Wheeler and Ryder harassed the Flyers as they tried to carry through the neutral zone. Then Wheeler forced a turnover, passed it up to Krejci, who carried it into the offensive end. Then Wheeler got it, and calmly made a slick move that beat Leighton and put the B's up 1-0.

Brad Marchand's stat line looks pretty dull. 11:02 on ice, 1 hit, 0 shots, 0 assists, 0 blocks, 0 PIM, etc. But that one hit was when he sent James van Riemsdyk over the dasher and into the Philly bench. Marchand had a solid night, didn't make mistakes, played within himself, and did what he could when he could.

The same can be said of Vladimir Sobotka, who was a bit busier. He made his presence felt, and I was actually surprised to see that he was only on the ice for 12 and a half minutes because he made so many solid plays with and without the puck.

A lot of people have whined that the "Bruins didn't do anything on deadline day." Tell that to Dennis Seidenberg. It's fun to watch him and Chara play on the ice at the same time. And it's a relief to have him on defense as opposed to Derek Morris. Seidenberg had his best game in black and gold. He had a clever assist, was a deserved +3, and blocked 4 shots. Maybe it's because he's from Villingen-Schwenningen, Germany, but he's quickly found a place in my exclusive Bruin Binky Club.

I'll give marginal credit to Dennis Wideman too. He had a good game, and was actually consistent for 60 minutes.

Mark "Crazy Eyes" Stuart scares me sometimes. Lucic and Thornton might be the brawlers on this team, but Stuart has the most rage. A pair of fighting majors and a nice display of intensity.

Now, this is just one game, one mile-marker on a very long and harsh road. There's a big game on Saturday in Montreal that has lots of playoff implications. It starts at 7.