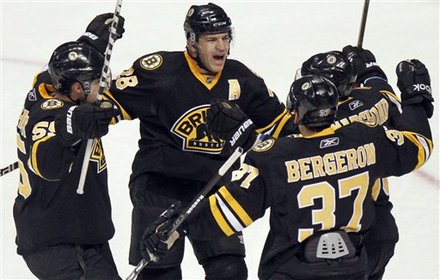 The Marchand-Bergeron-Recchi line continued its hot-streak, combining to score 4 goals Saturday afternoon in Denver. At least one of these three guys had a hand in all 6 Bruins goals. Marchand scored his 11th and 12th, including his NHL leading 4th shorthanded goal. Lucic also scored twice, his 18th and 19th. The production from Marchand and Lucic is a big reason why the Bruins offense is markedly better than last year's.

The B's have scored the 7th most goals in the NHL. Did you know that? I didn't until I looked it up. The 37 goals they've scored in their last 8 games have boosted their position a bit. But even a few weeks ago, they were in the middle of the pack, so they weren't too bad. Last season, they were 2nd to last in goals scored. They've improved from 2.5 goals per game, to 3.1.

Has the offense "turned the corner?" In some ways, yes. What interests me, however, is how well the offense plays when they're not scoring goals. An offense can contribute to victory without scoring many goals. An offense that takes care of the puck, has consistent breakouts, and spends time near the opponent's goal (and far from their own) is how close games against tough opponents are won. I'd still like to see more of that when this team faces the likes of Montreal and Philadelphia.

Colorado is not a tough opponent. Although holding them to 2 goals is praiseworthy, especially since the first one pinballed around before sneaking over Thomas. Thomas, by the way, was brilliant. His play kept the Avalance from making this game too interesting. 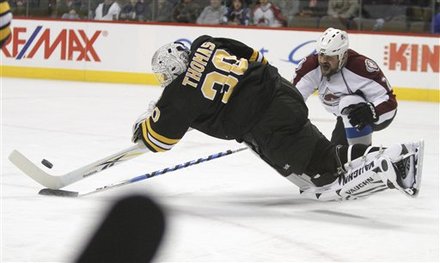 Savard got hurt on a clean hit by Matt Hunwick. His face was pinned against the boards by Hunwick's shoulder, and with Savard's post-concussion struggles, the Bruins are being understandably cautious. No news yet on his condition, although he's returned to Boston, and it doesn't look like he'll play tonight.

Bruins in Los Angeles late night tonight. The Kings are 12th in the West, but have a good home record. To take 4 points from this short West coast swing would be excellent.

The Rays stirred up the AL East over the weekend by signing former Sox outfielder Manny Ramirez, and former Sox and Yankee outfielder Johnny Damon.

If this were 2006, these would be monumental acquisitions. As it is, these pickups shouldn't shake up the standings too much. But it is something noteworthy to discuss. And if Tampa Bay has a fanbase, it will be entertaining for them to have some big name talent watch.

Manny Ramirez hasn't hit more than 20 homers since 2008. He hit 9 in 90 games last year. His OBP is still as impressive as ever (.409 last year. compared to a .411 career OBP), but his slugging numbers have dropped considerably, ever since he was suspended for PEDs. Coincidence? Perhaps. He's getting up there in years too. He's 38, and it's hard to imagine a resurrection at that age.

Manny's contract is said to be worth $2 million for one year, while Damon's will pay him $5.25 million (Source: SI.com). Manny's salary seems reasonable, and should be recouped by the added attention he'll bring to the team. Damon's seems a bit high, especially if the primary goal was to generate interest in the team. Then again, both guys are Boras clients, and this was probably a packaged signing. So Manny is the 39 cent soda that comes with the Johnny Damon value meal.

These signings will give the Rays more press than they will victories. I guess they don't have much to lose with either signing, and at least they'll have some names on the field. But in the long run, these moves are a turn in the wrong direction for that franchise. This reminds me of when they signed Wade Boggs, and when Greg Vaughn was down there. They've acquired names, not talent.

But even when they had no-name talent, and made it to the World Series, their city failed to support them.

It should make Rays/Sox games more intriguing, even if it is just for off-field storylines. The Rays come to Fenway on April 11.

Photo Credit:
John Cordes/Icon SMI
Posted by rob at 10:00 AM No comments: