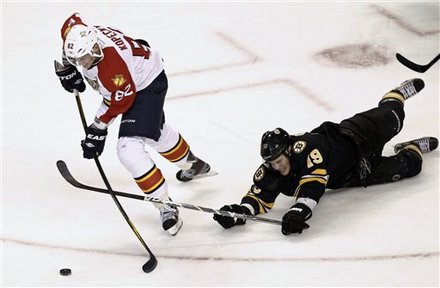 The Panthers are atop the Southeast Division for a reason. Unfortunately, they're also 21st in attendance. This is a pretty good team, and it doesn't belong in Miami. It belongs in Quebec or Hamilton. Even Hartford.

Anyway, it took Jose Theodore having the game of his life, plus numerous dents on the posts, for Florida to win this game. I don't like attributing posts to bad luck, but they certainly are near-misses. The Bruins have one goal in their last 120 minutes, but it hasn't been because they've been playing poorly. They haven't finished, haven't gotten the bounces, but they are creating the opportunities.

I look at a game like this one like a baseball game when all the hard hit balls are right at an opposing fielder. It's just one of those games. The Bruins aren't a team of snipers. They're going to have nights like this.

The B's are in Columbus Saturday night.