Patriots Stampede Colts on the Ground 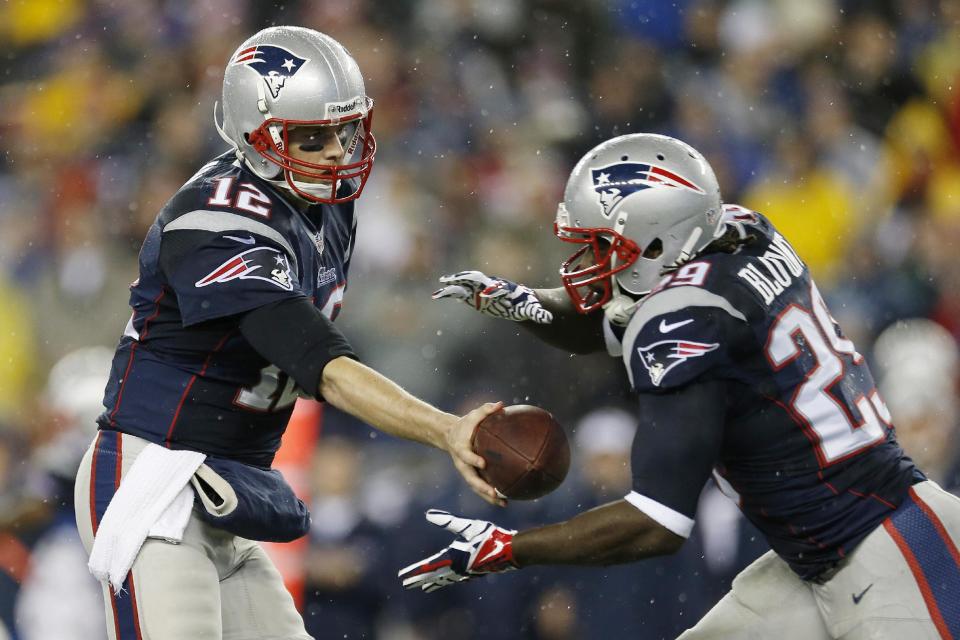 The game wasn't as lopsided as the 43-22 score suggests. There were periods that the Colts were just a play away from gaining control. They never made that play. All the big plays were made by the Patriots, or went the Pats' way.

Even the safety after a high-snap on a punt was a positive result of a Patriot miscue. Had punter Ryan Allen been tackled inside the 5, the Colts probably would have soon scored a touchdown, if not almost certainly a field goal. Instead Indy was awarded with 2 points, the Patriots got to punt from the 20, and Indy put together a long drive that ended with a turnover. If not for the safety, a 21-10 game probably would have become a 21-17 game.

Here's some earth-shattering analysis: the Patriots won this game on the ground. LeGarrette Blount, Stevan Ridley, and Shane Vereen combined for 233 yards on 43 carries (5.4 per carry). They demoralized the Colts defense in the first half. In the second half, they castrated them. This success on the ground set up play-action, which allowed for some big plays in the air. The Colts also brought their safeties close to the line, which allowed Blount to score a 73-yard TD in the 4th, because once he got past the first level there was nothing but green fieldturf ahead of him. A green carpet, if you will, to the end zone. To victory.

There was one drive in the first half that especially reminded me of Corey Dillon and the 2004 Patriots. The Pats ran the ball six straight plays, achieving two first downs. Then they went play action, which the Colts bit on, and Julian Edelman made a 27-yard reception. Eventually Blount finished the drive with a touchdown. His 4 TDs set a new franchise postseason record. Curtis Martin was the previous record holder with 3.

If you look at Brady's numbers (13 of 25, 198 yards, 0 TDs) one might think he had a bad day. I thought he played quite well. He made some plays, especially on 3rd down (Pats converted 11 of 18). He protected the ball. He got rid of it when he had to. He made big plays downfield (e.g. Danny Amendola's 53-yard reception). He wasn't just a "game manager" handing it off and making the occasional safe pass play.

He was also an adequate holder. And Stephen Gostkowski was a good punter. This team does not allow injuries or change to faze them. Shit happens, do your job, even if it's a job you haven't done in years or have never done.

And the D made some big plays themselves. Alfonzo Dennard's interception on the opening drive being the most obvious example.

Jamie Collins made some of the biggest plays. When it was 21-12 his 3rd and goal coverage of Coby Fleener in the end zone forced Indy to settle for a field goal. When it was 29-22 he sacked Andrew Luck for a loss of 8 and the Colts eventually went 3 and out. When it was 36-22 his interception effectively ended the game.

Collins' timing was perfect. He made big plays at key times that prevented the Colts from building momentum to mount a comeback. And he made a big play in the 4th quarter that sealed a victory. A sack, 2 tackles for a loss, 3 QB hits, a pass defended, and an interception. It's just one standout game from the rookie but his athleticism is obvious. I'm looking forward to seeing what he does for the team in 2014.

Of course 2013 isn't over yet, not for the Patriots. The Pats have another AFC Championship game to play. This time against Peyton Manning and the Broncos. The weather forecast for Sunday's game in Denver is partly cloudy with a high of 55 and a low of 33. This week's forecast for the New England region is partly optimistic with a 100% chance of trivial speculation and excited trash talk.