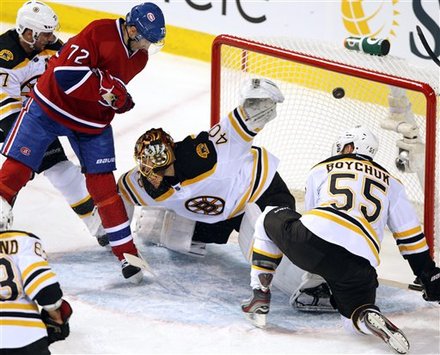 The B's won the Cup and returned almost the entire team intact. And maybe that's part of the problem. This team isn't playing like they have anything to prove. Guys who played with hunger last year (Marchand, Horton) aren't playing with the same ferocity every shift. Maybe it's time for some healthy scratches, maybe it's time to see guys like Caron get more ice time, maybe it's time to make a trade.

Give credit to Montreal for blocking shots (29 of them in total, Spacek blocked 7, Gill blocked 5) and for breaking up Bruins' passes, but it didn't seem like the Bruins properly respected Montreal's abilities to do so. How many passes did the B's try to slip past Montreal sticks that were already down on the ice? How many times did one sole Bruin try to carry the puck through 2 or 3 Canadiens?

The breaks in Saturday's game didn't go the Bruins' way. The Habs had the first 5 Power Plays. The B's hit a few posts in the early stages. But the Bruins didn't capitalize on things that did go their way. They failed to convert a lengthy 5-on-3 into a goal (Seidenberg's failure to keep the puck in the zone during that Power Play sums up how the Bruins' season has gone). And almost every Bruins' possession was short and ended with a whimper.

Montreal matches up well against the Bruins. Their speed allows them to get to loose pucks first, allows them to harass opposing forwards, and makes their counterattack quite deadly. The Bruins' strength is their physicality. And that was only sporadically apparent Saturday. We've seen the Canadiens fear the Bruins before. They're not afraid right now though.

And don't let Pussy Kunt Subban get under your skin. That's his goal. And yes, I would say that to Subban's face, so long as we were in a Foot Locker or at the zebra enclosure in a zoo. The sight of those black and white stripes make him go down with just a nudge.


Ference's post-Subban penalty was a bad call, but Lucic shouldn't give Subban the excuse to dive. If you're going to get a 2 minute slashing penalty, make Subban feel it for 20 minutes. And if Subban wants to play these silly games, then drive Brian Gionta through the boards in response.

The Bruins have some fundamental problems to work out. Their breakout is ugly. They're not dumping and chasing enough. They don't move the puck with any purpose. They're not imposing their style of game on the opposition.

And when is Joe Corvo going to do anything positive? he's an improvement over Kaberle, but who wouldn't be? He's been sound defensively, but hasn't contributed to the offense, and has looked tentative on the breakout.

On the bright side, the goalies are playing well. Tim Thomas doesn't look a year older, and the goals Rask allowed weren't his fault. The Penalty Kill has been reliable. Shawn Thornton is doing his job. Tyler Seguin looks like he's been in the NHL for 4 years. He's on pace for 30+ goals and 80 points. Bergeron is doing the little things, which is more than can be said for some of his teammates.

The Bruins have the talent, some of the guys are playing very well, but some individuals making mistakes and not making good plays are sabotaging the team. And they need to shape up or be shipped out.

Bruins host the Senators Tuesday night. Ottawa are 7-5 and have won 6 straight. When a hot team meets a cold team it'll either be a blowout, a turning point, or a tornado.

Steelers Dress as Patriots For Halloween, Pats Dress as Steelers 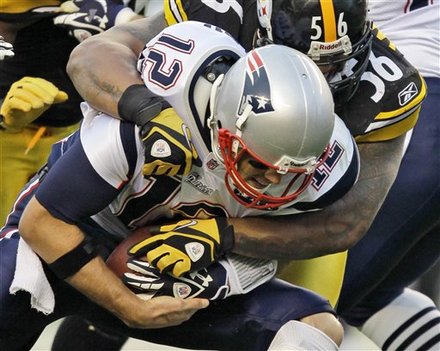 Do you know what's alarming? As ugly and painful to watch as the Pats' D was on Sunday, they were the best unit on the field for New England. They kept the Patriots in the game. They held the Steelers to 3 field goals and 2 TDs in the Red Zone. They intercepted Roethlisberger which set up an 8 yard TD drive. They were on the field for 2/3 of this game, and they played much better than the offense.

Give credit to the Steelers for doing two key things defensively: pressuring Brady (from unanticipated angles) and neutralizing Wes Welker. Brady was rarely comfortable and Welker was held to 6 catches for only 39 yards. When Welker did catch the ball, he was immediately (and forcefully) greeted by a Pittsburgh defender.

The Patriots shot themselves in the foot, too. Four false start penalties by the line (give partial credit to the Steelers' pass rushers), and they all came at key moments in drives. The Pats didn't take advantage of the penalties Pittsburgh committed, they didn't even try to run the ball, they didn't do much to stop Pittsburgh's pass rush like run some screens with Woodhead and/or Faulk. The Patriots offense was 3/10 on 3rd downs.

It was nice seeing Faulk in the backfield, he played well for being 80 years old. Gronkowski was stellar. He had more guys on him than Bibi Jones after a baseball game. And unlike Bibi Jones, he didn't go down easily. That's about it as far as good offensive performances go.

The defense did a decent job, but it was far from pretty. The blitzing was predictable. Blitzing worked for the Germans in 1940 because France didn't know where or when it was coming. The Patriots sent extra men in predictable situations, and sent them in predictable directions. And the Steelers ate them up for it.

If any team wants to move the ball against the Pats, all they have to do is run 6-10 yard curls. It's open. Every single down. Thankfully, the Pats clamped down in the Red Zone and turned possible touchdowns into field goals. If they hadn't, Pittsburgh would have won in a blowout.

Speaking of field goals. This was Gostkowski's worst game as a Patriot. One missed field goal, two botched onside kicks. He was one of many Patriots that simply didn't do their job.

Then there was the Patriots' clock management in the 4th. Instead of challenging the refs when Gronkowski appeared to catch the ball over the goal line, they wasted 1:37, taking their time to set plays up before finally scoring after several attempts.

The Pats are 2-2 on the road. Those 2 wins were in Miami and Oakland. Those 2 losses were in Buffalo and now Pittsburgh. The Patriots haven't beaten a good team on the road yet. And they play in the Meadowlands in 2 weeks. I'm more than a little concerned.

They host the Giants Sunday evening.