It's Called a Winning Streak 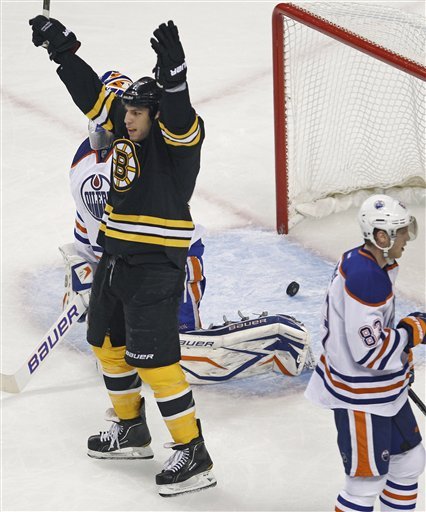 The Bruins won their 4th in a row last night, burning the Oilers for 6 goals. The B's improve to 7-7 and are .500 for the first time since starting the season 1-1. They've scored 24 goals in this win streak.

There was a nice mix of types of goals for the Bruins. Boychuk and Caron scored some hard-work, "blue collar" goals that were products of fighting for loose pucks and earning possession. They scored some speed goals, some snipes, and some Mark Recchi stype tip-ins from within the crease.

Tyler Seguin is too good. He scored his 9th. And even though it pinballed off three Oilers before going in, the goal was a product of his speed and his ability to take advantage of a bad change by the Oilers. He also got an assist because he moved the puck well on the Power Play. He also drew two penalties, and the B's scored on the ensuing Power Plays.

Joe Corvo is starting to show up on offense. I've been waiting to see that. He's scored 10+ goals three times in his career and 20+ assists five times. We hadn't seen much offense from him before the last two games. Last night he had 3 big assists, and was a big part of all 3 of those goals. They weren't just token assists. He's also getting more comfortable playing with the Bruins' defensive system.

The recent proliferation of offense has allowed the Bruins to play Rask for a few games. Thomas will have at least a week off between starts, and that's nice to be able to do.