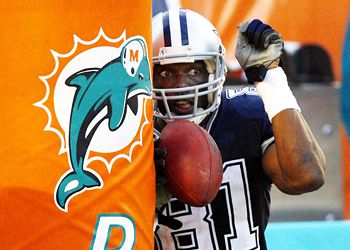 Terrell Owens just doesn't know how to shutup. I guess he didn't learn his lesson from 2007, when he talked about popcorn and "the real #81" leading up to the Patriots/Cowboys game. A game the Pats won 48-27. You'd think that he would learn his lesson.

What did he say now. When asked if he had something up his sleeve for Monday's game against the Patriots, he responded:

"Nah, nothing up my sleeve. I might bring my spy camera out, though."

Way to be topical and current, Terrell. And thanks for giving the Patriots bulletin board material. It usually works out for us here in New England.

Terrell Owens' career is bloated with baseless trash-talk and whining. He's a media-whore who never met a camera he didn't like, apparently not even a spy camera.

WHEN WILL WAKE START AGAIN?

The Tim Wakefield question remains without a solid answer. Francona and the Sox have "penciled" him in for a start in the team's upcoming trip to Baltimore, the weekend of the 18th. A couple of off days allow for the Sox to go with a 4 man rotation for now. But that won't be possible again. The Sox play their last 20 games in a row without a day off. This stretch starts September 15.

Wakefield can pitch, he just can't field. That's why he was scratched for the Tampa series. Wisely, scratched, I might add. The Rays would bunt and run like crazy on him.

If Tim Wakefield still can't field, I think it may prove to be too much of a liability in a playoff start.

These guys are the key to the success or failure of the defense. A good LB Corps can cover for deficient DBs and/or a lethargic line. When the Pats align in the 3-4, the linebackers are the playmakers. In the 4-3, they still have to make the plays as blitzers, in pass coverage, and stopping the run.

Adalius Thomas is the veteran leadership among this group. The 6' 2" 270 pounder is a fierce pass rusher, and an able tackler. He's the guy opposing RBs want to avoid, and opposing QBs will have to look for. In the 3-4, he typically lines up very close to the line of scrimmage as an OLB. But he can also play inside, which he did in 2007. Nevertheless, he's much better on the outside.

He missed the 2nd half of the season, but still amassed 5 sacks. Look for about 10 from him, as well as an interception or two. It's up to players like Adalius to rush the passer, and force some hurried throws. Otherwise, the secondary is dead meat.

I'm really pumped to see Thomas as an OLB in a 4-3 alignment. He's almost too big for the position in a 3-4, but his size becomes a great asset on the outside of a 4-3. Also, if there's a good pass rush from the other side (or from the D-Line), Adalius becomes exponentially more dangerous to opponents.

Suffice it to say, Mayo is a quality tackler. And in a 4-3, he'll be playing center-field in the defense. Nobody will want to run up the middle if they have to squeeze by Wilfork, and then meet Jerod Mayo. He's a solid player, the kind of guy that defenses are built on.

Who is Gary Guyton? Well he went to Georgia Tech, and was signed as an undrafted free agent in 2008. He's come out of nowhere to be a staple in the Patriots' LB Corps, whereas drafteed like Bo Ruud and Shawn Crable have dissapointed. Guyton had the fasted 40 time among LBs in his combine. He's 6' 3" and 245, and can play adequately on the inside and outside. He won't amaze like Tedy Bruschi in 2003, but he is a step up from Tedy Bruschi in 2007.

The only thing I allow myself to know about Pierre Woods is that he recovered a fumble in Super Bowl XLII, then fumbled it right back to the Giants. I'm sure he's a decent player, but he has a lot to do to make up for that miscue. He's projected to be an OLB, sharing time with Derrick Burgess.

Speaking of Burgess, remember the last time the Patriots had a linebacker with the number 0 on his jersey? His name was Bryan Cox and the Pats won the Super Bowl the year he played for them.

Burgess is a very good pass rusher, a Roosevelt Colvin kind of guy in a 3-4 defense. He played DE for the Raiders. He won't play every snap, but look for him to be a feature LB in passing downs. I wouldn't be surprised if Burgess accumulated 8+ sacks this season. But if he and Adalius are on the field at the same time, offensive lines will be very confused, helping both players.

Tully Banta-Cain is back, but this time as #95. He's an excellent role player to have on the bench, and in certain situations. He's looked really solid in preseason.

What frightens me is the lack of depth at this position. If Adalius goes down, as he did last year, who replaces him? If Mayo goes down, the LB Corps and thus the defense teeters on collapse. This position could be a house of cards for the Patriots.

Sources:
ESPN.com
Patriots.com
Posted by rob at 12:30 PM No comments:

The Sox belted 6 homeruns, and Buchholz combined with Bowden for a shutout of the lowly Baltimore Orioles. The Sox are now 11-2 against the O's.

Thank goodness for Clay Buchholz. He's turned into a more-than-solid #3 pitcher in this rotation. He's got a 1.69 ERA in his last 3 outings, and 6 of his last 7 starts have been Quality Starts. He's won his last 4 decisions.

Jason Berken takes the mound for Baltimore Wednesday night. Paul Byrd goes for the Sox. What's the over/under on this game? 25?

Photo Credit:
AP Photo/Steven Senne
Posted by rob at 3:25 AM No comments: