SOME SOX WIN AWARDS, SOME DON'T

I know that most of the news that will be discussed in this post is not very new at all, but I've been awfully busy working at BC and Gillette Stadium sporting events. Apologies for the lateness.

Let's start off with the good news, which is the awards that Red Sox players have been honored with since the season ended.

Kevin Youkilis won a Gold Glove at first base. He had no errors playing first base for the entire regular season. He also saved errors from guys like Lugo, who have difficulty throwing with accuracy. This is Youkilis's first Gold Glove, and his first major award.

Coco Crisp seems to have gotten screwed out of winning a Gold Glove. Gold Gloves are funny awards, in that they're usually rewarded based more on reputation than performance. Moreover, all of us in Red Sox Nation saw Crisp everyday, and were impressed with his defense. We didn't get much of a chance to see Torii Hunter, Ichiro Suzuki, or Grady Sizemore. All three of whom are great outfielders. But we all knew before the season began that Ichiro and Hunter would win Gold Gloves, so long as they were healthy.

David Ortiz won his fourth straight Silver Slugger Award as a DH. This ties him for the all-time lead in Silver Slugger Awards at that position. He is tied with Edgar Martinez and Paul Moliter. Papi also underwent arthroscopic surgery, which was said to be a success. He played with a knee injury all year, which may have caused a reduction in power. His 35 homers was his lowest total with the Sox since 2003.

Josh Beckett finished 2nd in the Cy Young voting, behind C.C. Sabathia. In case you couldn't guess, Cy Young voting is done at the conclusion of the regular season, before the playoffs start. Strangely enough, Sabathia did not finish atop one of the Pitching Triple Crown categories. He was 2nd in wins with 19 (behind Beckett), 5th in ERA (behind Erik Bedard, John Lackey, Fausto Carmona, and Danny Haren), and 5th in strikeouts (behind Scott Kazmir, Johan Santana, Bedard, and Javier Vazquez).

Now I'm not saying that Beckett deserved the Cy Young more than Sabathia, but when you look at C.C.'s numbers compared to other pitchers, they just don't amaze you. I think he won for three main reasons.

#1. He threw more innings than anyone else. He made 34 starts and pitched 241 innings. That's 7.08 innings per start, which is very good.

#2. His strikeout to walk ratio was very good. He struck out 209 batters and only walked 37.

#3. He was publicized. His team went on hot stretches late in the season, passing Detroit in dramatic fashion. Every game Sabathia pitched was important. His starts were highlighted by ESPN, and we either on national television, or were heavily documented the next day on SportsCenter. He also beat Johan Santana about 4 times this year. But with the Twins' offense, that isn't too difficult. Meanwhile, Beckett and the Sox never had a "must-win-game" in the regular season. There was no dramatic winning streak or playoff push.

Despite finishing 2nd in the voting, everyone in baseball knows who the best pitcher was in 2007... 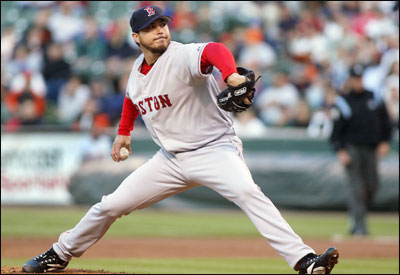