Richard Seymour, who was perfectly happy to play for the Patriots, has yet to show up for the Oakland Raiders. Seymour, according to Rodney Harrison, might sit-out of Raiders camp/practice, insisting that the Raiders agree not to franchise him in 2010.

This deal made no sense for Oakland, and only goes to show how awful that organization is. Why give up a 1st round pick to rent a player for 1 year, or even 2 years if they intended to franchise him? Does Al Davis still think that people WANT to play for the Raiders?

I do feel bad for Seymour, who goes from anticipating a season full of meaningful games, playing alongside great players, and hopefully going deep into the postseason. Now what does he have to look forward to? It's pretty sad that the best part of playing for the Raiders is living in the shithole that is Oakland.

And to people here in New England who still don't understand this deal, the Patriots are sacrificing 1 season of Seymour for a 1st round pick. If you think the Patriots will actually select someone with this 1st round pick, then you haven't been paying attention for the last 8 years.

But the Pats actually might take someone with a top 10 or even top 5 pick in 2011. There's potentially going to be a cap on rookie pay starting in 2011, which makes selecting early much more desirable.

The critics of this deal will point out how much of a crapshoot the draft can be. And they're right. You get a lot of clunkers in the draft, in every round. You also get some studs that can change teams. Examples of game-changing top 10 picks:

After this season, either Seymour or Wilfork were going to go. I prefer Wilfork. Think, if the Pats had sent Wilfork to Oakland, would it still be possible to utilize the 3-4 defense? Nope.

There was an opportunity to get an early 1st round pick, which could be turned into a late 1st round pick plus a 3rd round pick. Or it could be a pair of 2nd round picks. Or the pick could packaged with others and be traded for a stud runningback.

Draft picks are currency to the Patriots, and they just cashed in big-time for a player who was leaving after the season anyway.

The neverending story that is Daisuke Matsuzaka's rehab will add a new chapter Wednesday in Winston-Salem, NC. He'll pitch for the single-A Salem Red Sox in their Carolina League playoff game against the Winston-Salem Dash.

Daisuke's struggled in his last two outings. But afterword, through a translator, he'll give some BS about "experimenting" with one thing or another. Well so far in his rehab, Dr. Dice-K and his madcap experiments haven't produced anything.

We all remember the debacle about Daisuke and the Sox shoulder program. We all know that the Sox weren't happy with his off-season conditioning program that consisted of throwing, more throwing, then some more throwing. And then he threw even more in the WBC.

Daisuke hasn't subscribed to the way things are done in America. There wasn't any sucuh drama when Hideo Nomo, Hideki Irabu, and other Japanese pitchers made the transition from Japan to the Majors. Why is Daisuke different? How come Junichi Tazawa doesn't have his own throwing programs?

Frankly, I'm sick of Daisuke's drama. Just do what the rest of the team does, and then if that doesn't work, figure it out on your own. But Matsuzaka's regimen of his own homespun remedies have done nothing but fail him, and fail the team.

Source:
Winston-Salem Journal
Posted by rob at 1:18 PM No comments:

The Pats traded tight end David Thomas to the Saints for a 7th round pick. I had always had high hopes for him. He was drafted by the Patriots in the 3rd round of the '06 draft, but injuries hurt his career in Foxborough.

The Patriots also cut tight end Alex Smith after using a 5th round pick to acquire him.

Shawn Crable was placed on injured reserve, ending his 2009 season before it started.

This might be the strongest unit on the team, top to bottom. So strong, in fact, that the Patriots will probably use more 4-3 than 3-4. Vince Wilfork should be a 5 time Pro Bowler, and Ty Warren might be the most underrated linemen in the game. Then there's pass-rushing specialist Jarvis Green, who can play on the end in a 4-3. Veteran Mike Wright and rookie Ron Brace fill up the depth chart inside at tackle.

Vince Wilfork is superhuman. He's big, strong, and fast. He was 3rd on the team in tackles last year with 45. He only has 7.5 career sacks, but that's because they don't award assists to the nose tackle who absorbs a double-team, allowing the ends and linebackers to get to the QB.

If the Pats go to a 4-3 defense, Vince Wilfork will become a highlight reel player. He'll get sacks, tackle RBs for a loss, and own an entire side of the field. They call the O-Line and D-Line "The Trenches." Wilfork is The Tank that makes trench warfare obsolete.

Ty Warren, much like Richard Seymour, was drafted as a tackle, then converted to an end in the Pats' 3-4 defense. I consider him to be one of the most underrated defensive players in the game. If he lines up as a tackle in the 4-3, he will prove me right. You can't double team Wilfork, then hope to stop Warren and either Green or Seymour on the end. Warren's a sure tackler, and once he gets to the QB, he rarely allows him to escape. He might be a Pro Bowl contender this season.

Mike Wright and Jarvis Green provide the depth. Wright had 22 solo tackles and 2.5 sacks in limited time last year. Green only had 2 sacks last year, but before that he registered 6.5 in '07, and 7.5 in '06. He's an excellent backup D-End. 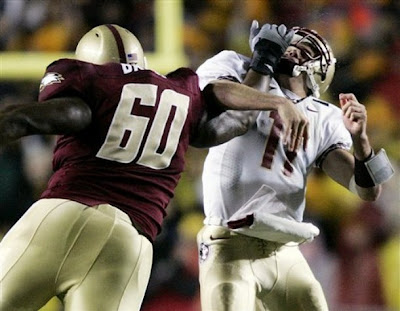 The defensive secondary is weak, and the LB's have holes here and there. The QB pressure and run-stopping needed to atone for these deficiencies MUST come from the defensive line.

I'll enjoy BC's 54-0 victory over Northeastern as much as possible. Wins for the Eagles will be few and far between this season, so let's not spoil things by talking about Northeastern's 2-10 record last year in I-AA. And don't forget, two ACC teams fell to I-AA opponents this weekend, so beating Northeastern isn't totally meaningless.

BC used 4 quarterbacks in this game. All did well, none did great. The position is still wide open. Combined, they were 15/22 for 205 yards and 2 TDs. It was the rushing game that did most of BC's damage. 6 players combined for 236 yards and 4 TDs.

This was a preseason game for BC, no doubt about it. But it's not like the Eagles are alone in scheduling cupcakes to start the season. #1 Florida scheduled Charleston Southern, #2 Texas played Louisiana-Monroe, #4 USC hosted San Jose State, and #9 Penn State scheduled Akron. And all these games were blowouts.

I don't mind games against I-AA teams, but they shouldn't count for something like bowl eligibility, especially if there are 2 I-AA games on a team's schedule.

The "real" season starts for BC next Saturday, as Kent State (who went 4-8 last year) comes to Chestnut Hill. The Eagles best stockpile these easy wins while the getting is good, because after Kent State it's a road trip down to Clemson.

Photo Credit:
AP Photo/Lisa Poole
Posted by rob at 10:18 AM No comments: