Today is Columbus Day. A day named after the guy who discovered the Americas. But Christopher Columbus is one of the most overrated and lucky bastards in history.

Firstly, he wasn't the only person who thought that the world was round. Everyone with a shred of education knew that. The Greeks knew that centuries earlier, and people could see things like a ship's sails disappearing on the horizon.

The people who doubted Columbus said that the trip from Europe to China was too long. Columbus thought it was only 3,800 miles away. China is 16,900 miles west of Spain. If not for the existence of the Americas, Columbus and his crew would have died from starvation on their way to China.

After getting to the Americas, Columbus enslaved or killed the natives, then mismanaged the colonies so poorly and treated his own people so badly that he was arrested and thrown in jail. He died as kind of a failure.

He wasn't the first person to the New World, wasn't the first European (the Vikings were), and he wasn't even looking for it. He became an important historical figure by accident, sort of like Eli Manning in Super Bowl XLII. He was along for the ride at a pivotal event and has since sucked.
Posted by rob at 1:00 PM No comments:

Bruins Back to Winning

The Bruins were a little more like themselves on Saturday. Thomas was outstanding in net, the Penalty Kill was impressive, and the Bruins kept the pressure on goal, shooting 42 pucks at Mathieu Garon.

Tyler Seguin has looked great in these two games. He's comfortable, he's focusing on making plays, and he deservedly won 3rd star Saturday night. He was +2 with 2 assists, but what I like seeing is that he was on the ice for just over 16 minutes. And 4:15 was on the Power Play, 0:15 was shorthanded. That demonstrates how much he's grown as a player. Seguin only averaged 1:21 of PP time per game last year. And he spent 1:58 total on the ice shorthanded. That's less than 2 minutes for an entire season.

Julien clearly trusts Seguin more, and it's paying dividends. Seeing Marchand on the Power Play also looked good. Marchand also spent over 4 minutes on the ice with a man advantage. He averaged 0:32 per game last year.

Patrice Bergeron only had 1 assist, but his impact on the game was tremendous. If you DVR the game, and the Bruins score with Bergeron on the ice, just rewind the recording a few seconds, and you'll likely see him make a small but meaningful play that eventually leads to the goal.

Bergeron needs talented players around him to truly be productive. He's not a scorer on his own. But put the likes of Marchand and Rich Peverley around him, and goals will occur.

I'm not even going to try to sum up Tim Thomas' performance. Just watch:

Bruins host the Avalanche this afternoon in a matinee game. 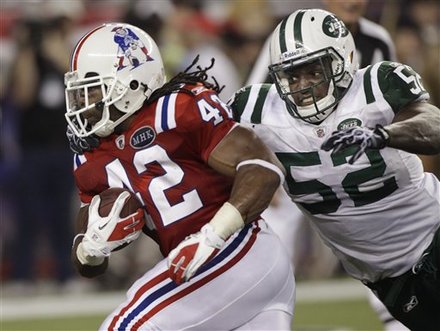 If you were to compare the Patriots' offense to cuisine, you could say that it's normally like gourmet Filet Mignon served in a classy restaurant. On Sunday, the Pats' offense was more like hamburgers and sausages served at a greasy diner. The Patriots actually ran the ball more than they passed it (35 compared to 33). And they ran the ball well.

The Jets might have been expecting a pass-heavy game, but what they got was a heaping helping of BenJarvus Green-Ellis. He ran for 136 and 2 TDs. He averaged 5 per carry, and if he wasn't able to get the job done, then the Pats' gameplan simply wouldn't have worked.

Before I gush on and on about a nice win against our arch-rival, let's think about a few things: Were the Jets even close to being on the same level as the Patriots? Nope

So why was this a 6 point game halfway through the 4th? Why was it a 3 point game at halftime?

The Patriots were undoubtedly the better team Sunday, which is good. The Jets are 2-3, with an offense that's not rushing the ball well and a QB that can't be counted on (even by his head coach). But mistakes allowed the Jets to hang in there.

Aaron Hernandez not being able to hang on to a touchdown pass. He's got some ball control issues. I wouldn't go so far as to say that it's a problem, but there have been too many times when he'll be downed, then the ball will pop loose. And on a team that never ever fumbles, stuff like that stands out.

The Patriots were an instant replay review from another Red Zone turnover. The refs got the call right, but Branch was still very close to catching a ball then fumbling it.

Then there's the big kickoff return. That's usually a Patriots' strength, but the timing of that return was like life support to a dying patient. The Jets were on the ropes, that return gave them new life.

I'm not trying to be a downer. The Patriots are 4-1, they're tied for first in the AFC East. They're clearly better than the Dolphins and Jets at the moment, and they now have a running game to go along with that vaunted passing attack. This team's biggest problems are their own mistakes. That's fixable. And to end on a positive note, if these problems do get fixed, they'll be very, very dangerous.

Patriots host the Cowboys next Sunday at 4:15.