Bruins Back to Winning 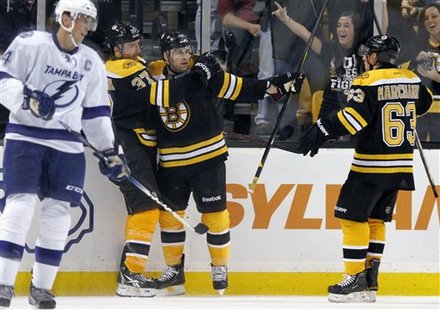 The Bruins were a little more like themselves on Saturday. Thomas was outstanding in net, the Penalty Kill was impressive, and the Bruins kept the pressure on goal, shooting 42 pucks at Mathieu Garon.

Tyler Seguin has looked great in these two games. He's comfortable, he's focusing on making plays, and he deservedly won 3rd star Saturday night. He was +2 with 2 assists, but what I like seeing is that he was on the ice for just over 16 minutes. And 4:15 was on the Power Play, 0:15 was shorthanded. That demonstrates how much he's grown as a player. Seguin only averaged 1:21 of PP time per game last year. And he spent 1:58 total on the ice shorthanded. That's less than 2 minutes for an entire season.

Julien clearly trusts Seguin more, and it's paying dividends. Seeing Marchand on the Power Play also looked good. Marchand also spent over 4 minutes on the ice with a man advantage. He averaged 0:32 per game last year.

Patrice Bergeron only had 1 assist, but his impact on the game was tremendous. If you DVR the game, and the Bruins score with Bergeron on the ice, just rewind the recording a few seconds, and you'll likely see him make a small but meaningful play that eventually leads to the goal.

Bergeron needs talented players around him to truly be productive. He's not a scorer on his own. But put the likes of Marchand and Rich Peverley around him, and goals will occur.

I'm not even going to try to sum up Tim Thomas' performance. Just watch:

Bruins host the Avalanche this afternoon in a matinee game.