Just before the lockout was officially locked, the Bruins signed Milan Lucic to a 3 year, $18 million deal. It's the latest chapter in the Bruins' efforts to never again issue new jerseys or change roster sheets. The B's are deadset on keeping the same group of players together on this team.

Even though Lucic scored 0 goals in last year's playoffs, and a modest 26 goals in the regular season. He's got 15 goals and 20 assists in 65 playoff games. Which isn't good at all. He isn't good on a Power Play. You'd never want to see him on the ice short-handed. He's an inconsistent defender. He's slow, lumbering, inconsistently skates.

I'm just not sold on Lucic. Not to the tune of $6 million. And certainly not when this team is committed to having a roster as similar to the 2011 Cup team as possible.

The problem is, that team won the Cup because Tim Thomas played at inhuman levels. And the Bruins played some teams that they matched up well against (they could out-muscle Montreal, Tampa Bay, and Vancouver. The Flyers had catastrophic goaltending difficulties).

All the players that the Bruins have retained are good, even very good players. None are great. Milan Lucic is not a great player. He's got quality, but he's not a scorer, not a passer, not an any-situation-player, and his production is unreliable. He's a good 2nd liner. The Bruins have one #2 line, but lots of 2nd liners.

If hockey is played in 2012-13, we'll see how the Bruins contend against teams that have done more complex things to improve apart from extending all the contracts of their current players.
Posted by rob at 12:00 PM No comments: 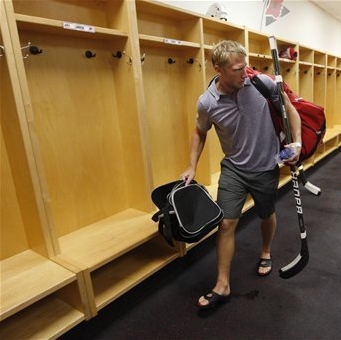 The NHL players have been locked out. The owners wanted the players to lower the percentage of hockey revenues they got paid, instead of sharing revenues with smaller market teams. The idea the owners had was that small market teams could afford to pay players the same as big market ones, and big market teams could pocket all their additional profits. It's not surprising that Jeremy "Ebeneezer" Jacobs is spearheading this greedy endeavor.

There are two kinds of greed in this world. Short-term, avaricious, 7 Deadly Sin kind of greed that seeks immediate gain, forsaking all consequences and repercussions. And intelligent, productive, ambitious greed that "has marked the upward surge of mankind." There's greed that urges you to take all the pennies in the dish by the counter, and there's greed to start a business and produce something.

The NHL owners are hungry for immediate profit. And this foolish kind of greed will destroy this game.

Do you hear much outrage over the NHL lockout? Do you hear wailing in the streets, the sounds of large appliances being hurled through drywall as millions of angry fans struggle to cope with the loss of hockey?

No. Hockey is a regional sport, with a core of fanatic supporters, and a large contingent of casual fans. These casual fans are in football mode, fretting over their fantasy teams. And in February, when football stops, if there's no NHL they'll just watch college basketball and drink more.

For most sports fans in America, the NHL is like a girl you occasionally hook up with when you can't get anything better, and you don't have any strong feelings for. They threaten to never talk to you again unless you get serious with them, and you're kind of fine with that.

The NHL has done decently since the lockout. Total revenues are up. Ratings are better. The big market teams are doing well. Chicago, Boston, LA, New York, and Philly are tuning in to the game. This should be the opening stages of an upward trend for the NHL, not another massive hiccup.

This is no time for ultimatums, or short-term cash grabbing. This might be a time for small changes, but not major readjustments to the owner/player balance. The players are the entertainment. They're the ones with the skills. They're the ones making the plays, scoring the goals, unleashing the hits, taking the risks.

Why should they get less?

Until the owners can adequately answer this question, or until they realize they should stop asking the question at all, I'm letting my beard grow. I trimmed it Saturday. It's a blonde/black/ginger mix, so when it grows it gets sketchy. Tendrils of red hair curl over my lips. Patches of black hairs mix with blotches of blonde on my cheeks. It's not pretty.

This league seems to not want to take care of itself, groom itself, and keep itself presentable. So I will do the same. 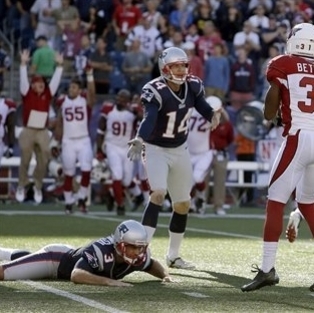 You can point to two special teams plays and say "Here's where the Pats lost the game." The blocked punt that led to an Arizona touchdown, and of course Stephen Gostkowski's missed field goal.

It's not so simple. This was a team loss. The Patriots lost this game, quite thoroughly. Not just a kicker, not just a backup receiver that failed to execute a block.

The play before Zoltan Mesko's punt was blocked, Wes Welker let a ball slip through all 10 of his fingers. He catches the ball and gets a 1st down, Arizona never gets such an amazing scoring opportunity.

Brandon Lloyd also dropped a big 3rd down pass in the 4th quarter.

The Patriots didn't execute. The offensive line was toyed with. Tom Brady wasn't his absolute best. I mentioned Lloyd and Welker. The Patriots couldn't get anything going on the ground. And all the big plays were made by the Cardinals.

But Arizona tried so hard to give the Patriots chances in this game. The fumble by Ryan Williams is a perfect example.

The Pats play the Ravens in Baltimore next Sunday night. Both teams are 1-1 and will be hungry to avoid going 1-2.