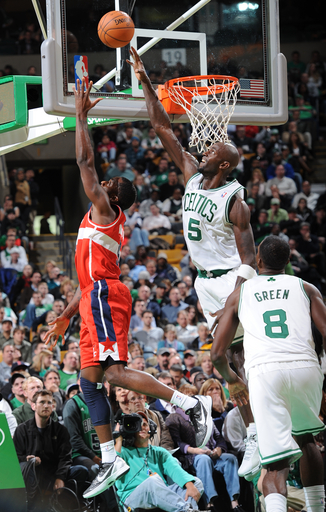 The Celtics beat the Washington Wizards 100-94 in overtime last night. And while a win is a win, it wasn't impressive. At least not for most of the game.

During the 3rd quarter the Celtics turned it on and looked like the team we've been expecting to see. Rajon Rondo and Jason Terry hit a pair of big three pointers, and the Celtics entered the 4th quarter with an 8 point lead.

Which they blew. They lost the 4th quarter and were barely able to force overtime. They had their opponent unsteady on their feet but instead of landing a knockout punch they tried to run out the clock. And yes, I just mixed metaphors from two different sports to describe a basketball game.

The Celtics' final play in regulation baffled me. 9.4 seconds seems like the perfect amount of time to run a play and develop multiple options for a secure shot. A 25 foot shot from Rondo was the best the Celtics could do in that situation? Really?

Thankfully Brandon Bass scored 5 in OT and helped propel the Celtics to their second win of the season.

And does anyone else think Washington's logo looks a bit phallic?

Looks like balls and a cock to me. Maybe Bill Clinton designed it.