EDELMAN OUT WITH BROKEN ARM

Rookie WR Julian Edelman will not be catching passes or returning punts for some time (an undisclosed amount of time, as you may have already guessed), as the Patriots announced that he has a broken arm. Not surprisingly, there's no word as to when he broke it, how he broke it, where (in the arm) it's broken, or when he might be returning.

There's also no word on who will take his spot, as the pass-heavy Pats now have only 3 active receivers. Brandon Tate is an eventual possibility, and there are options from the practice squad. Don't be shocked to see more passing to the tight ends, and guys like Laurence Maroney or Kevin Faulk split out wide, or in the slot.

The Bruins and Sabres made their first EVER trade between each other today. The B's sent a 3rd round pick, and a conditional 4th rounder to Buffalo for winger Daniel Paille.

Paille is 25 and has been nothing short of a disappointment in Buffalo. As I said above, in 39 years, the Bruins and Sabres have never made a trade. The fact that Buffalo doesn't mind directly competing with a team that has Paille on it speaks volumes about how much they think of him out in western New York.

I'm pretty flaccid on this deal. This kid's getting $1.3 million this year for a guy who totaled 12 goals and 15 assists last year, with only 20 penalty minutes. That being said, he did score 19 the year before. And I remember hating the acquisition of Michael Ryder last year, so hopefully I'm wrong about this deal as well.

Source:
Boston Herald
Posted by rob at 12:30 PM No comments:

ANOTHER BRUIN BITES THE DUST 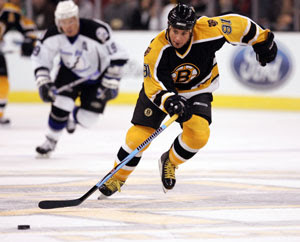 Just a few days after trading Chuck Kobasew, and placing Milan Lucic on long-term injured reserve, the Bruins lost another key forward in Marc Savard. The team announced today that the playmaking center has a broken left foot, and will miss 4 to 6 weeks. Savard scored twice in Friday's 3-0 win over Dallas.

On the bright side, it's better to endure these injuries in October than in April or May. In last year's playoffs, injuries to key players helped contribute to Carolina's 7 game series win in the Eastern Conference Semifinals.

Source:
Associated Press
Posted by rob at 10:58 AM No comments: