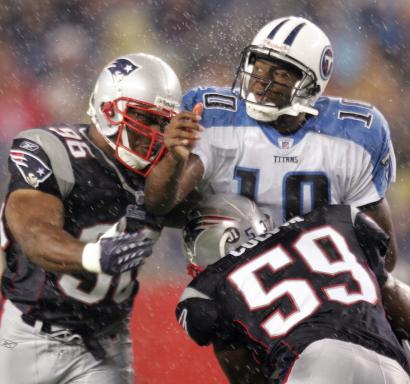 Colvin signed with the Patriots in 2003, and great things were expected of him. He was even the highest paid player on the team in terms of his cap number. It took him some time, but eventually he emerged as the player we expected him to be.

In 2006, he led the team in sacks with 8.5. And last year, he became a real playmaker. He only had 4 sacks, but he intercepted a ball, and forced three fumbles. Combined with fellow OLBs Mike Vrabel and Adalius Thomas, he was part of a solid trio.

Injury cut his season short, and it hurt the Pats. With him in the Super Bowl, the game may have been different. Had it been Rosevelt instead of Pierre Woods, who fell on that fumbled hand-off, perhaps he would have been able to hold onto the ball.

For the record, I'm not coming up with an excuse, I'm just trying to point out how valuable Colvin is.

But his cap number was way too high. Colvin would have counted for about $7.6 million in 2008, which is about 6.6% of the total cap (estimated to be at $116M for 2008). Considering the Patriots already have Vrabel and Adalius, Colvin was sacrificed in order to appease the salary cap gods.

This isn't good news for the Patriots, but it does have a silver lining. The Pats have more room to acquire new talent, and/or retain guys like Moss.

Also on the linebacker front, the Cowboys signed Zach Thomas to a $3M incentive laden deal.

The Pats also released Oscar Lua, who was drafted in the 7th round last year, then placed on injured reserve, and now he's gone.

Somebody call Greg Easterbrook. Wake up the three employees of the Anderson Herald-Bulletin in Indiana. Get a hold of Arlen Specter. Send out e-mails to all the Patriot Haters out there. New England Patriot runningback Kevin Faulk got caught breaking a law!

Faulk was cited for misdemeanor marijuana possession in Louisiana last Friday. He was at a Lil Wayne show, and was routinely searched by a sheriff's deputy on his way to a luxury box. The deputy discovered four blunts on his person. He was not arrested or detained, as the amount was deemed to be for "personal use"

This is the second time since the Super Bowl that a Patriot has been accused of possession. Defensive back Willie Andrews just plead not-guilty to possession in Lawrence a few days ago. I can just hear the Congressional accusations and investigations of a drug ring centered in Foxborough.

I'm not gonna criticize Faulk for smoking weed. I don't smoke weed, but I don't care who does or doesn't. It's not chemically addictive, nor is it dangerous. Drinking (which I do) and smoking cigarettes (which I also do) are much more harmful, in my opinion. And pot sure as hell doesn't give an athlete a competitive advantage.

But I am gonna criticize Faulk for getting caught. That's just stupid. Couldn't you give the blunts to one of your friends to hold? Or maybe split them up, instead of holding all four? Then once you see the deputies doing pat downs, don't you know to give up? When was the last time a cop in Louisiana didn't do an aggressively thorough pat down of a black man?

Chalk this one up to stupidity, which marijuana is known to contribute to. The NFL will probably come up with some sort of punishment or warning once this case rattles through the justice system.

Source:
Associated Press
Posted by rob at 1:30 AM No comments:

The Patriots did not franchise Moss. Many speculated that this non-action would lead to a long-term deal with the receiver. It has not, at least not yet.

The rumor has Moss and the Cowboys talking about a possible deal. There's also another rumor that Moss agreed to let the Patriots match any offer he received from another team.

The fate of Randy Moss will be the most dramatic saga in Patriots history since Bob Kraft threatened a move to Hartford. There will be reports, rumors, speculations, stipulations, heresay, conjecture, and people making things up.

But I feel as though Moss likes it here, but can't resist snooping around to see what else is out there. It's got to be a contending team, with a good QB (this eliminates Dallas), and enough cap room for Moss to get a big deal.

The Patriots did not exercise their option on Stallworth. But that doesn't mean he won't be back. The team will try to work out a new deal with Donte. But Donte may want to test the waters of free agency. He won't get a big contract, but he may want to be a team's #1 or #2 receiver. In New England, he has become #3 behind Moss and Welker.

Wes Welker is thankfully here to stay. His 112 receptions, and 1,175 yards were a huge part of the Patriots going 16-0 in the regular season. Had the Giants not won the Super Bowl, Welker would have been my first choice for MVP of the game.

Jabar Gafney emerged in the 2006 post-season, and endured a year behind Moss, Stallworth, and Welker. He still contributed when called upon, catching 36 passes for 449 yards. He might want to go to a team that will have him higher on their depth charts. And you just know that some team will offer him a bloated contract thinking if he's paired with a mediocre QB he'll have the same kind of performance.

If Stallworth goes, I think Gafney's return is a sure bet. If Stallworth stays, Gafney might allowed to leave. But as far as #4 WRs go, Gaffney's probably the best in the NFL.

The Patriots recently passed on an option to keep Kelley Washington. His situation is similar to Stallworth's. A pickup would result in big bonus money and a big cap hit. The Pats have expressed an interest in reworking Washington's deal.

Washington didn't catch a pass, or have any offensive touches whatsoever. But he did contribute on special teams. He had 16 total tackles, a forced fumble, and a blocked punt. He was a big reason why Patriot opponents rarely had good field position after kickoffs.

Kelley may want to find a team that allows him to play more on offense. Then again, he seemed to relish his role on special teams. If certain players ahead of him leave (Moss, Stallworth, Gaffney), he becomes a much more integral part of the offense.

Former 2nd round pick Chad Jackson also didn't see an offensive snap in 2007. His injury woes kept him sidelined completely until November 8th. He still only saw limited time as the 6th receiver on the depth chart. He returned a few kicks, as well as a few punts.

We've yet to truly see what Jackson can do. When the Pats drafted him, he was an exciting prospect. The Pats traded up to draft him 36th overall in 2006. But a hamstring injury, followed by an ACL tear kept us from seeing as much as we wanted to see. Like Washington, Jackson moves up and fills in if other WRs leave.

Troy Brown has seen his last days in red, white, and blue. He's an unrestricted free agent, and will be 37 years old when the season starts. But he gave the Patriots 14 years of service. He's one of the few players to play in Super Bowls XXXI, XXXVI, XXXVIII, and XXXIX.

One possibility that might strike some as bizarre is Chad Johnson. Yes, Ocho Cinco himself. He's not happy in Cincinnati (who would be?). Belichick always talks about Johnson with as much of a smile as the Coach can muster. And we've seen "characters" come to New England and all of a sudden become monotoned, polished, and professional (See: Rodney Harisson, Corey Dillon, Randy Moss).

If I were a betting man, I'd set the odds of Johnson becoming a Patriot at 100 to 1. With the depth the team already has at the position, adding CJ would be slightly gratuitous. Plus the team would lose cap room to rebuild the defense. Plus he would be costly to trade for. Plus you'd have three different guys who are all used to being #1 receivers on the field at once.

But you never know what's going to happen. If Moss and Stallworth leave, the odds will change.

Here's what I think the Patriots depth chart at WR will look like for the 2008 season:

After that, who knows.

Now here's the "If there were no salary cap and the Pats could afford to load up at one position" dream depth chart:

Impossible, but it's fun to dream.

Sources:
Pro-Football-Reference.com
ESPN.com
The Dallas Morning News
Posted by rob at 1:00 AM No comments: