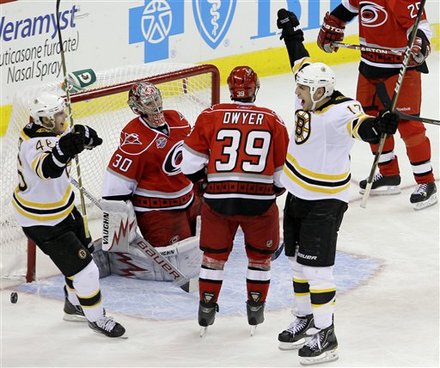 This was a grinding game. The Hurricanes played physically, and the Bruins answered. Especially Tim Thomas. If Crosby weren't having such an obscenely good season, Thomas would be my pick for the Hart Trophy (MVP). He made a season high 43 saves in this game. 37 of those came in the 1st and 2nd periods.

The two goals Thomas did allow came after Wheeler failed to clear the puck on a penalty kill, and after some "physical play" (interference) allowed Carolina to retrieve an airborne puck after a strange bounce.

The Recchi-Bergeron-Marchand line has become a dynamic offensive weapon. Not only has Bergeron been red hot, but Marchand scored his 10th, and I think he'll surpass 20 this season. He's a true player. He plays physical, he puts himself in the right place, and he's fundamentally sound. With he and Bergeron finishing well, Recchi's playmaking ability has been allowed to shine. Recchi won the faceoff (after Bergeron was chased) that led to Marchand's goal. And Recchi made a deceptive drive with the puck that set up Lucic's goal.

By the way, that was Lucic's 17th goal of the season, tying his previous career high. He scored it as he's scored most of his goals this year, by putting himself in the right place at the right time. He's a much smarter player than he was as a rookie, and he's applying that newly developed awareness, which is resulting in goals.

It's amazing that the Bruins are playing so well while Horton, Savard, and Krejci are in the middle of cold streaks. It's a testament to the play of Tim Thomas, the defense, and guys like Bergeron and Marchand. By the way, is anyone aching for Andrew Ference to return from his upper body injury? I'm not. The 6 defensemen the Bruins played last night suit me just fine.

The Sabres come to town Thursday night, and it's a good chance to continue this hot streak.