The OTHER March Madness kicks off tonight and continues all weekend. Hockey East could send anywhere from 2 to perhaps 4 or 5 teams to the NCAA tournament. Regular season champs BC and runners up UNH are all but assured a spot in the 16 team NCAA field, while upstart Merrimack will likely join them. BU has an outside chance, and Maine are the long shots. Those bubble teams can make a difference in this tournament, and of course winning the tournament earns an automatic bid.

Here are the first round pairings. They'll play a best of 3 series at the superior seed's home rink. The winners will be re-seeded for the semifinals next weekend at The Garden in Boston. BC wins trophies. Since 2007, they've won 2 National Championships, 3 Hockey East Tournament Championships, and 3 Beanpots. But this was the first time since 2005 that they've won the Hockey East regular season title. BC beat UMass three times this year, and are on a completely different level. They score 3.9 goals per game, and kill 87.6% of their penalties. BC should sweep this in 2.

#2 UNH WILDCATS vs. #8 VERMONT CATAMOUNTS
UNH lost the regular season title to BC in the final weekend, and have a reputation for choking in March. Fortunately for them, Vermont is not a very good team. The Catamounts won 8 games all season. UNH beat them twice and tied them once. UNH sohuld handle them in 2 games.

#3 BOSTON UNIVERSITY TERRIERS vs. #6 NORTHEASTERN HUSKIES
BU needs to go deep in this tournament to make the NCAA field. To do that, they have to get past old rival Northeastern. These teams split a home-and-home last weekend, and all three of their games were determined by 1 goal margins. NU started the season poorly (1-7-3), but gradually turned things around. Northeastern struggled down the stretch, though they held their own against BC and UNH. Northeastern wins in 3 very close games.

#4 MERRIMACK WARRIORS vs. #5 MAINE BLACK BEARS
At the moment, Merrimack would be in the NCAA tournament. But they can cement a spot by winning this series. They beat BC twice early in the season, they beat UNH twice in February. They also lost two blowout games to Maine. They're excellent at home (12-2-1), and mediocre on the road (10-6-3). Thankfully for them, this series will be in Andover. Merrimack will sweep this in 2. 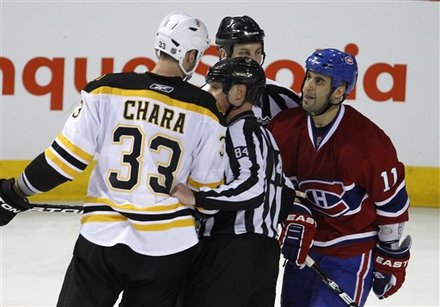 I was a bit surprised to hear that the NHL wouldn't discipline Zdeno Chara for his hit on Max Pacioretty. No fine. No suspension. I thought Chara would at least get 2 games. After all, Pacioretty's got a severe concussion, a cracked vertebrae, and the NHL has been harshly punishing hits to the head all season.

As I thought more about it, I realized that a 1 or 2 game suspension was impossible. If you think Chara's intention was to drive Pacioretty's skull into that stanchion, then he deserves a 15+ game suspension, at least. To do that intentionally is beyond dirty. It's criminal.

If you think Chara's intent was to hit Pacioretty, but not necessarily into the stanchion, then he deserves no further discipline whatsoever. How could the NHL suspend a player for an interference hit that unfortunately was at the worst possible time and location? There's no degrees or gray area on this hit. It's either very dirty, or just interference.

PJ Stock (who was born in Montreal, played for the Bruins, and now works for CBC as well as a Montreal radio station) made a few excellent points on WEEI. One of them was that if Chara wanted to injure someone, he could do it at any time. You can listen to the whole interview here:

Watch this at WEEI

Chara obviously wanted to hit Pacioretty. He wanted to hurt him, not injure him. Just like every hockey player wants to hurt their opponent when they hit him. The hit was late, in that the puck was already gone, but Chara starts pushing Pacioretty while they're away from that corner. It's the width of 3 Bruins players away when Chara initiates the contact. If Chara's intent was to drive Pacioretty into that corner, he has perfect timing.

But why wasn't Chara suspended in the midst of the NHL's crusade against hits to the head? Because this one was different. Blindside hits to the head in open ice and against the boards were plaguing the NHL, like an epidemic. They were too common. Whereas this was a freak, one in a million type thing.

The reaction from Montreal is pathetic. To be fair, had Subban or Gill done that to Marchand, there'd be plenty of pissed off morons wearing black and gold down here in Boston. But Quebecois are very passionate about their team, and they're very whiny and very French.

The Montreal Police had to publicly appeal to people to stop calling them to file complaints against Chara.

And some Habs fans are claiming the NHL has an anti-Canadian, pro-American agenda. Even though Chara is Slovakian and Pacioretty is from Connecticut. If it'd been a Maple Leaf who'd hit Pacioretty, the Habs fans would bitch about pro-anglophone, anti-francophone bias.

While Montrealers prepare to boo the Star Spangled Banner the next time a US team plays up there, I think we should evaluate this incident, and try to make rinks safer, if possible. One potential solution is to have the benches on opposite sides of the ice. Many college rinks are like that. That'd eliminate the need for a barrier at the center-line. And while there'd still be four dangerous stanchions (as many as there are now), they'd all be near the blue-lines, where checking is rare, and typically at much lower speeds.

Or maybe they could angle the glass at the end of the benches to a more forgiving 45 degrees, instead of 90. They need to at least look into this specific part of the rink and investigate ways to making it safer.