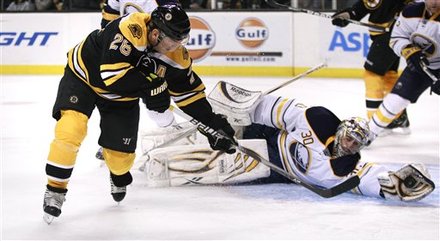 Ryan Miller reminded us that he's still the holder of the Vezina Trophy. He stopped the Bruins a season high 38 times. Some of the saves were spectacular. One of them was very very timely. His point blank stop of Mark Recchi's shorthanded bid was the turning point of this game.

So give a tip of the cap to Ryan Miller. However, the Bruins hardly looked comfortable in this high-paced, occasionally frantic game. They gave pucks away because they weren't fully aware of their surroundings. Vanek's breakaway came when Krejci and Kampfer got a bit too aggressive in a breakaway.

The Bruins aren't built or coached to be a North-South, high octane, up and down the ice team. They're built to be methodical, orderly and deliberate. When they get involved in these kinds of games, they lose pucks too easily, they fail to generate enough scoring chances, and they frequently lose.

I think Julien should let this team get more experience, and therefore more comfort playing a more fluid and faster paced game. I can just imagine in practices, that all the drills are orderly, all the matchups are organized, all the playing standardized and regular. Julien seems like the kind of guy who's eaten the same breakfast everyday for 23 years.

In the playoffs, the Bruins will meet teams that have good goaltenders, and can play this faster game. If they can't learn how to play it themselves (it'd be especially nice for the Power Play to get move quicker), the B's need to at least learn how to stop it, and how to slow the game's pace down. Playing more physically is a good place to start doing that.

Bruins at Colorado on Saturday afternoon. The Aves have scored the 4th most goals in the NHL, but allowed the 4th most. So with the Bruins' tremendous defense/goaltending, and inconsistent offense, it'll be strength vs. strength and weakness vs. weakness.