It looks grand. That's the purpose of these kinds of presentations. There are green trees, and no traffic whatsoever around the arena. It does look nice, though. And even with layers of snow (which tends to happen in Edmonton, Alberta), and bumper-to-bumper Dodge pickups in gridlock waiting to park, this building looks pretty sick. Outside and inside.
Posted by rob at 12:00 PM No comments:

Devils Even Series With Rangers 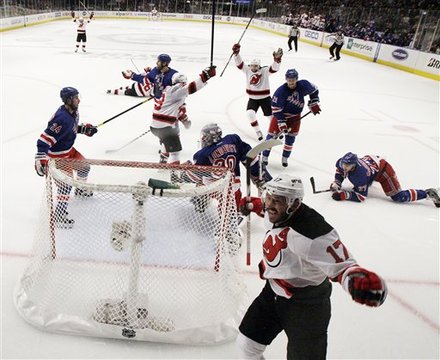 Martin Brodeur might be taking the same Geritol as Kevin Garnett and Paul Pierce. He looked very good last night, and has been excellent in the playoffs. He's just a savage between the pipes.

The Rangers scored twice thanks to traffic in front of Brodeur. But New Jersey was willing to play the same game, capitalizing on a deflection to score the game-winner. This contest is making me remember how important net-front presence is, how important the timing of that presence is, and how important Mark Recchi was to the 2011 Stanley Cup Champion Bruins.

The Rangers blocked fewer shots in this game, a sign that the Devils are more aware of when they should be driving pucks toward the net.

However, the Rangers once again scored a Power Play goal against the Devils. Kreider deflected a puck past Brodeur, and the Devils allowed their 14th PP goal of the playoffs. They only allowed 27 in the regular season. This series might be 1-1, but I do think the Rangers have the key advantages.

Photo Credit:
AP Photo
Posted by rob at 11:30 AM No comments: 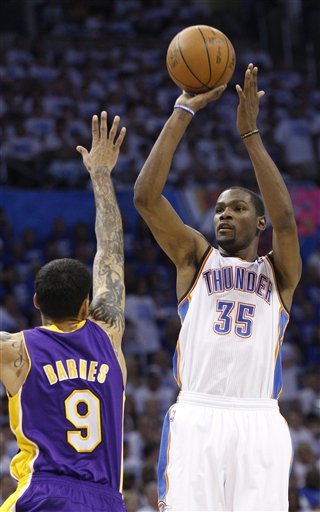 Is anyone outside of Hollywood rooting for the Lakers? Not only is Kobe a scumbag, but Ron Artest is a violent sociopath. The Thunder remained undefeated in the playoffs with a 77-75 win over the Lakers. Kobe Bryant didn't get the last shot. Then again, he wasn't open. Then again, Steve Blake shouldn't be taking the most important shot of the game. Then again, players like Kobe Bryant should make themselves available, so the Steven Blakes of the world don't have to take such a shot.

But Kobe is a scumbag, so he'll blame his teammates. He'll have rough sex with some woman in Oklahoma. He won't care if she consents or not. Then he'll move on.

Game 3 will be played Friday night in LA.

The employees and bars in and around the Staples Center must be cleaning up this Spring with the Lakers, Kings, and Clippers all deep into the playoffs. 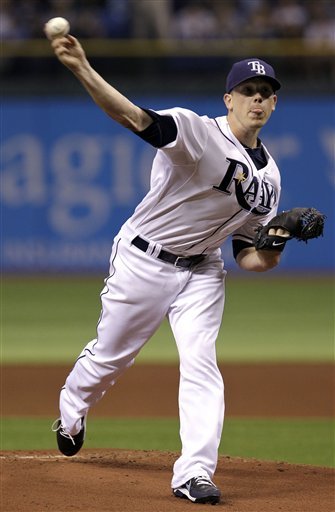 There's no shame in being shut down by Jeremy Hellickson. So I'm not too disappointed by this game. In fact, there is one strong positive to take from this: Buchholz doesn't suck anymore. He's gone from horrible to not-so-bad. He had to be pulled in the 6th, after only 87 pitches, but he's not stinking up the joint like he was back in April.

One thing that isn't good is that the Red Sox lead the world in balks. Three more balks last night. There have been 45 balks in all of Major League Baseball this season. The Red Sox have 6 of them.

Balks are a bit freakish. But what irritates me is how much attention Sox pitchers give to baserunners. It just isn't worth it. Bard has struggled with this, and so has Buchholz. I miss the days when Joe Kerrigan was the pitching coach and the Sox didn't give a rat's ass about what baserunners did. Who cares if a runner steals second so long as the batter grounds out to third or flies out to left?

Sox' pitchers need to stop worrying about baserunners and focus on hitters.

Good job by the Rays for selling 20,843 seats. They have a first place team, hosting a divisional rival that happens to be one of the most storied in the game. And they barely fill half their park. Yes, baseball definitely belongs in the Tampa Bay area. Just like hockey belongs in Arizona.

Will Rhymes was carted off after being hit by a pitch on the wrist. He passed out due to an adrenaline rush. Jonathan Vilma blocked me on Twitter after I told him he owed Scott Atchison $10,000 for the cart off.

So the Sox' streak is over. But as I said in the first paragraph, there is no shame in being shut down by Jeremy Hellickson.

Photo Credit:
AP Photo
Posted by rob at 10:30 AM No comments: 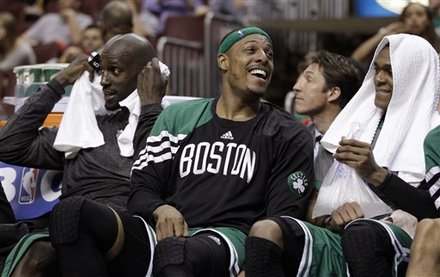 I thought the Celtics would win, but it would be close and low-scoring. As long as I got the first one right, I'm happy.

Paul Pierce isn't injured. He might be experiencing some pain, some wear and tear. But he's not injured. He scored 24 points, he drove to the hole all night (14 free throws) and hauled in 12 rebounds.

All the Celtics played more aggressively. It seemed like they didn't want to wait for the 4th quarter to win. They wanted to win in the 2nd and 3rd. And they did. Convincingly so.

Rondo was amazing. He took his shots, scoring 23. And he had 14 assists.

Garnett also had a big night. 13 rebounds and 27 points.

All the Celtics were physical. They ran all over the 76ers. They sped the game up. Before this series, the experts didn't think the Celtics could play a full court game against the 76ers and be successful. The C's proved that wrong last night.

The Celtics have Rondo. And Rondo can run all day. And by speeding up the pace of the game, the Celtics put the pressure on the 76ers to execute on every possession. You could almost hear the Celtics collectively saying "Try to keep up with us." The 76ers started making mistakes, turning the ball over, missing shots. It wasn't rampant, but it was enough to give the C's chances to add to their lead, and also add to the pressure.

The Celtics sprinted in the first three quarters, then walked through the 4th. But by then, they had a big enough lead that they didn't need to run anymore. So essentially, it was a 3 quarter game. The Celtics can run for 3 quarters. And after running, they're better at executing than the 76ers.

There are simply too many weapons on this team to lose a series to Philadelphia. The 76ers aren't equipped to stop Pierce, Garnett, and Rondo every night. Now Pierce has started his engine, KG is rolling, and Rondo is red hot. Which is more likely, that two of these guys are shut down, or that Lavoy Allen will score 10 and get 8 rebounds off the bench?