We've seen more than a fair share of upsets in this tournament. We've also seen a great deal of tying. If these trends continue, the knockout stage should be most entertaining and random.

An overactive Joe West kind of ref put his mark on this game by issuing 9 cards, including a red to Germany star Miroslav Klose. That being said, Lukas Podolski missed numerous chances to score, including a softly taken penalty shot. Germany is one of many favorites who will be up against it in their 3rd match.

USA 2, Slovenia 2
Give credit to FIFA for quickly knocking out referee Koman Coulibaly for his still unexplained disallowance of an American goal in the 85th minute. The NBA could learn something there. The US was robbed of a win, but also shouldn't have found themselves down 2-0 to Slovenia at halftime. With all the tying in Group C, the 3rd pair of matches will be most intriguing.

Algeria 0, England 0
The English cannot score. Algeria is one of many underdogs to frustrate a favorite with excellently executed defensive play. Results like this demonstrate that the World Cup will go to a the side most capable of adapting to various tactics employed against them. 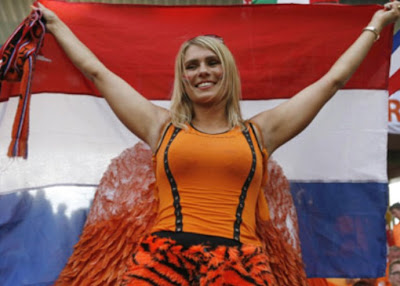 The Netherlands might be that adaptable team. This win wasn't pretty, but compared to what's been happening to the other Top 8 (7-5-2 combined record so far, that's Wins-Draws-Losses) teams, the Dutch will take it, and also be one of the first teams to clinch a spot in the Round of 16.

Australia 1, Ghana 1
Ghana's been a disappointment, as have most African teams, playing on their continent for the first time in World Cup history.

Cameroon are perhaps the biggest of all the African disappointments. They were the first team eliminated from the 2010 World Cup with this 2-1 loss to the Danes. Denmark and Japan will vie for the second advancement from Group E.

Paraguay 2, Slovakia 0
It's been a bad tourney for Africa, but good for South America. That continent is undefeated at 7-2-0.

New Zealand 1, Italy 1
This was the biggest result in the history of the All Whites. New Zealand are ranked 78th by FIFA, just below Wales, and only two spots above Iraq. Yet they deservedly drew with the 2006 World Cup winners. It's true their goal was offside, but it's also true that Italy won a soft penalty. These two teams are now tied with 2 points in Group F. Brazil haven't clinched advancement, but they're as close as you can get. If North Korea doesn't win today, Brazil are in the Round of 16.

The 2nd round of Group matches complete today, then it's time for some pivotal 3rd matches.

Who do we have to thank for this turnabout? Clay Buchholz for one. Last night he gutted through his 10th win of the season, struggling early, but working through it, settling down, and getting the ball to Bard-Papelbon.

There's been the steady offensive performance of Marco Scutaro, filling in for Ellsbury atop the Sox lineup. There's been the surprising contributions of Daniel Nava, who's 10 for 27 since being called up.

In short, everything's going right for the Sox. In those first 40 games, they found ways to lose. Now they're finding ways to win.

But as I said, the Sox started 19-20, and are 24-8 since then. Reality lies somewhere in between. The Sox are not a below .500 team. Nor are they a .750 team. I'll be the wet blanket and try to temper some exuberance. The Sox have had a juicy schedule to feast on the last few weeks.

Not only do the Diamondbacks suck, they were cold when they came to Fenway. They'd lost 16 of 20. The Dodgers are your token NL "contender." And the Phillies are in the midst of an 11-19 stretch.

So while the Red Sox have gotten hot and soared up the standings again, let's not lose our minds here. Daniel Nava is not going to finish the season with a .370 average.

Then again, it's still enjoyable to watch the overrated Rays (I'll admit to overrating them myself) fall to Earth. But this season looks like it will be a turbulent roller coaster ride, and not for the faint of heart. And whoever's on their way up come October will get the jewelry.

Photo Credit:
Reuters
Posted by rob at 10:00 AM No comments: