NHL DOESN'T TAKE A BITE OUT OF BURROWS 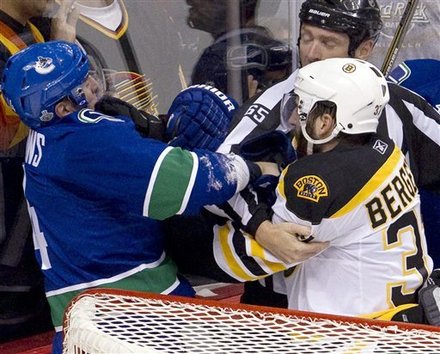 The NHL decided not to suspend Alexandre Burrows for biting Patrice Bergeron's finger. The NHL explained, stating that there was insufficient evidence to prove that Burrows intentionally bit Bergeron.

I have to shake my head because how does one unintentionally bite another person? I've had people stick their hand in my face, right at my mouth, and my first instinct isn't to chomp down. Quite the opposite. I rarely want someone else's finger in my mouth and never want to bite it. Biting is a voluntary, intentional act.

Burrows has a reputation for dirty play. And even though it is the Finals, this incident was simply too bizarre to go unpunished. This wasn't a gray area hit, or some pushing and shoving that possibly went over the line. There's little room for subjectivity here. The guy used his teeth. Dogs get put to sleep for biting humans. Burrows gets to play in Game 2.

I'm tempted to start a Montreal-type campaign to call up Vancouver's Animal Control (or whatever they call it up there) and report a wild animal that's been biting people's fingers. But then I'd feel bad for the Animal Control people inundated by phone calls just because Burrows got away with biting. Then again, they'd probably be Canucks fans who think that Luongo is better than Thomas and who like hearing the Star Spangled Banner sung in under 60 seconds.

Game 2 tomorrow night. It should be interesting to see how Burrows behaves, and how the Bruins react to any mischief.