Disclaimer: This is an advertisement.

Golf is the only sport that the participant has their own personal golf ball. Think about it. Imagine if baseball allowed pitchers to bring their own ball to the park, or football allowed quarterbacks to bring their own pigskin. Think about how much an advantage it could be to bring a certain kind of ball. A fastball pitcher could bring a sleek, aerodynamic ball that sliced through the air. A finesse pitcher would bring an oddly shaped ball that darted around on its way to the plate.

Baseball doesn't allow you to bring your own type of ball. But golf does allow you to do that. So it makes sense to be selective about the type of ball you use. Why not take advantage of your ability to decide what to bring?

Let's say the strongest aspect of your game is driving. Then get yourself some distance golf balls that will soar through the air and get you to the green in a stroke. Or if driving is your weakness, acquiring distance golf balls can help cover your faults.

Golf is a unique game and there are unique ways to gain crucial advantages. It's a smart game that requires good decisions. And those decisions start before you get to the course, when your'e deciding what equipment to bring with you.

Inside Fenway Park: An Icon at 100 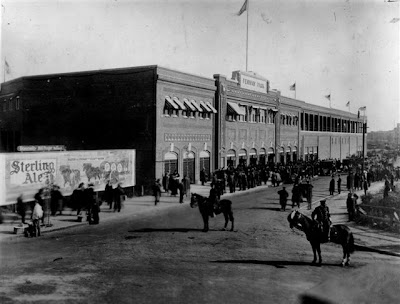 2012 marks the 100th anniversary of Fenway Park, in case you haven't already heard. PBS will be airing a National Geographic documentary tonight at 10 (and tomorrow night at 9, and several other times during the week) about Fenway.

I'm told the documentary will tell the history of the ballpark and also show some of the behind-the-scenes operational aspects of the facility. I've worked in sporting venues for a few years now and I'm still impressed with how many people do so many things to make an event happen.

Matt Damon narrates the film. Which is a welcome change from the Denis Leary "I'm the angry Bostonian who smokes a lot" narrated Boston sports material. And Mike Barnacle will be appearing too. Unfortunately, PBS thinks Barnacle is the voice of the Boston sports fan. He was featured prominently in Ken Burns' "Tenth Inning."

That aside, I am DVRing this documentary and am eager to watch it. Fenway's 100th anniversary on April 20th is one of the few things to look forward to this season for the Sox.
Posted by rob at 3:00 PM 2 comments: 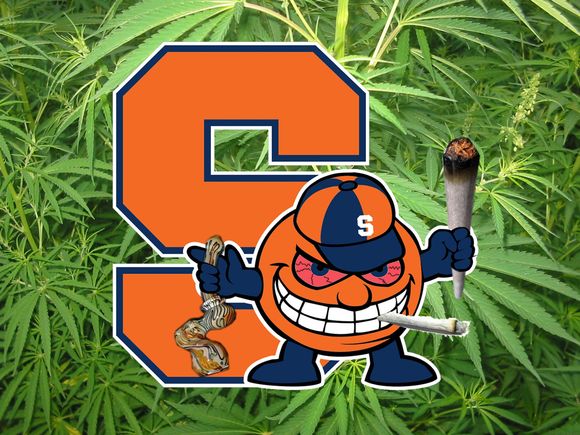 Not since the 2004 Democratic National Convention have I been happier to see a rabble of out-of-towners depart the City of Boston. I am so happy that Syracuse and their fans have been sent packing, both out of Boston and out of the NCAA Tournament.

I haven't liked Syracuse for nearly a decade now. I went to school in Central NY State, embedded among annoying SU fans that thought their 22-10 basketball team was great, and their 4-8 football team would compete for a BCS bowl. And the same Syracuse fans who cursed Boston College for jumping to the ACC now gloat about joining the ACC, and leaving the likes of Georgetown and UConn to fend for themselves.

What's worse is that these delusional orange-bleeding morons wind up working for ESPN. They used to just overrate The Orange in their coverage of the team. Now they cover up the skeletons in Syracuse's closet.

So yes, I'm thrilled that Boston is rid of the Syracuse program and it's clingers-on. I'm giddy that SU is out of the tournament. Jim Boeheim runs a dirty program that doesn't report drug violations. What a great guy to be a mentor to young men as they prepare to enter the real world. And in his spare time, he insults victims of sexual abuse. Yet he remains uncriticized and untouched by the Cuse grads that run ESPN and the rest of the sports media.

BC, Minnesota, Union, and Ferris State Advance to Frozen Four

Boston College advanced to the Frozen Four after back-to-back shutouts of Air Force and Minnesota-Duluth. The Eagles have won 17 straight. They've only allowed 1 goal in 3 games, 7 goals in their last 10 games, and only 16 goals in their last 16 games. Parker Milner has turned into a wall of a goaltender. BC has made the Frozen Four 15 of the last 17 years. This is just another great year for a great program under a great coach, Jerry York. They'll face Minnesota in the semifinals.

Minnesota got to the Frozen Four with convincing wins over BU and North Dakota. The Golden Gophers won the WCHA regular season title, and have strikingly similar numbers as BC. Both teams score about 3.5 goals per game, and allow under 2.3 goals per game.

Union (located in Schenectady, NY, just outside of Albany) won the ECAC. The ECAC wasn't rated too highly, but here's Union in the Frozen Four, and fellow ECAC member Cornell knocked Michigan out. Union's strength is their goaltending in defense.

With the Frozen Four in Tampa, all of these teams will have to face the same travel strains. All four teams are from different conferences and no matter who wins the semifinals the Championship game will be between an historic powerhouse and a first time finalist.

The Frozen Four will start a week from Thursday. The Championship will be on Saturday April 7th.
Posted by rob at 1:00 PM No comments:

That headline might be a little sensationalist, but since Bobby V takes credit for everything else in the world, and the Red Sox' Front Office think managers are responsible for their player's behavior, why not give credit to Mr. Valentine for Mr. Jenks' shenanigans?

One of Theo Epstein's biggest and fattest mistakes was arrested by the Lee County Sheriff's Office after being pulled over for driving erratically early Friday morning. He failed a field sobriety test. He told officers he had taken too many muscle relaxers.

Jenks, a married father of 4, had spent the night at Babe's, a strip club in Fort Myers. For some reason news reports are calling Babe's a "nightclub." Boston.com referred to Babe's as a bar, then later mentioned that they "feature exotic dancers," as if the strippers were just an appetizer special featured at the bar between 6 and 8.

Babe's is a strip club. Let's call an apple an apple.

Jenks has posted bail. He admitted to police on the scene that he'd hit a car in the Babe's parking lot. Even if he didn't drink or wasn't drunk, he admitted to taking too many muscle relaxers then driving. So he's fucked. Maybe, just maybe, the Sox can get out of paying him the $6 million he's owed. He's being charged with 5 misdemeanors, 4 of them DUI related, 1 of them stemming from hitting another vehicle then driving away.

It seems like the more money Theo Epstein spent on an acquisition, the less success they had. Renteria, Drew, Lugo, Jenks, Matsuzaka. The thing about Theo is that he's too clever and maybe Cherington has the same tragic flaw. They use numerology and neo-Moneyball thinking to find undervalued guys like Bill Mueller and David Ortiz. Which is a great way to get good players for less money. But the big ticket free agents aren't hidden gems that need to be discovered. They're the obvious sluggers who hit 40 HRs, the pitchers who have 3 (and only 3) great pitches.

Theo tried to use the same cleverness that acquired David Ortiz for $1.25 million in 2004 to spend multi-millions on big acquisitions. That's like a stock broker analyzing Exxon-Mobil stocks the same way they look at Kevin's Gas & Auto Repair Station. It's just not the same. Theo finally seemed to get it when he acquired Adrian Gonzalez, a blatantly talented slugger.

Back to Jenks, when Bobby Valentine was approached by Red Sox media about the DUI, the smug Mr. Valentine replied "You guys must know a lot more than I do. I got a little text."

How long until we get sick of that level of smarminess from Mr. Valentine?
Posted by rob at 12:00 PM 1 comment:

With the Patriots signing so many receivers, many people (myself included) thought that Chad Ochocinco would soon be cut by the Patriots. But no. He and the team have restructured his contract. Instead of being paid $3 million in 2012, he'll receive $1 million. Last year Ochocinco made $6 million, or $400,000 per catch (at that rate Welker would have made $48.8 million last year).

This move demonstrates that Ochocinco wants to remain a Patriot. Obviously. It means it will be less likely that he gets cut because of the salary cap. He might still get cut before the season, but it would be because of his performance on the field, not his paychecks.

This is what the WR position looks like at the moment:

Christopher Price on WEEI's "It Is What It Is" blog made a great point in this post about the restructuring. In 2012, the Patriots are treating WR like they treated the D-Line in 2011. They're acquiring a number of veterans who may or may not be productive. And hopefully one or two of them are.

Ochocinco does have a good chance to make the team. He'll have a full, not locked-out off-season to learn McDaniels' playbook. And while everyone is pointing out that the Patriots have 10 receivers on their roster, there's a significant dropoff in talent after the 6th name on that list. So don't be shocked to see Ochojohnson on this team in the fall.
Posted by rob at 11:00 AM No comments: 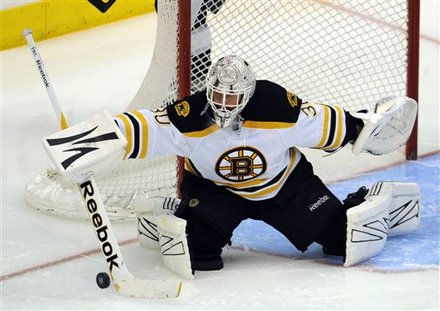 The last four Bruins' wins have been similar to the wins they recorded in that streak. Some were blowouts against clearly inferior teams (the 8-0 win against Toronto). Some were energy driven physical battles (the win over Philadelphia). Some were a little ugly (Anaheim). All featured outstanding goaltending.

It's nice to see that Turco can play. Last night he was sharp, decisive, and confident. Even after allowing a deflected goal, he never lost that confidence. And Tim Thomas was brilliant in LA. Maybe being around all those southern Cal liberals motivated him.

Brian Rolston hasn't just settled in as a Bruin, he's become a leader. He's riding a 6 game point streak, with 11 points in those games (3 goals, 8 assists). His goal last night was his biggest since he returned to Boston.

It was good to see Peverley back on the ice. He was clearly rusty, but that will fade. He is a key player that does so many different things for the team. His return should inject some fresh life to the lineup, and allow players to return to the roles they're more comfortable with.

I love how Jordan Caron plays the game. Paille was scratched last night which gave him an opportunity to dress. I like Caron better than Pouliot. Pouliot makes the occasional big play, like last night when had a goal and an assist, but Caron inflicts a physical game every shift. I'd rather see Caron on the 4th line, Paille on the 3rd line, and Pouliot scratched.

Speaking of scratches, the Bruins are 4-1 when Corvo doesn't dress.

Bruins host the Lightning Tuesday night. The Bruins now hold a 5 point lead over Ottawa with a game in hand. The Bruins also have 44 wins, which is the most Ottawa can finish the season with.