The writing was on the wall last night as rookie Brian Hoyer was under center the entire game. And as Hoyer impressed on the field, Walter simmered on the sideline. After the game he remarked: "I'm ready every week. As far as any other questions I think the guys who played should be the ones to answer the questions."

Then early this afternoon, the Patriots cut him loose. This probably indicates the future acquisition of a veteran QB to be backup Brady.

Without Virginia Tech, the ACC is a joke. A painfully unfunny joke told by some annoying shrill voiced female comedian about menstrual cramps. As a BCS conference, it's pretty sad, and helps demonstrate how unfair and lame the BCS system is. The winner of the ACC gets an automatic berth in a BCS bowl, but teams from the Mountain West need to go undefeated for such an honor. And if you're in the WAC, forget it.

1. VIRGINIA TECH HOKIES
Who in the ACC will stand up and stop the Hokies? VT was the only 10 win team in the conference last year, and also went 8-0 at home. They have an interesting non-conference schedule, with home games against Nebraska and Marshall, a trip to East Carolina, and a matchup with Alabama in the neutral Georgia Dome. Tech returns some formidable weapons on offense, like RB Darren Evans who rushed for 1,200+ yards last year. Their defense is good enough to stay above water in the ACC, and their special teams is always among the best in college football.

2. CLEMSON TIGERS
In another conference, Clemson would be a team in the middle of the pack, but in the ACC, they should win the Atlantic Division and make a good bowl. They return a decent number of playmakers on defense, which should throttle some of the lackluster offenses in the conference. They also have some nice running threats. Quarterback is a question that will remain unanswered throughout the season. There's also little to work with in the receiving corps. 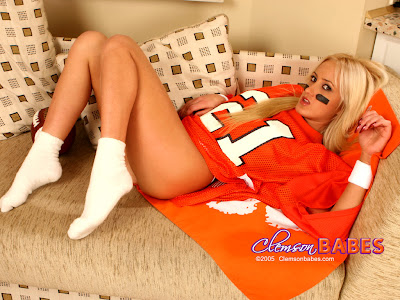 And the rest in alphabetical order...

BOSTON COLLEGE EAGLES
This isn't a rebuilding season for BC, it's a recovering season. New coach, no quarterback, Mark Herzlich being treated for cancer, and two mammoth holes on the D-Line left by draftees BJ Raji and Ron Brace. The Eagles surprised many last year, by finishing atop their division. In 2009, BC will surprise people if they attain bowl eligibility. But they might sneak in thanks to cupcakes like Northeastern and Kent State on the schedule. But they also have to play Clemson, Va-Tech, and Notre Dame... all on the road. 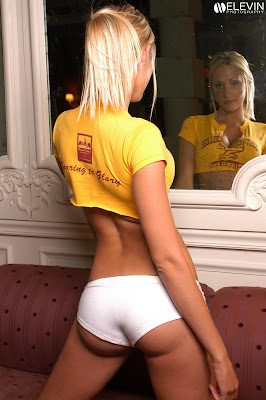 DUKE BLUE DEVILS
Duke finally won an ACC game last year, and this year might double that total. But that's about it. A weak offensive line, a young team all around, and only a few quality players means that even in the weak ACC, Duke is everyone's bitch.

FLORIDA STATE SEMINOLES
Proposition bet: which will be higher, FSU's win total, or suspension total? FSU has some good backs, but no receivers to catch passes from QB Christian Ponder. They have next to nothing to offer on defense, with freshman all over the backfield, and no pass rushing threats. It's a pad-stats defense.

But Jenn Sterger is still one of the hottest women ever. And I'll give the Noles credit for having balls in their scheduling. They travel to national champs Florida, play USF, and unlike most BCS teams, they're willing to play BYU in Provo. Unfortunately, all these games will be embarrassing losses, not sources of pride.

GEORGIA TECH YELLOW JACKETS
The spread-option offense is a double edged sword. Against unprepared and overly committing defenses, it's a gold mine. Against prepared and disciplined units, it is a non-starter, as was seen in the Peach Bowl against LSU. Tech has depth on offense, all over the place. They could contend for the Coastal Division title, as they host Virginia Tech. That game could prove to be the most important in the ACC season. If Tech can defend their house, they could go to the Orange Bowl.

MARYLAND TERRAPINS
Like most ACC teams, the Terps are good in one area, decent in another, and Godawful in another. They have plenty of backs, including David Meggett's son Davin, who should rush for 5,000 yards. Their defense isn't a strength, but it's not a liability. But they have few receivers to go to, and their offensive line will be easily pushed around.

MIAMI HURRICANES
The Canes are going to make a comeback this year. The offense is talented and deep, Jacory Harris is the clear #1 QB, and the defense won't be pushed around. Miami never struggles to recruit big and speedy athletes, and they'll remind the entire ACC of that fact in 2009. They have a three week stretch in late September into October that will show us how serious they are.

NORTH CAROLINA TAR HEELS
UNC is supposed to be good this year, or that's what's being said. I'm sure they'll be solid and bowl eligible, but I have trouble taking them seriously. Their defensive line is big and mean. But they lost three receivers to the draft, including studs Hakeem Nicks and Brandon Tate. UNC might surprise me and contend for their Division's title and/or a Gator Bowl berth, but I think they should stick to basketball.

NC STATE WOLFPACK
The Wolfpack are one of those floating teams, always finishing 3rd in their division, going to the Champs Sports Bowl, fucking around, getting triple doubles. QB Russel Wilson is solid, there's depth at wide receiver, but questionable depth at RB. The defense returns a good number of starters. NC State always bores me. I used to always think they'd break through, but like most ACC teams, they're stuck in mid-level obscurity. And no team should be allowed to schedule games against Gardner-Webb and Murray State in back to back weeks. 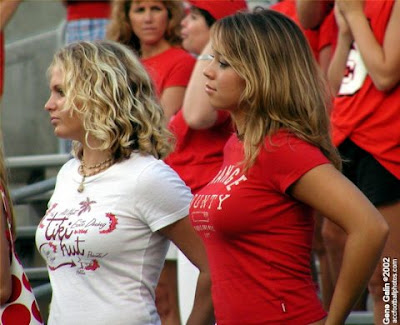 VIRGINIA CAVELIERS
UVA is one of the most comically run teams in college football. They have a 3-4 defense, which is great for the NFL, but not the NCAA. Vic Hall, who started 11 games at cornerback last year, will compete for the QB spot in '09. There's all sorts of funny suspensions, and a foolish hurry-up offense. Virginia is one series of gimmicks after another, without actually analyzing their own strengths and weaknesses, and applying philosophies that gel with those strengths. WAKE FOREST DEMON DEACONS
Wake epitomizes the ACC. So mediocre, not going anywhere, token 8 wins thanks to soft opponents like Duke, and retched non-conference scheduling. Riley Skinner comes back for year #3. The superaccurate Skinner can throw for a 70% completion rate, and only had 7 picks last year. 4 of those came in one bad game against Navy, which he atoned for in a rematch in the EagleBank Bowl. He was 11 for 11 in that contest. WFU has good RBs and an O-Line that returns most of its players.

But like every other team in the ACC, every strength is balanced by a massive weakness. Wake only returns 4 defensive starters, and will be pummeled unless Skinner and the offense can hold onto the ball. 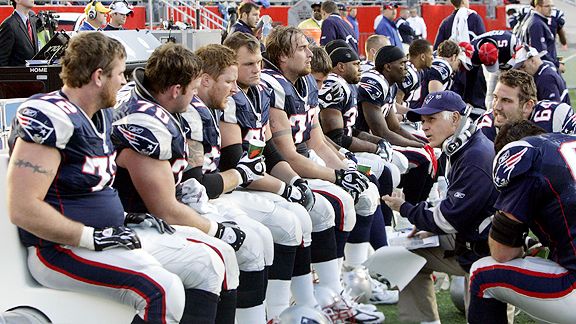 The offensive line allowed 48 sacks last season, after only allowing 21 in 2007. Part of that was due to a change in quarterbacks, but part of it was a slight deterioration of talent in the O-Line, which we saw beginning in Super Bowl XLII against the Giants.

The Patriots returned all 5 starters to their line. And that's almost always good news, as none of these guys have to get used to working with new colleagues. Matt Light is 31 years old, and isn't as fast as he used to be. And there is a bit less depth with the departure of Russ Hochstein. At the same time, German born Sebastian Vollmer looks like he could be the real deal. He's gotten a good amount of snaps in preseason, and the 6' 8", 315 pound Dusseldorfer looks like he could be the real deal.

The O-Line sent 3 Pro Bowlers to Hawaii in 2007. Do not expect that in '09. Their pass-protecting performance should be somewhere between 2007's stellar display, and 2008's more down-to-Earth play. They'll give the runningbacks some room, but won't cut huge holes for them to run through. Laurence Maroney will still struggle.

One thing that will help is the presence of Tom Brady and a very threatening offense. It takes a lot of balls for a D-coordinator to really attack the passer against the Patriots, knowing that Moss will be covered (open) man-to-man with Brady throwing the ball.

JULIEN TO BE B'S COACH FOR AWHILE 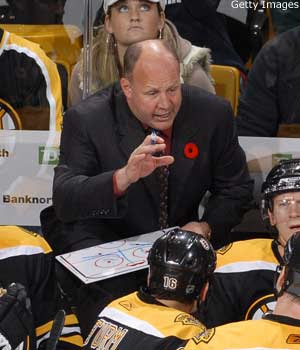 Claude Julien, who had 1 year left on his deal, and the Bruins agreed to a "multi-year extension." This should keep Julien behind the Bruin bench into the mid 2010s. Last year, he became only the 3rd Bruins head coach to win the Jack Adams Award for coach of the year.

He's won 94 games in 2 seasons as Bruins head coach, accumulated 210 points, and made the playoffs twice. He's helped develop young players like Milan Lucic, Phil Kessel, and David Krejci into true forces on the ice. He's also helped veteran players like Marco Sturm along. Everybody seems to get better when they become a Bruin, and Julien is a big part of that.

Sources:
Boston.com
Boston Herald
Posted by rob at 11:59 AM No comments:

Pedro Martinez outdueled Cy Young winner Tim Linecum for his 3rd win of the season. He went 7 innings, scattered 5 hits, allowed only 1 run, and struck out 9.

Photo Credit:
AP Photo/Matt Slocum
Posted by rob at 3:30 AM No comments:

SOX WIN THEIR FIRST SERIES IN TAMPA SINCE 2007

Remember when Clay Buchholz first threw to Victor Martinez, and a few Jason Varitek ball-washers moaned about V-Mart's lack of game-calling prowess. Buchholz has had 5 Quality Starts since then, so eat it, Varitek lovers.

Buchholz went 6 innings, followed by Wagner, Bard, then Papelbon. That's going to be the ideal gameplan down the stretch. There's a lot of heat in that trio.

The Rays are all but done. 6 out with only 29 games to go, and the Rangers to leapfrog over. It doesn't look good. They already gave up on Kazmire, and without 8 players having fluky career years, they just aren't that great.

The Sox travel to Chicago for a 4 game series against the floundering White Sox. Paul Byrd faced Freddy Garcia (is this 2001?) Friday night.