THOMAS' STAR SHINES ON IN CAROLINA 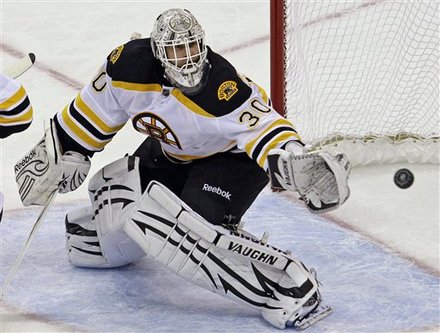 Two days after he got the Win in the All-Star Game, Tim Thomas won another game in Raleigh. While 2 goals allowed and 24 saves doesn't sound like a stellar night, Thomas once again was the biggest reason the Bruins won.

A few droughts ended, as Daniel Paille tipped in a Zdeno Chara slapshot, scoring his first goal since April 10th of 2010. He's found a suitable role on the 4th line. That line is more about possession, energy, and being a nuisance. With Marchand moving to the Bergeron line, Paille slots right in with Thornton and Campbell. Similar to those guys, he brings something to the table, namely speed, although he lacks the puck skills to do much with it. He's also an adept shorthanded player. He's this generation's PJ Axelsson.

Horton finally ended his goal drought with a nice backhander that beat Cam Ward up high. Hopefully, the confidence returns, and he starts playing less like Michael Ryder.

The Bruins were clearly the better team, but the last 6 minutes of the game did concern me. Once again, when opposing teams get desperate, the Bruins get sloppy. They're incapable of playing both fast and careful at the same time.

Against teams better than Carolina, that will be a problem. And in playoff games, those desperate minutes will come early in the 3rd period. I'm not sure if the B's are capable of withstanding that much pressure for that amount of time.