The other March Madness continues in Boston as four teams remain in the Hockey East tourney. Two have NCAA at-large bids locked up, a third probably does, and the fourth needs to play their way in by winning twice this weekend. The semifinals start today at 5, and the finals are tomorrow at 7 (and I believe will be broadcast on NESN tape delayed).

A rematch of the Beanpot final. NU has played BC well this year. BC needed overtime in that 7-6 Beanpot game. Then they met a few days later and tied 7-7. Then Northeastern beat them 2-1. But it's hard to pick against BC in what I call "Trophy Games" (Beanpot, Hockey East tournament and NCAA tournament games). The Eagles have won 14 straight of those, dating back to March of 2009.

BC wins 6-4 in a close fought, high paced game.

#2 UNH WILDCATDS vs. #4 MERRIMACK WARRIORS
Merrimack beat UNH twice, and are the upstart surprise of Hockey East. They've struggled on the road, but it will be interesting to see how they perform on neutral ice. UNH had a brilliant regular season, but they're sort of like the snow on the ground. Overwhelming in January and February. Melting away in March. 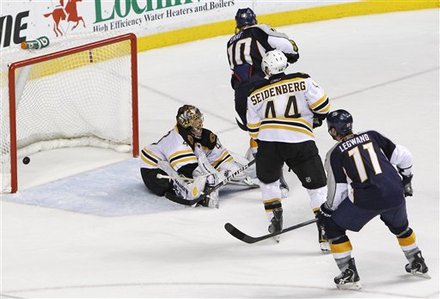 The Bruins didn't play bad, but they didn't play good enough. It's amazing to watch opposing teams step up their intensity, and then see the Bruins fail to answer. It's a routine we've seen all too often under Julien. The Bruins haven't ended regulation with a lead since March 3rd.

Give plenty of credit to Pekka Rinne, who is perhaps the 2nd best goalie in the NHL right now. His name also sounds like a delicious pasta dish, served Alfredo. He made a some pretty big saves, most notably on Lucic and Ryder.

But when were the Bruins the clearly superior team? They never were. And their PP unit continues to struggle. When are the coaches going to evaluate their strategies and say "maybe this whole idea is wrong?" If they haven't yet, they probably never will.

I did like the line of Seguin-Peverley-Kelly. I think Seguin and Peverley compliment each other very well, and Kelly brings a physical presence. That's a decent 3rd line right there. Even though it's comprised of 3 centers.

But I do like using this time of year to evaluate how the team performs in tough situations. Nashville played tough last night. The Predators are already in playoff mode, fighting for that final spot in the West. And this game reminded me of all the potential series winning games the Bruins lost last year and the year before. The Bruins gave it 9 out of 10, but the Predators gave it 12 out of 10. And that's what we'll see in the playoffs, if the Bruins are fortunate enough to be on the verge of eliminating an opponent. Which I kind of doubt.