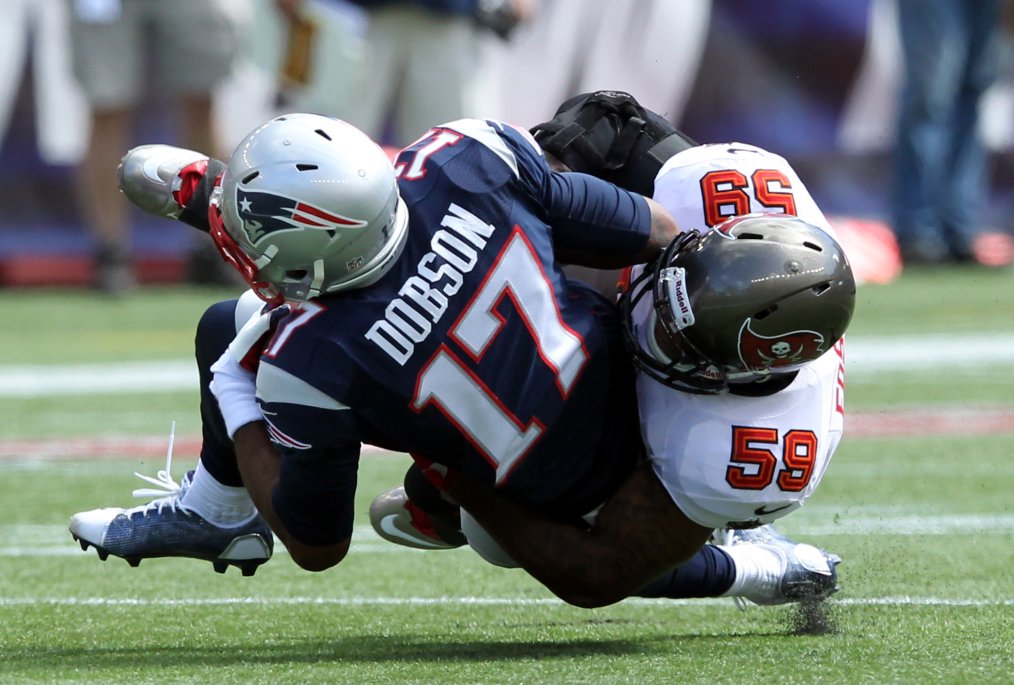 In retrospect, the Patriots had every edge coming into this game. They had extra time off. They're familiar with the Buccaneers after practicing with them and playing them in preseason. Josh Freeman is a negative player at quarterback and probably won't be QB for much longer. Even the weather cooperated by kickoff and gave the Pats a nice day, with no rain-assisted random turnovers or slips.

The offense still looks like a pickup game that's been thrown together at the last minute. The lack of healthy ball-catching talent (BCT) on this team has tested Josh McDaniels, and so far he's barely passing. He was an apparent genius in 2007 when he had Brady throwing to Moss, Welker, Stallworth, and Kevin Faulk. Anyone could have coordinated that Madden offense to break records. 2013 has been much more challenging.

If this were a college course, I'd recommend McDaniels take it pass/fail, because his grade will just hurt his GPA. It's not, and the offense will need to do more than barely pass for this team to succeed. It is still only September. Super Bowls aren't won in September, just regular season games. And all this team wanted to do was survive the early season until injured players like Gronkowski returned.

The defense continues to look sharp. You can tell how much faith Belichick had in the defense (at least when they're playing against the Buccaneers offense) when the Patriots offense went for it on 4th and 2 in the 2nd quarter. Even if the Pats didn't get it, Belichick trusted his defense to hold the Buccs.

Fourth down decided this game. Tampa Bay went for it on 4th down 4 times and failed each time. The Pats converted a 4th and 2 then scored to go up 7-3, then the defense stopped Tampa on 4th down, then the Pats scored on their next possession, then an Aqib Talib interception set up a field goal and it was 17-3 Pats. If the Pats don't convert their 4th down and the Buccs convert theirs, then the halftime score might have been 10-0 or 10-3 Buccaneers. The Patriots offense couldn't put any drives together in the second half, so that 2nd quarter stretch of scoring won the game for them.

The rushing offense wasn't great, but it wasn't bad. It was certainly better than it was against the Jets. And that made a difference in the 4th. On one drive LaGarrette Blount rushed 8 times (6 in a row) for 56 yards. The drive drained 4:41 of clock and sealed the game. Somewhere Corey Dillon was smiling.

Brandon Bolden also had a big game with 100 total yards, most of which came in a 46 yard reception.

Brady spread the ball around like he used to (was forced to) back before 2007. Six different Pats caught receptions, 8 were targeted. Michael Hoomanawanui caught 2 passes, bringing the catch total for Patriots tight-ends up to 3 for 35 yards. To put that in perspective, Patriots RBs have caught 14 passes for 119 yards this season. Brady doesn't even look at tight-ends anymore. Only 7 targets between Hooman and Zach Sudfeld in 3 games.

Before the season started we just wanted the Pats to survive the first few weeks without Gronkowski. They've done that so far. Four of their next 6 games are against tougher opponents, but they also play the Jets and Steelers. The team is doing what they need to do at this time of year, in this situation. And they could quite conceivably go into the bye week with a 7-2 or 6-3 record. I'll take that given the circumstances.

Next week it's Sunday Night Football in Atlanta.