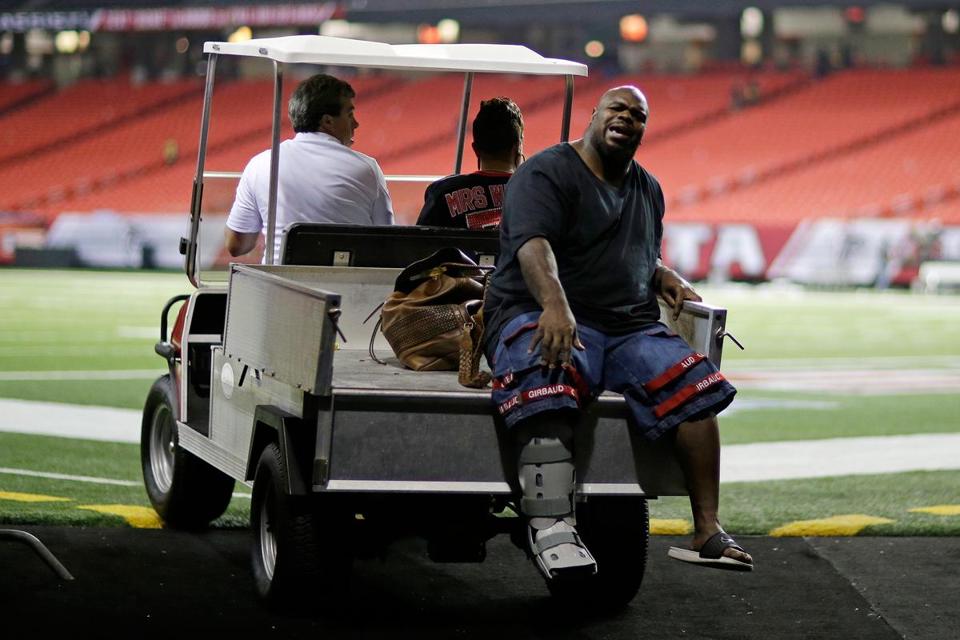 The golf cart he rode is still listed in critical condition.

Just when you thought you could be joyful about the Patriots, you learn that their most important defensive lineman will probably miss the rest of the season. Reports circulating the internet claim that he tore his Achilles Sunday night. And an injury of that severity typically takes 6-9 months to recover from (source).

The Pats defense has been relied on to win games this year. If this report is true, it drastically alters the shape of that defense. Completely filling the gap left by Wilfork is impossible. Vince Wilforks don't grow on trees (if they did, the branches would have to be quite strong, and when ripe Wilforks fell to the ground they'd make a big dent. You wouldn't want to sit under a Wilfork tree for shade). Wilfork absorbs blocks, helps stop the run, and is the cornerstone of the front seven. Now all his responsibilities must be spread among the other players up front. Sunday night we saw two rookie linemen record sacks. They're going to have to continue to perform in Wilfork's absence.

But injuries are part of the game. Considering how involved he is on defense it's amazing that he's never been seriously injured up to this point in his career.

The Broncos Don't Impress Me Much 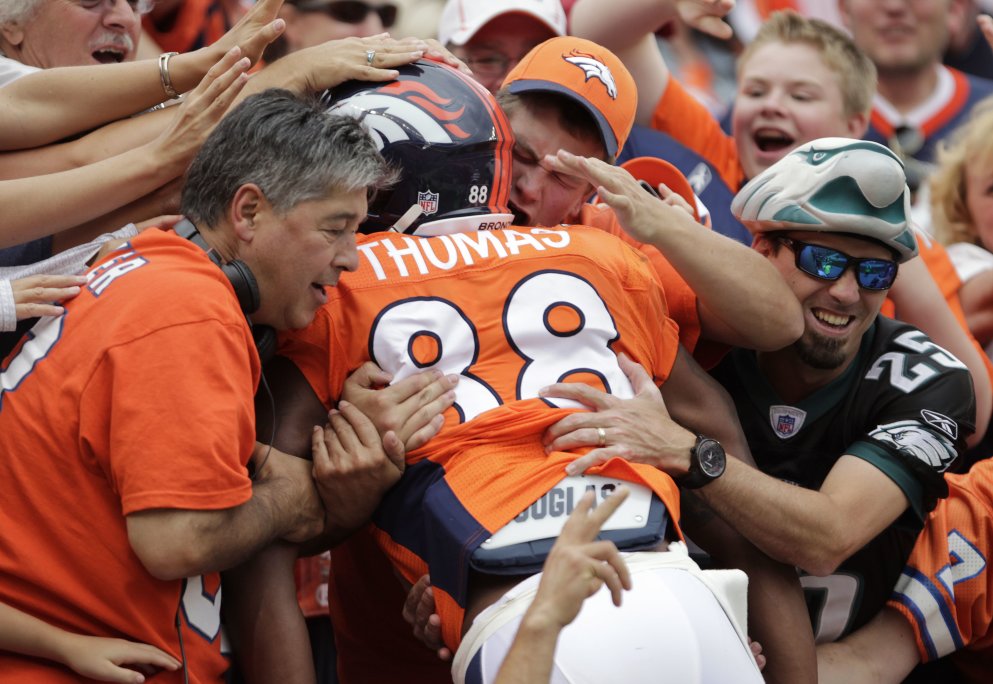 What's with the Eagles fan hugging Thomas in this picture? Weird.

I've seen this show before. In 2007 with the Patriots. That team had an offense so good that most NFL teams couldn't handle it. The margins of victory inflated as opponents tried in vain to keep up. And the Pats kept piling on the points.

Speaking of which, why the hell did Denver kick a field goal up 49-13 in the 4th quarter Sunday? With 6:53 on the clock and on 4th and 11, the Broncos attempted a 53-yard field goal to increase their lead from 36 to 39. This difference would have made the Eagles try for 2-point conversions 4 times instead of just once. That is if the Eagles managed to score 5 touchdowns in the remaining 6:53.

Why kick that to go to 52? Why not go for it on 4th down, probably fail, and let the clock eventually tick to 0?

Anyway, the Broncos remind me of the Oregon Ducks. Which is funny because they beat Chip Kelly on Sunday. For all of Oregon's offensive prowess, they haven't won a National Championship. Ever. They've been to one BCS title game and lost to Auburn, 22-19. Legions of pundits seem to think that NFL teams want to be like Oregon, but they don't. The Ducks' system doesn't even work in college. There are some interesting things to learn about it, but overall its success has been drastically overshadowed by the traditional fundamentals of Alabama and other SEC teams.

What happens is Oregon beats the tar out of weaker competition, like Portland State, like Washington, like Washington State. But when they get into a tight, tough game, especially one that requires the defense to step up and make plays, they fail. In the early season against weak competition they routinely score 40, 50, 60 points per game. And everyone sucks their kneecaps for scoring 7 TDs against inferior opponents. Then they get tested and either the offense can't score at will or the defense can't contain their opponent when it matters most.

And the Broncos seem so much like the Ducks. I don't care about margin of victory. Win a tough, close game and then I'll be impressed. Or dominate a team that can play on the same level talent-wise.

The Broncos are in Indy on October 20th and that's a test. In November they play the Chiefs, then the Pats, then the Chiefs again. That Sunday Night game in Foxborough will be like the Oregon Ducks travelling to Stanford.

Until then, I'm as impressed with the Broncos putting 52 up on the 1-3 Eagles as I am with Oregon scoring 55 against 1-3 Cal or 66 against Nicholls State.

Photo Credit:
AP Photo, Joe Mahoney
Posted by rob at 11:00 AM No comments:

Patriots Win as a Team in Atlanta 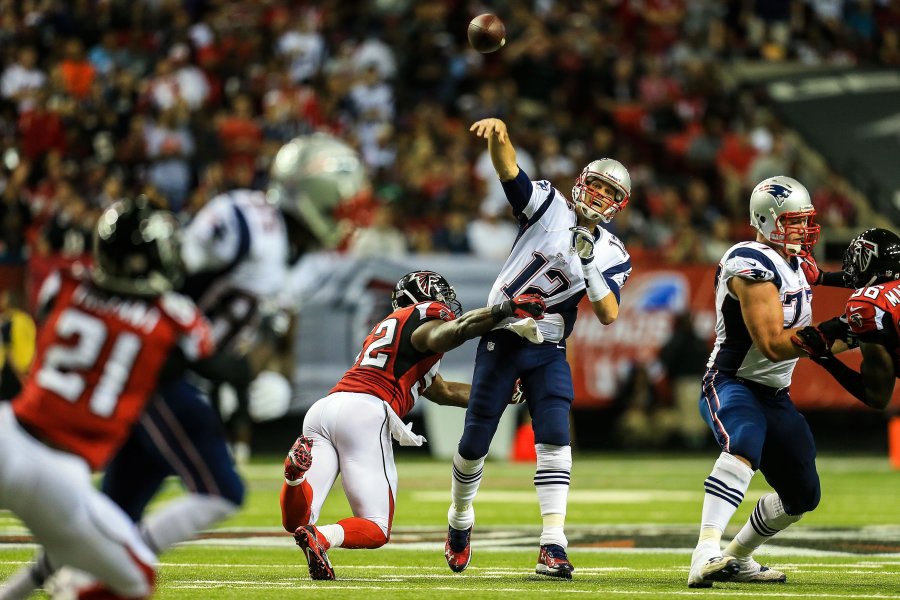 This is no longer just Tom Brady carrying the roster on his back. Win or lose, this will be a group effort in 2013. From Brady to Thompkins to Talib to Blount to rookie defensive linemen nobody has ever heard of to Pro Bowl offensive linemen protecting Brady and opening holes for the running backs. Team, team, team.

Aqib Talib's Sunday Night performance was a masterpiece. Ryan threw at him 8 times, and only completed one of those passes. Talib hauled in his 4th interception of the season, and he defended 4 passes, including the game-clinching 4th down pass in the end zone. His presence on the field is a necessary condition of the Patriots winning against good teams. Without him, the Pats are screwed.

The offensive line also stepped up. They protected Brady on 3rd and 19 so he could hook up with Kenbrell Thompkins. On the next play Dan Connolly pulled and opened up a large gap for LeGarrette Blount to barrel through and then sprint to a 47-yard TD.

It wasn't a completely clean victory for the Pats. Zach Sudfeld bobbled an onside kick and gave Atlanta some life. Brady had his second fumbled snap of the season, which is 2 more than I can ever remember him having. That was on a huge 4th and 1 play. And Dont'a Hightower still struggles in coverage.

The Falcons contributed by committing several unforced errors which made the Patriots' path to victory much clearer: Going for it on 4th and 2 so early in the game, an obviously excited Matt Ryan overthrowing on that same 4th and 2 play, a few key penalties, some drops. The Falcons are just too tightly wound to win in big games. There's no composure, only a hurried over-eagerness to make a big play.

The Patriots passed a test and are 4-0. And that means what? The combined record of their opponents is 5-11. So we shouldn't be crowing the Patriots just yet. It's barely autumn.

However, the goal for the first half of the season was to tread water until Gronkowski returned. The Patriots are 4-0 without him. And have won 3 without Amendola. And just won without Wilfork for most of the game. I'll take 4-0 with all these injuries, regardless of the caliber of opponent. The Pats have achieved their quarterly goals.

They remain on the road against a decent Bengals team that's 2-2, but also 2-0 at home.

Photo Credit:
Daniel Shirey - USA Today
Posted by rob at 10:00 AM No comments: