How BC Football Can Turn Itself Around 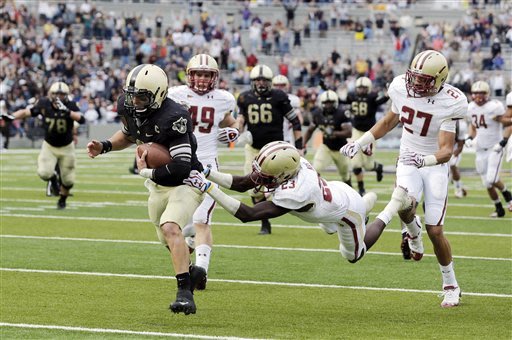 It's a rough time for Boston College football. The Eagles are 1-5 and that one win came against Maine. They're 113th in the country in rushing, 86th in scoring offense, and 99th in scoring defense.

Both on the field and off it, the team needs new direction. People like to focus their blame on head coach Frank Spaziani, but the problems with the program go beyond coaching. They're philosophical and fundamental.

Specifically, the athletic program needs to realize that the football team is a step-program, a place for coaches to prove themselves before moving on to bigger things. And that's fine. It's okay to be a place where coaches come and go because they got a job offer from an NFL or an SEC team. Most college football teams are like that.

On the field, the traditional offense needs to go. College is a place for experimentation, and not just in science labs and not just by students on a Friday night. Get gimmicky. Try the option. Or a no-huddle style like Oklahoma's or Oregon's. Get creative, be entertaining, be deceptive, be clever, be tricky, be unpredictable. If D-III and high school teams can run the option, so can you.

Schedule more interesting non-conference games. Notre Dame becoming an ACC partner in football is great news for BC. So is Syracuse joining the ACC. And USC will be in Boston in 2014. But Maine? Stony Brook in 2013?

BC is starting a series with UMass soon, and that's smart because the Minutemen are now in the FBS. It would be even smarter to play them at Gillette Stadium, where fans could tailgate in the lots as opposed to riding the schoolbus to games at Alumni Stadium.

BC should play UConn as well. There's a potential for a regional rivalry there.

Speaking of UConn, BC should play a home game at Fenway Park. UConn and Notre Dame are considering it for 2014, but it would be a great spectacle for BC to play NC State or Maryland or Virginia at Fenway. It's 4 miles down the road, the ACC would love it, and it would give the program tremendous local publicity.

I'm a BC fan. And as a sports fan in Boston, it'd be really cool if the Eagles were relevant in college football again. As well as being relevant in Boston. These steps, along with some good recruiting, would go a long way to make that happen.

The Difference Between Girls' Soccer and Men's Soccer

Had this occurred in a men's soccer game, the guy who got kicked would act as if his chest had been caved in, his lungs had collapsed, and he was on the verge of death. He would have flailed and twitched around until the ref awarded a foul.

But in girls' soccer you adjust your sports bra and get on with the game.
Posted by rob at 12:00 PM 1 comment:

Email ThisBlogThis!Share to TwitterShare to FacebookShare to Pinterest
Labels: Soccer

Yesterday I wrote an angry rant about hating Curt Schilling. I sent a Tweet to Mr. Schilling's account (@Gehrig38).

And shortly thereafter, Mr. Schilling's account had blocked mine.

Granted, I could have been more clever with that headline. Maybe make him think I'd written something defending him. Maybe I could have been vague and said "A blog post about 38Studios." That might have been a sounder strategy because I don't think he even read what I sent him.

Then again, I didn't want to be deceptive or evasive. That would have been Schillingesque of me.

Regardless, it's just another example of Curt "Bob and Weave" Schilling avoiding tough questions. He made a career of having a big mouth and calling other athletes out. Then he screws up and can't address what he did, or why he did it. Except to WEEI's Dennis and Callahan who each had to ice their jaws after so much ball-washing.

I know this is old news, but that's what pisses me off. We obsessively rage at something for 72 hours, then move on to something else. And in this case, the rage should have lasted until Schilling showed genuine contrition instead of blaming the Rhode Island Governor.

We forgot about how much of a hypocritical jerk Schilling was. He hid, we moved on, and he's escaped the humiliation and humbling that his actions deserved. Curt Schilling is a coward.
Posted by rob at 11:00 AM No comments:

What Will the NHL Players Do?

The NHL owners made an offer to the NHLPA that included a 50/50 share in hockey related revenues. The offer also included stipulations that player contracts not exceed 5 years, as well as changes to free agency and arbitration eligibility.

It's a lot of legal mumbo jumbo after that. The players have concerns about deferred payments, points of contention about the time until arbitration eligible, stipulations about revenue sharing. And so on.

Basically, it's stuff for lawyers.

I've been considering Law School for awhile now and all these sports lockouts and CBA negotiations are pushing me closer and closer to taking the LSATs. It seems like the best path to make serious money in pro sports isn't playing basketball at Kentucky or football at Alabama, it's to take Law classes at Suffolk.

Anyway, the fact that the NHLPA needs time is a good thing. They aren't instantly rejecting the offer. They need to digest it, hammer out some details, negotiate a few things. They're giving up a lot, which is always tough. But if both sides bend a bit more, this can get done.

This is a Kama Sutra moment in these negotiations as both parties will need to be flexible. The good news is, they seem to want to get in bed together. Figuratively speaking.
Posted by rob at 10:00 AM No comments: