Dan Wetzel at Yahoo! wrote a very good piece about Riley Cooper, suggesting that the Eagles WR should apologize to the black security guard he said the N-word to, and that the man who was the target of the slur has been lost in the conversation.

Cooper didn't just use the word in a joke, or in a general way, he said it to a person. And in a threatening way. This 6' 3" 222 pound pro athlete felt the need to try to intimidate some security guard, and used the slur to do it. And he was quite comfortable using it in conversation.

I don't know if Cooper is a racist or not. His teammates might have forgiven him. And he'll undergo some sort of bogus "anger management" or "racial sensitivity" training after this incident. And these classes will mean as much to him as his classes at Florida meant. He'll show up, pass without trying, and move on with his life.

He'll learn to not use that word. He'll learn to behave himself in public, especially when someone is holding their phone up and obviously recording. He will not, however, learn how to avoid be a douchebag.

He was pissed off at the security guard because he couldn't get backstage. As if Riley Cooper is a recognizable face (especially in a sea of fake-hicks wearing plaid cutoff shirts) and should be granted limitless access wherever he goes. Cooper probably could have gone through his team in order to get backstage, it happens when concerts are held at sporting venues. I'm sure the team would have found a way to accommodate him. Instead, Cooper wanted to skip all that and be recognized as better than everyone else. The security guard did his job, and he got called a nigger for it.

Yes I typed it. I typed it because Cooper said it. And he said it in a threat. What Cooper did was absurd, and his absurdity needs to be reinforced by actually using the word Cooper used.

To reiterate, Cooper is 6 foot, 3 inches tall. He weighs 222 pounds, almost all muscle. He's a pro athlete in a physical sport. And he was threatening someone. Cooper has to be the big, tough man. He had to threaten the guy who didn't bow down before him. He had to find a way to insult and belittle the security guy. Because how dare that NOBODY get in the way of Riley fucking Cooper?

By the way the Patriots and Eagles are practicing together next week. The practices will be closed sessions. I hope Adrian Wilson jacks this douche-nozzle up. Then Cooper will be asking security guards at concerts where he can keep his crutches.

Also, kudos to the security guy for not flipping his shit and going after Cooper. 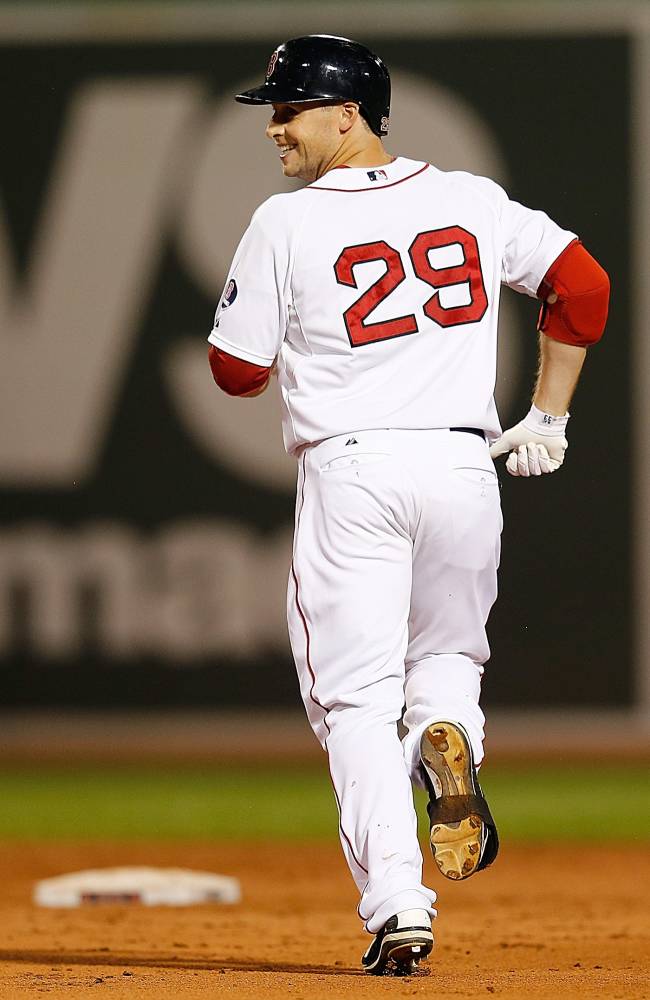 I officially have a boner for this team. I am excited, eager, a little sweaty, and generally pumped about this team.

They weren't supposed to win this game. Ryan Dempster vs. Felix Hernandez. Down 5 runs in the 9th. And I was fine with that. The Sox won the 15 inning game the night/morning before, and losing to Hernandez is completely excusable. We had all printed a pass for the Sox when and if they lost this game.

The Sox were not fine with accepting that pass. They took advantage of a bizarre 9th inning which saw an opposing manager use the wrong arm to signal a pitcher, and a very hitter-friendly strike zone from home plate umpire David Rackley. Perhaps that was karma from the blown call at home plate against Tampa Bay on Monday.

And not only did the Sox win, they won in 9. They didn't get involved in another draining extra inning game. They finished it in 9 and preserved their energy for Arizona this weekend.

Once Hernandez left the game, with a comfortable 6 run lead, Shane Victorino hit a homerun. It didn't seem to mean much at the time. It would wind up meaning quite a bit.

Daniel Nava started off the 9th with a walk. Lavarnway singled, Holt doubled, Nava scored. Then Ellsbury walked. Mariners interim manager Robby Thompson wanted a righty to face Victorino and Pedroia. But on his way to the mound he tapped his left hand. The umpires caught this and forced the Mariners to put a lefty in. Victorino singled to knock in 2, Pedroia singled to make it a 7-6 game. Ortiz struck out against the lefty, then Thompson finally got to put in the righty he initially wanted. Gomes singled to tie the game, Drew walked, and Nava finished the inning he started with a fly-ball to deep center. Once it left his bat there was no doubt the game was over.

The Sox start a 3-game series with Arizona tonight. Lester faces 23-year old righty Randall Delgado. This is a chance for Lester to be Ace-like, or semi-Ace-like, and continue the momentum the Sox have built this week. Or it's his chancy to be Lester the mope, and ruin everything.

Photo Credit:
Jim Rogash/Getty Images
Posted by rob at 9:30 AM No comments: